Review: Meeting Steven Spielberg, after all these years, in ‘The Fabelmans’ 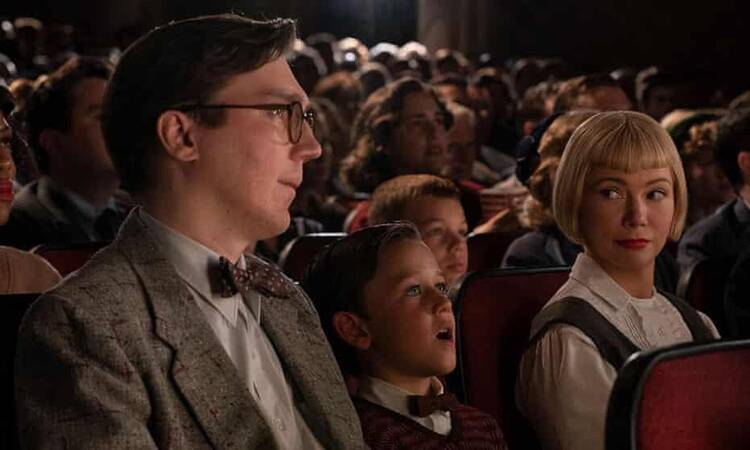 I feel like I have been in a relationship with Steven Spielberg my entire life. “Jaws” came out when I was just about six, “Close Encounters of the Third Kind” when I was eight, and even though I wasn’t allowed to see either one because I was too little, they both still messed me up pretty good. If I’m in a body of water where I can’t see the bottom or even a big pool, really, I will pretty quickly begin to imagine a shark reaching up out of the depths, moments away from tearing into my belly and shaking me like a rag doll as it rips me to pieces. I spent a lot of nights of my childhood visualizing aliens coming to the window of the second-floor room I shared with my brother to take me away, too.

Something tells me Spielberg would like to hear that, not because he has made me afraid to step in a swimming pool, but because his film stirred up my imagination. Even as he has told some very important and challenging stories, movies like “Schindler’s List” and “Amistad,” as a filmmaker he has often aspired to be a prophet of childlike wonder, that grinning, enthusiastic kid who made “Jaws” still finding corners of the universe and aspects of our humanity to raise up in surprise and delight.

At this point what could Steven Spielberg possibly have to offer? The answer, it turns out, is himself.

Having said that, I’ve been with Spielberg so long that when a new movie of his comes out, I often don’t rush to see it. I’ve done Spielberg, I think to myself. I know him. At this point what could he possibly have to offer?

The answer, it turns out, is himself. Over the years a number of Spielberg’s characters have been portrayed as semi-autobiographical: Elliott from “E.T.,” a child of divorce like Spielberg, who finds hope in the stars; Richard Dreyfuss’s Roy Neary, who becomes so obsessed with the U.F.O. sightings in “Close Encounters” that he starts to build versions of Devil’s Tower similar to a director’s model of a set. Tom Hanks, too, who has appeared in five Spielberg films over the years, seemed to become a stand-in for, if not Spielberg himself, certainly what he values—goodness, sacrifice, community.

But with “Fabelmans,” Spielberg delivers a genuine memoir. Co-written by the Tony- and Pulitzer Prize-winning Tony Kushner, the coming-of-age film tells the tale of Spielberg-surrogate Sammy Fabelman (Gabriel LaBelle) as he falls in love with making movies, while his parents Burt (Paul Dano) and Mitzi (Michelle Williams) are falling out of love with each other. The story has some of the notes for which Spielberg has become known, like that characteristic sense of wonder.

But part of what distinguishes the film is Spielberg’s resistance to standard tropes. While at first it seems like computer engineer Burt is a cold fish holding back his luminescent and magical wife Mitzi, in the end Spielberg views both of them, and the man who comes between them (Seth Rogen in a wonderfully awkward and understated performance), with tremendous kindness and understanding.

The story of Sammy slowly becoming a filmmaker is less a celebration of his talent than Spielberg’s attempt to express his own fears about the life he has chosen.

Meanwhile the story of Sammy slowly becoming a filmmaker is less a celebration of his talent than Spielberg’s attempt to express his own fears about the life he has chosen. At various points Spielberg cuts from what is happening to Sammy watching it unfold. In other movies like this, the point is, Ah look at the boy becoming an auteur. But here, the feeling is instead quietly bittersweet. Yes he sees things others don’t, but he also stands apart from them.

Sammy recognizes this, and doesn’t like it. Near the film’s midpoint, journeyman actor Judd Hirsch shows up to deliver a show-stopping performance as Sammy’s Great Uncle Boris, a former circus lion tamer who moved to Hollywood and has spent his life performing. It takes him about five minutes to see in Sammy a kindred soul. “You’re going to join the circus,” he says to Sammy. “I can tell. You can’t hardly wait.” When Sammy says he’s not, Boris insists, “You’ll make your movies and you’ll make your art…but it’ll tear your heart out and leave you lonely. You will be a shanda [disgrace] for your loved ones, an exile in the desert, a gypsy.”

“Family we love,” he tells Sammy, “but we’re meshuga [out of our minds] for art.”

It’s a shocking take from Spielberg, a man who has seemed so genuinely happy making films, his public persona less celebrity director than cheerful dad who regularly embarrasses his kids with how excited he gets about amateur radio. There is real heartache here, and a touching uncertainty.

There is real heartache here, and a touching uncertainty.

The second half of “Fabelmans” focuses on Sammy’s experiences in high school when his family moves to California—the antisemitism he faces, the girl he falls for. It’s well-crafted, and also important. Spielberg does an excellent job of showing the bewilderment and the rage of having Christians bully you simply because you are Jewish. At a time when reported incidents of anti-semitism in our own country are higher than they have been in over 40 years, and are also in some quarters excused or normalized, I wish every Christian would watch this film simply to experience that. (The incidents depicted apparently come directly from Spielberg’s childhood.)

But the heart of Spielberg’s story remains his confrontation with himself as a filmmaker—the passion he feels and his fear of what it might have cost both him and those he loves. Near the end of the film he asks his father—who has been until now the biggest opponent of his filmmaking aspirations—whether he shouldn’t just give up. “We’re always going to be in each other’s lives,” his father unexpectedly reassures him. “We’ve come too far to not be there until the end.”

It seems crazy to say this, given the number of films he has made and the impact that they have had, but watching “The Fablemans” I had the sense that I was witnessing Spielberg speak in his own voice for the first time. It seems as though all these years he has been like the Wizard in Oz, capable of generating awe and wonder in others but trapped hidden behind the curtain himself.

Spielberg says in all his films he’s been “poking around the edges” of his own story. “I can’t think of a single film I’ve directed that hasn’t had some personal element,”he told Vanity Fair in November. But telling his own story, which he had been contemplating for decades, “was maybe one of the scariest lines I’ve had to cross.”

Personally, I hope he crosses it again. Mechanical sharks and the bright lights of alien starships may generate thrills and nightmares. But the vulnerability and humanity Spielberg reveals in “The Fabelmans,” right down to the film’s marvelous last shot, is truly beautiful.