Jordan Peterson and Jesuit Bernard Lonergan have different takes on a culture in decline. The church should listen to both. 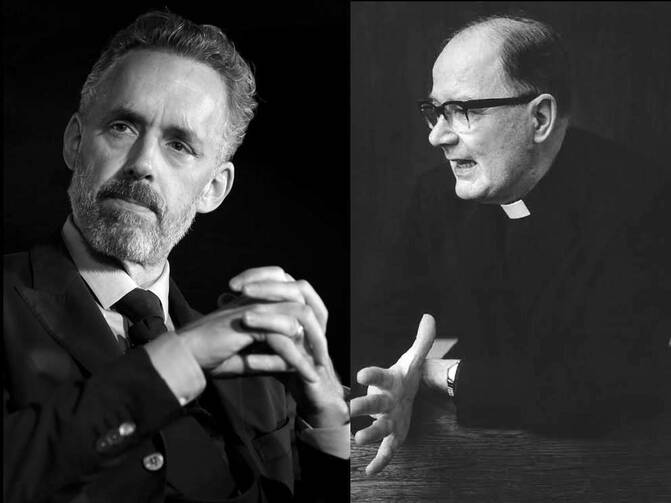 Can we know and choose meanings and values that will make us worthwhile and happy? Can we know who we are and ought to be? Can we know ourselves, construct community and relate to God and others wisely and well?

Jordan Peterson argues we can find meaning even in the chaos and suffering of life. Bernard Lonergan, S.J., demonstrates how to transcend ourselves in knowledge, how to heal our culture, how to discern and discover truth, and how to relate to the loving mystery of God. Father Lonergan shows us the way to progress and how to counter the forces of decline. These two Canadians address our punishingly polarized, religious and cultural controversies—but in radically different ways.

Who is Jordan Peterson?

Peterson, a public intellectual, global phenomenon and omnipresent YouTube star, is a clinical psychologist and a superb speaker. He revels in denouncing the postmodern denizens of contemporary academe. He discovers deep meaning in everything from academic journals to biblical stories to classical literature to Disney movies to Harry Potter to the lives of his two children. Peterson decries Jacques Derrida’s proposition that all is interpretation and Michel Foucault’s assertion that everything is just a struggle for power.

Peterson preaches that our existence is structured by natural hierarchies, rooted in nature. Inequality has its benefits (although he realizes too much inequality is eventually destructive). Gender fluidity, most leftist ideologies and some contemporary movements for social justice (e.g., Black Lives Matter) are targets of his withering critiques. He argues that such utopian visions are ultimately harmful to the persons they pretend to assist. He is rightly haunted by his extensive studies of the worst people, places and events of the 20th century: Hitler’s atrocities, Stalin’s gulag, Mao’s cultural revolution and the Khmer Rouge’s killings.

He defends capitalism, supports those who lean toward the maintenance of the status quo, and questions those who too quickly and unreflectively tear apart established orders without knowing where such revolutionary energies eventually lead.

For Peterson, the best we can do is devise strategies for balancing the threatening forces of chaos with order.

For Peterson, the best we can do is devise strategies for balancing the threatening forces of chaos with order, characterized by sensible freedom and societal compromises that do not allow liberties to develop into tyrannies. His astute analysis of the difficulties of perception calls attention to the ways in which our own internal functioning(s) cause us to see the world in certain ways. Curiously, he approaches questions of being and God but pulls back from definitive pronouncements on such matters. Maybe this is a sign of an admirable heuristic humility. But in the final analysis, he offers more means of survival than reasons for transformative grace and hope.

Peterson’s two best-sellers, 12 Rules for Life and Beyond Order (along with his earlier academic tome, Maps of Meaning), provide observations and stories, many from Peterson’s personal life and clinical practice. Like Scott Peck’s 1978 The Road Less Traveled, whose first words were “life is difficult,” Peterson begins with the pain and suffering of human existence. He trumpets his message, especially to young men: Get your act together. Don’t expect anyone to make life easy for you. Confronting life’s inevitable tragedies and tribulations requires sacrifice. Get off the couch in your parents’ basement. Choose a path. Work to make things the way you want. Be honest, truthful and wise. Be strong. Be heroic. In doing so, you will find a meaningful life and be a worthwhile person.

Who was Bernard Lonergan?

Among the Canadian Jesuit Bernard Lonergan’s works are two major undertakings: Insight: A Study of Human Understanding (1957) and Method in Theology (1972). Both are demanding but rewarding reading (hint: Start with Method). Lonergan describes our lives as part of cosmic processes of emergent probability. Cycles of progress and decline characterize human history.

The rock on which we can build is the transcultural, transtemporal, self-evident fact of the deep and disinterested desire to know that characterizes human persons. To disagree with Lonergan’s starting point is contradictory: Such disagreement demonstrates the desire to know at issue. For Lonergan, the act of understanding reveals our cognitional structure, which reveals a metaphysics (what is really real and true) and ushers forth an ethics (the revelation of what we ought to do).

For Lonergan, conversion is key. Our commitment to authenticity, lived in our accepting the wisdom of the transcendental precepts, makes for progress.

Lonergan’s method is transcendental. The appropriation and practicing of Lonergan’s method lead us beyond ourselves to relations with others and, ultimately, God. The point is self-appropriation of our consciousness, i.e., awareness, on the levels of experiencing, understanding, judging and deciding. Each of these levels reveal intrinsic transcendental precepts, or rules: Be attentive, be intelligent, be reasonable, be responsible. I would add that creative action calls us to be loving.

Lonergan profoundly analyzes evil rooted in the reality of bias. As much as we desire to know and desire to come to the act of insight, we can be blind or obstinate, and thus can resist the challenges of the transcendental precepts mentioned above. Bias operates on personal and communal levels. We screen out data (e.g., racists’ refusal to realize that other races are equal); communities and cultures can become corrupt (e.g., Nazi abominations); one can authentically appropriate an unauthentic culture and meaning system.

Bias also can infect our common sense, causing us to judge social problems in overly simplistic ways. Take gun control as an example. Many people coming from theoretical approaches ask questions like the following: Why do we see mass murders almost daily in the United States, while other nations see so few? Why are so many incomprehensible mass shootings carried out by unhappy, isolated, friendless, young white men? Why are so many murders in our cities the result of young Black men killing young Black men? Why do we refuse to sanely regulate guns? There are no simple, common-sense answers to such questions. And yet note that it is not uncommon to hear simplistic dismissals like “guns don’t kill people; people kill people.”

For Lonergan, conversion is key. Our commitment to authenticity, lived in our accepting the wisdom of the transcendental precepts, makes for progress. The opposite, inauthenticity, can also lead to decline. Being attentive, intelligent, reasonable, responsible and loving is better than ignoring reality, being stupid, reveling in being unreasonable, refusing responsibility and frustrating the power of love with apathy and hate. By conversion on the intellectual, moral and religious levels of our being, we transcend to the reality of God.

Peterson is well worth reading and hearing, even when one disagrees with some of his pronouncements. Further, his popularity and impact force us to ask: What need in the culture and times is he fulfilling? His recipes for finding ways to good and true humanity are attractive to many, albeit those who are dissatisfied with the more leftist readings of social reality. Ultimately, Peterson argues that the only way to set the world right is to fix oneself.

Lonergan, on the other hand, realizes that we can only truly meet our challenges with collective effort. The group, not the individual, transforms culture. Lonergan’s owner’s manual for humans also goes wider and deeper than Peterson’s binary of chaos and order.

In Chapter 7 of Insight, Lonergan describes his theory of “Cosmopolis,” an analysis of social reality written in the 1950s in the wake of World War II that sounds eerily like a prescription for the ills of our present world. Cosmopolis recognizes that overly individualistic solutions are not viable. We are all in this together. We, not just I, must respond to the challenges of our times. Matters like climate change, extreme income inequality, racism and sexism require a transformation of ourselves, our communities and our culture.

Cosmopolis is the yet-to-be-constructed set of social relations that will make a world of peace and liberty and justice for all. It calls us “to speak the simple truth though truth has gone out of fashion,” as Lonergan puts it; to open ourselves and our communities to solutions and answers we often want to avoid. But Cosmopolis is not easy to construct, because the cycles of progress and decline are not understood by common sense, and our different theories about progress clash. We need the grace of a higher viewpoint.

For Lonergan, that higher viewpoint is faith, the knowledge born of religious love. Aquinas taught that grace is the ability to do what we could not do before. To avoid the descent into new forms of totalitarianism, to become who we deeply desire to be, we must discover how to relate to one another and God in ways that increase freedom and love while diminishing the destruction of decline.

Faith is also about opening ourselves to God setting things right. Authentic ways of knowing and choosing and loving lead us to “being in love with God,” Lonergan writes in Method in Theology, and that love is “the basic fulfillment of our conscious intentionality. That fulfillment brings a deep-set joy…. That fulfillment brings a radical peace.… That fulfillment bears fruit in a love of one’s neighbor that strives mightily to bring about the kingdom of God on this earth.” Further, the failure to reach such fulfillment fills us with “the conviction that the universe is absurd.”

Both Lonergan and Peterson realize our most excruciating conflicts are over meaning. Peterson’s emphasis on the individual causes him to neglect the power and creativity of community, while for Lonergan, common meaning constitutes community. Still, our church and world will benefit from both voices: Hearing the contemporary longings to which Peterson responds, and studying Lonergan’s paths to realizing the fulfillment of our deepest desires and, ultimately, our redemption.

Richard G. Malloy, S.J., is director of mission and ministry at Cristo Rey Jesuit High School in Baltimore, Md., and the author of Being on Fire: Top Ten Essentials of Catholic Faith and Spiritual Direction: A Beginner’s Guide.