Farewell to ‘The Walking Dead,’ a surprisingly moving exploration of grief and loss 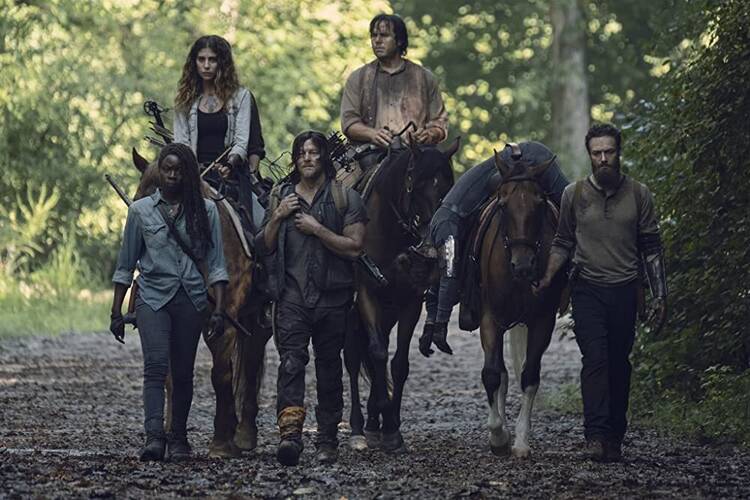 The cast of ‘The Walking Dead’ (IMDB)

When people look back on “The Walking Dead,” which ends its 12-year, 11-season, 177-episode run on AMC this month, they’re likely to remember it as “that zombie show.”

But rewatching the pilot recently, I was stunned to be reminded of just how much depth and heart the series brought to that idea. For most of that episode, we watch as Deputy Sheriff Rick Grimes (Andrew Lincoln), having awoken from a coma to discover society has mysteriously collapsed, wanders through a seemingly abandoned world. On his way home he comes upon the rotting upper body of a woman, and is paralyzed with fear when it suddenly turns over and begins to drag itself toward him. (One of the great initial ideas of the show and the comic book upon which it is based was to place at its center not the typical damsel in distress but a frightened man.)

Later in the story, having gotten himself together (and gathered a large cache of weapons, a “Walking Dead” staple), Rick returns unexpectedly to that woman. And instead of showing disgust or horror, he quietly grieves for her. “I’m sorry that this happened to you,” he says, after a long silent moment of simply watching her struggle to continue to pull herself along.

For years, “The Walking Dead”was a show that found within its horror-movie conceit a chance to explore questions of grief and loss in ways every bit as resonant and deep as more critically acclaimed shows like “The Leftovers” or “Six Feet Under.” It was also just a great roller coaster ride. You could see the writers pushing themselves to create dilemmas that had never been done in a zombie movie before—trapped in a dumpster, in a military tank, in a revolving door—or to think through the implications of the zombie mythology in new ways. One of the major conflicts of the show, one that never fully went away, was the reality of having to kill beings that still seemed alive. Could a loved one still be “in there” in some way? How could one truly know?

Near the series finale, a child zombie keeps following Maggie Greene (Lauren Cohan), one of the show’s few remaining cast members from the early seasons. And it is every bit as upsetting to watch as in the early days of the show. In the end Maggie ends up taking the boy in her arms and simply holding it before putting it out of his misery.

One of the major conflicts of the show was the reality of having to kill beings that still seemed alive.

I originally stopped watching the show in Season 7, after Maggie’s husband, the show’s likable Glenn Rhee (Steven Yuen) was beaten to death with a barbed wire-wrapped bat by one of the series’ many insanely violent men. (While this, too, came right from the comic book, it proved to be a massive mistake for the series. The showlost almost three million viewers that year, and almost as many the year after that.) Going through the final set of episodes now, I feel like Rick in the pilot: I don’t know how these people came to this place, but I am very sorry that this happened to them.

One of the persistent storylines of the series is about Rick and his friends running into some other community of people that turns out to be hideous in some way—and having to destroy them to survive. In this final season, our heroes have been integrated into an actual walled society, complete with houses, lattes and pressed suits. In the midst of the nightmare world of “The Walking Dead” it’s a very weird thing to see. But having now once again discovered cruelty and viciousness at the community’s heart, they have spent their final episodes together lurching toward one of the show’s many inevitable blood baths. The villains will no doubt be slaughtered and our characters turned into saviors.

Even more than the comic book, the show has always fancied itself a commentary on society.

Even more than the comic book, the show has always fancied itself a commentary on society. It’s an instinct that makes sense for a zombie story—from its origins the genre has been used to talk about current social ills—and for a television show imagining humanity trying to rebuild itself after a plague.

But in practice that predilection has always been the most exhausting (and by this point exhausted) part of the series. In the end one fascist really does look like another, and the relentless bleakness of the show’s take on society becomes tedious. Returning to that well again and again also raises the question whether the series doesn’t revel in the human-on-human violence that these conflicts create. Or maybe that’s just a quality of its audience. At the show’s final panel presentation at New York Comic Con this October, a clip from an upcoming episode showed the fan-favorite Daryl Dixon (Norman Reedus) suddenly whipping out a knife and stabbing a bad guy through the hand. The crowd went crazy.

In truth, as the characters sneak back into town in the penultimate episode, trying to get to the community’s villainous leader—a power-hungry, deceptive white woman—they unexpectedly reminded me of the attackers upon the U.S. Capitol, another motley group of would-be resistance fighters drunk on conspiracy theories and with a longstanding paranoia about female politicians. In the past those sorts of parallels may have been intentional—one of the show’s great reveals was that the “walking dead” refers not to the zombies but to the living, who have lost touch with so much of their humanity. But in the final episodes these political parallels seem unintentional.

Having caught up on some astonishing moments that I had missed from the series’ recent past—the hopeful-to-the-end death of Rick’s teenage son Carl (Chandler Riggs), the departure of Rick himself and the subsequent final episode of his wife, Michonne (Danai Gurira)—I feel an unexpected sadness that the show is ending. There just aren’t many shows that have offered such profound meditations on sacrifice, grief and love.

In Rick’s final episode, as in his first, he is a confused, mortally wounded man, limping away from a mob of the undead and yet looking just like them. Death is coming for us all, the show reminds us over and over. Yet the stories of these characters facing that reality and still reaching for another day and one another has often been a testament not to horror, but the ineradicable beauty and nobility of existence.