Nathan Fielder’s comedy is hilarious. But that doesn’t give him a pass to toy with people’s lives. 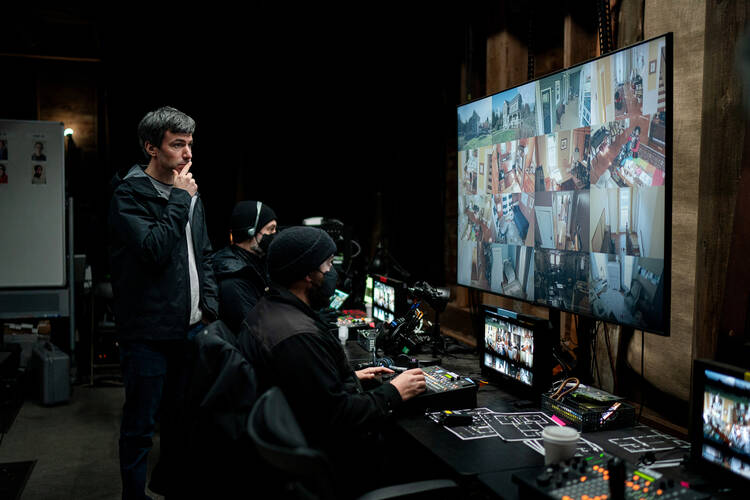 Nathan Fielder was made for HBO. That’s not necessarily because of the prestigious aura that surrounds the platform’s shows, but because like other HBO programs, Nathan Fielder’s comedy is audacious and leans into the bit without relent.

On “Nathan for You” (which aired on Comedy Central from 2013 to 2017), Fielder—masked by his monotonous voice and business-casual mien—provided bogus consultations for real-life small businesses struggling to survive. His solutions involved stunts whose baroqueness was matched only by their budget: In one episode, he arranges for drunk people to run through the aisles of an antique shop in blow-up sumo suits, forcing them to buy the merchandise they broke; in another, he successfully helps a coffee shop gain clout by rebranding it as “Dumb Starbucks,” mermaid logo and all. Fielder’s exorbitantly impractical ideas, coupled with his bizarre and gullible clients, made for some of the funniest TV in recent years.

It’s worth examining whether Fielder’s schtick in “The Rehearsal” is a constructive use of his platform.

Fielder’s new project—“The Rehearsal,” streaming on HBO Max—is an extended riff on this format. This time, instead of helping small-time entrepreneurs, Fielder helps individuals overcome personal challenges by rehearsing scenarios with them, with production values that are even more over the top.

In the first episode, Fielder helps Kor—a single, middle-aged man in Brooklyn—come clean to his bar-trivia friends that he doesn’t have a master’s degree. Fielder builds an exact replica of Kor’s bar in a warehouse and hires an actress to study the mannerisms of one of his trivia teammates so Kor can practice talking to her.

The second and third episodes center on Angela, a woman in Oregon who wants to get married and start a family, but who hasn’t had luck finding a beau who shares her evangelical values. As a remedy, Fielder rents a house for Angela to live in and hires a slew of child actors to act the part of her “son” (named Adam) so she can experience what motherhood would be like. Because of child-labor laws, the actors—whose ages range from several months to 18 years—have to be switched out mid-scene multiple times a day; and to simulate the whole course of childhood, Adam ages several years every few days.

Rather than using jokes to make a larger point, Fielder’s new show derives its humor from making fun of ordinary people.

As often happens with HBO shows, after the first few episodes of “The Rehearsal” aired, conversations cropped up on Twitter. People began asking whether Fielder was manipulating the people on his show, going beyond the proper lines of comedy and interfering with people’s actual lives.

Like other longtime fans of Fielder’s humor, my initial reaction was to dismiss their concerns. Yet as I thought about it more, I began to wonder if there was something to this particular complaint.

Several years ago, I went to a humor conference hosted by Princeton’s satire paper. Centered on the topic of women in comedy, the slate of speakers—which included the editors of Reductress, a female-focused satire site; “Full Frontal with Samantha Bee” writer Halcyon Person; and Patti Harrison, a trans woman who is one of the funniest comedians in the industry—talked about how humorists should approach gender issues in a post-#MeToo world.

Fielder has proven himself capable of using his methods in a positive way before.

The event opened my eyes to the role comedy plays in shaping how society perceives certain people and groups. Comedians of yesteryear regularly joked about rape, used slurs and mimicked accents in their acts. All of this helped to normalize offensive ideas or even encouraged people to take them lightly: It was “just a joke.” Even in our own day, self-proclaimed anti-woke comedians use marginalized groups as the butt of their humor in the name of “challenging” political correctness. (James Acaster, a British comedian, offers a funny rebuttal to this strawman: “Ah, yeah, because you know who’s been long overdue a challenge? The trans community.”)

Now, I’m not accusing Fielder of anything close to that level of foul play. But I do think it’s worth examining whether his schtick in “The Rehearsal” is a constructive use of his platform.

After all, he has proven himself capable of using his methods in a positive way before. On “Nathan For You,” he allows business owners and people trying to make a quick buck to make fools of themselves. (One man refuses to legally change his name in exchange for $1,000, but he agrees to go through the process when Fielder makes a counter-offer of $1,001.) Fielder’s stunts take advantage of his clients’ desperate economic situations, and it’s reasonable if some viewers find that to be in poor taste. But for others, the sense of unease is balanced out by the show’s larger project of exposing capitalism’s weaknesses. Fielder’s tactics are silly, but it’s even sillier that he’s able to pull them off with impunity. Ultimately, desperate business owners’ going along with Fielder’s absurd tactics isn’t nearly so ridiculous as an economic system that seems to incentivize such shocking publicity stunts.

But “The Rehearsal” is missing that edge; rather than using jokes to make a larger point, Fielder’s new show derives its humor from making fun of ordinary people (who don’t have a lot going for them to begin with), seemingly for its own sake. We laugh at how Kor’s go-to bar drink is orange juice, and we feel a sense of knowing superiority when Angela steadfastly claims that Halloween originated as a Satanic celebration instead of a Celtic festival. But what gives us the right to laugh at people’s flaws and idiosyncrasies? For that matter, what gives Fielder the right to leverage them for comedy?

Make no mistake: “The Rehearsal” is very, very funny. But in 2022—a year of record inflation, impending recession and political strife that is inextricable from economic despair—middle America hardly seems the best choice for a punchline.

Doug Girardot is a freelance writer in the New York City area. He was a 2021-22 Josep A. O’Hare Media Fellow at America.