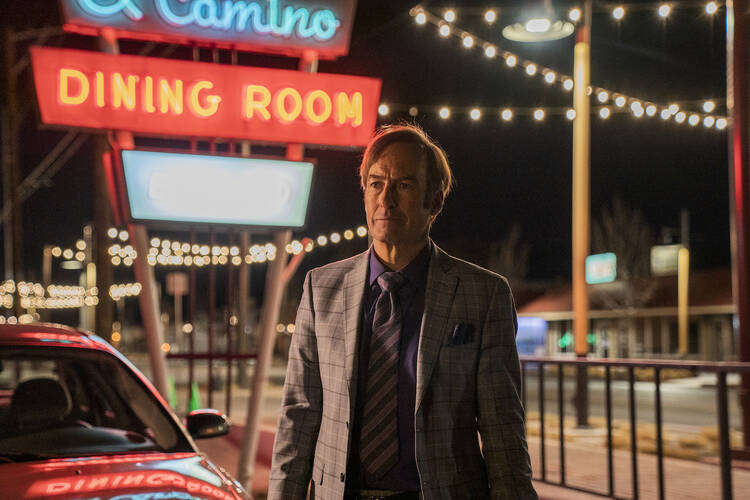 This essay contains spoilers for the final season and final episode of “Better Call Saul.”

Today many Catholics view the sacrament of Reconciliation with skepticism. “Why do I need to share my sins with some priest in a box?” “Who cares what he thinks?” It doesn’t take many bad experiences with priests who think the confessional is their chance to sit in judgment of others to make one uninterested in trying it again.

But as I have watched the brilliant TV series “Better Call Saul” come to its conclusion these last few weeks, I‘ve been surprised by its potent reflections on the liberating power of admitting our crimes and the catastrophic burden that sins unexpressed can have on us.

I‘ve been surprised by its potent reflections on the liberating power of admitting our crimes and the catastrophic burden that sins unexpressed can have on us.

“Better Call Saul,” which began in 2013 as a prequel to the widely acclaimed 2008-13 series “Breaking Bad,” is about Saul Goodman (Bob Odenkirk), the crooked lawyer from “Bad” who aided and abetted hero/villain Walter White in his meth business. Set six years before the events of the parent series, “Saul” follows the lawyer under his real name, Jimmy McGill, as he struggles to overcome his lifelong instincts toward the crooked to become a successful lawyer like his demanding older brother Chuck (Michael McKean).

At the beginning, the story seemed similar to its predecessor. Both starred white men who were desperate to prove themselves and felt emasculated by members of their families. In “Bad,” Walter chafes against the demands he feels his wife Skyler puts upon him. (Walter is in many ways the definition of toxic masculinity, years before people were using that term.) In “Saul,” Jimmy’s brother subtly but constantly grinds away at his self-esteem. And both series appeared to be about those men breaking bad.

But where “Bad” was, in retrospect, about an evil genius who would sometimes hide his villainy from others and himself, the hero of “Saul” was much more relatable, a more or less good man who has his share of demons.

The hero of “Saul” was much more relatable, a more or less good man who has his share of demons.

“Saul” also gave Jimmy a peer and love interest, Kim Wexler (Rhea Seehorn), who had fought her way through law school just like Jimmy and wanted to help people. As much as “Saul” is Odenkirk’s show, it is Seehorn who has been the show’s revelation, an actress able to present layers of thinking and internal conflict to the audience without ever saying a single word. Series co-creators Peter Gould and Vince Gilligan quickly realized the same, and they turned Seehorn into a true co-lead on her own journey and with her own temptations.

Kim became such a riveting and ingenious partner to Jimmy that as the series neared its conclusion, many worried that she was the one likely to “break bad.” The first half of the final season sees the two of them ruthlessly and systematically destroying the reputation of their former colleague Howard Hamlin, pretty much just for the heck of it. Then, when their plans suddenly and violently intersect with the series’ other main storyline (a nail-biting war between drug lords), they are forced to confront the monsters they have become.

Kim became such a riveting and ingenious partner to Jimmy that as the series neared its conclusion, many worried that she was the one likely to “break bad.”

That moment destroys their relationship and effectively ruins their lives. Kim, who has become a capable and generous defense attorney, quits the law and moves away, and Jimmy embraces the garish, amoral Saul persona we know from “Breaking Bad.” (One of my favorite choices in the series is the embrace of the idea that Jimmy did not go through some descent into evil à la Walter White, but instead became Saul as a way of trying to hide the shame and loss of his life.)

In the final episodes we jump ahead to Saul’s post-”Breaking Bad” life, which had previously been glimpsed only in black-and-white sequences at the beginning and end of each season. Having spent two years hiding out as mustachioed Cinnabon manager Gene Takavic, he can take no more, and he begins using two unwitting 20-somethings to steal large sums of money from wealthy single men. Though Jimmy has always had a thing for taking down men and institutions he perceived to be full of themselves, Saul is much harder, motivated by what seems to be nothing but greed and personal grievance. Even his face seems crueler, more severe, more Walter White.

When he is finally arrested, he gives one last bravura performance as a lawyer, showing the federal prosecutors just how he’s going to take apart their case against him, and gets a promise of a reduced plea. But then the unexpected presence of Kim at his plea deal undermines his hubris entirely.

Unlike Walter White, Jimmy McGill has never been able to fully deceive himself. In the end, that is what he and the series’ other main characters, Kim and iconic fixer Mike Ehrmantraut (Jonathan Banks), have in common with each other and with us. They carry the weight of the choices that they have made, and they believe they deserve to be punished. In the penultimate episode, Kim, living her own version of a shell of a life in Florida with a boyfriend who has no idea how brilliant she is, returns to Albuquerque to admit how she and Jimmy ruined Howard’s life. From the stand Jimmy ends up doing much the same, taking responsibility for not only everything that he’s done but everything Walter White did.

In both their cases there is great cost to their honesty: Jimmy will go to jail seemingly for the rest of his life, and Kim may face a civil suit from Hamlin’s wife that will have her wages garnished for the rest of hers. But in the end it doesn’t matter. In admitting what they had done, the two of them are set free.

Before the end of the finale, they stand in a room together sharing a cigarette, just as they did in a parking garage in the pilot and often thereafter. But this is the first time in the whole series that there is no fear as they do so, no unspoken words or looming threat that may destroy them. They have faced the worst that the world has to offer them. Far more upsetting, they have faced the worst that they have to offer the world. And though much of who they are has been burned away, what is left can, for the first time, truly live.

For six years, “Better Call Saul” has given the story equivalent of a graduate-level seminar on morality—the temptations we all face, the slippery slopes we slide and the costs we endure. But in its end it also shared a ray of hope—that with courage there is a future beyond all that, and friends who wait for us there.

Read more from America:
-Catholics: We need to talk about our bad experiences in Confession
-Review: Broken, Bad, Redeemed?