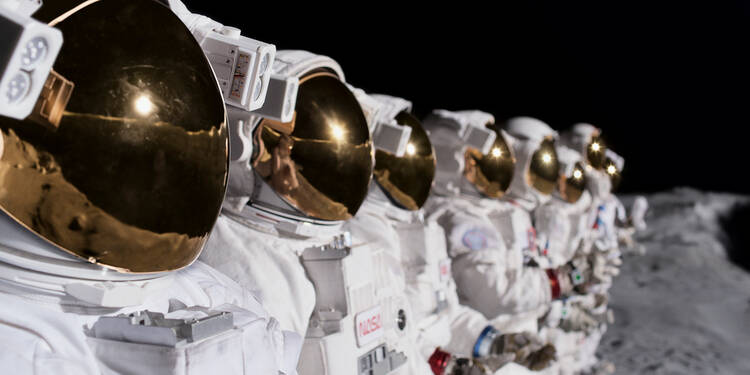 What if, in the summer of 1969, the Soviet Union got to the moon first? What if, instead of fizzling out in 1972 after Apollo 17, the space race continued well into the 21st century? And what if white American men weren’t the only human beings to step foot on the moon, but instead NASA had women and minority astronauts a decade before Sally Ride?

This is the premise of the series “For All Mankind” on Apple TV Plus. A compelling drama with multiple storylines and diverse characters, “For All Mankind” is a cross between the best Cold War thrillers and “Apollo 13.” It’s riveting television, a slow burn that still manages to be fast-paced, immersing us into an alternate timeline with details that will delight any space enthusiast or history geek. (The downstream effects of losing the moon race on Watergate, the Equal Rights Amendment and the Panama Canal Treaty are something to behold!) The alternate timeline is so vivid you’ll start to mix it up with real space history. By the end, you may find yourself wishing it was real.

“For All Mankind” invents a Soviet victory in the space race and imagines a tempting counterfactual: What if Americans’ faith in government was never shattered?

The moon landing by Apollo 11 in July 1969 was the culminating moment of the era of Big Government, when Americans believed in and invested in the public sector. This was the era defined by the Roosevelt realignment: From 1932 on, most Americans tended to believe and wanted to invest in the state’s capacity to solve problems, from the Great Depression to segregation, and to build things from the Interstate Highway System to the Saturn V rocket. It’s no coincidence that the most significant investment in the moon race came under President Lyndon B. Johnson, who was first elected to Congress as a Roosevelt Democrat in the midst of the New Deal. While President Kennedy may have spoken of the moon race as climbing Everest, Johnson saw it as a Great Society jobs program, with space exploration serving to build an educational and industrial base for a multiracial social democracy in the American South.

When the Apollo program came to an end, it was followed by increasing white backlash to racial integration, Watergate, the energy crisis and defeat in Vietnam. This is not to say that continuing the moon missions would have saved America from a turn to the right; after all, Richard Nixon was elected just over six months before Neil Armstrong, Buzz Aldrin and Michael Collins took off. But it’s striking that Americans seemed to lose their faith in their government after their government stopped sending people to the moon.

And so the end of America’s golden age of spacefaring coincides with the dismantling of state capacity in the 1970s and ’80s, the decades in which the steady expansion of government that began under Roosevelt slowed, then stopped and finally began to be reversed under Reagan. “For All Mankind” invents a Soviet victory in the moon race and imagines a very tempting counterfactual: What if the era of Big Government never really ended? What if Americans’ faith in government, and in each other, was never shattered?

Of course, the era of Apollo wasn’t all kumbaya, and the alternate timeline here is similarly not utopian. In Season 2 of the series, a military confrontation on the moon takes humanity closer to a full-fledged nuclear exchange between the Soviet Union and the United States than we ever got in the real Cold War. Exploring the uncomfortable relationship between the military-industrial complex and space exploration is one of the strongest elements of “For All Mankind.” Wehrner von Braun and the Nazi thread in NASA history features prominently in Season 1, as does the impact of Cold War paranoia on an undocumented Mexican family and on closeted L.G.B.T. employees hoping to maintain NASA careers.

“For All Mankind” is able to raise difficult moral questions without losing faith in the basic nobility of human spacefaring.

Yet “For All Mankind” is able to raise difficult moral questions about the militarization of space without losing faith in the basic nobility of human spacefaring. The show’s vision of a space race without end is very attractive when contrasted to our own much more disappointing reality, where Jeff Bezos’ trip to low earth orbit in 2022 (replicating what Yuri Gagarin accomplished in 1961!) is supposed to excite us. In contrast, Season 3 has humanity on Mars by 1995. Tantalizingly, the new season trailer hints that this race for Mars will be a three-sided affair, between the United States, the (presumably still-kicking) U.S.S.R. and a private corporate effort led by a very Elon Musk-like figure. It’s a real question in space exploration today: Will the first symbol raised on Mars by human hands be an American flag—or a corporate logo? Will the next chapter of American space exploration represent a renewal of faith in government, or just the latest sad example of declining state capacity leading to privatization?

In “For All Mankind”’s opening episode, the show cuts between Apollo 11 making its way to the moon and a group of Mexican immigrants crossing the border into the United States. The argument is made with powerful imagery: Americans are at our best when confronting frontiers and overcoming barriers, be they the U.S.-Mexico border, prejudice or gravity itself. Many glass ceilings are shattered and color lines crossed in the show’s alternate timeline, all of it pointing to a fantastical but plausible society where the backlashes to gender and racial equality are not quite as decisive. That’s what “For All Mankind” is really about: about Americans being our best selves, about believing in the public sector’s capacity to do big things, about our capacity to stand diverse and united in the face of a common challenge. There are moments when the show even suggests the American astronauts can find unity with the Soviet cosmonauts in the face of the immense dangers of space and the even greater dangers of war.

As billionaires turn space from a challenge for “the best of all mankind” into a private playground, this is a television show that inspires nostalgia for a world that never was. Ultimately, it is a tribute to an era where we believed that our government could do great things. We believed in the public sector. We believed in each other. We could electrify the Tennessee Valley, defeat Hitler, expand civil and voting rights to all Americans, and put a man on the moon, all in the span of three decades. “For All Mankind” is worth watching simply as a reminder of who we are supposed to be: pioneers, striving across borders and across the stars.

Antonio De Loera-Brust is a former O’Hare fellow at America Media who has written about politics, sports and film. He is a native Californian and a graduate of Loyola Marymount University in Los Angeles.