Review: The ‘Downton Abbey’ characters already got happy endings. So why do they need a new film? 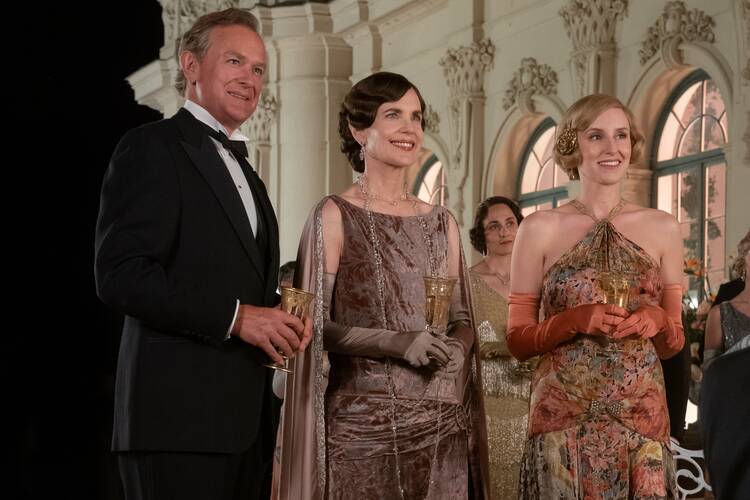 For the last 10 years of my grandmother’s life, whenever I would come over to visit she would be sitting in her little TV room, CNN on full blast and her big dog lying on the couch next to her. “How are you doing, Grandma?” I would ask.

And she would look at me and say with some disappointment, “Well, I’m still here.”

There are many moments in the new film “Downton Abbey: A New Era” where it appears as though the characters feel much the same. “Downton Abbey” has always been a fairy tale about a group of people trapped in a world made of rules and customs who slowly fight their way to joy. But after 52 episodes and one previous film, almost everyone has found their happily ever after. So why are they still here?

After 52 episodes and one previous film, almost everyone in 'Downton Abbey’ has found their happily ever after. So why are they still here?

Mostly, it seems, to serve as midwives, therapists and fairy godparents to a whole other set of characters. There’s the gorgeous silent film star whose lower-class British accent threatens to ruin her career with the rise of the talkies. There’s the elderly grieving French woman whose dead husband has inexplicably bestowed her beloved villa upon Lady Grantham. What unfolds is less costume drama and more “Touched by an Angel,” just with stiff upper lips and so many boiled vegetables.

To quote another Maggie Smith film, “For those who like that sort of thing, that is the sort of thing they like.” There are a few moments when the show and characters we love are able to shine through the clouds. When the ever-awkward Molesley suggests a new ending for the Hollywood feature that is being shot at Downton, his take on what the scene could be grows almost incandescent with passion and imagination. For as bad as this film is (and it is very bad; it is “Sex and the City 2” bad), it is just about worth going to just to watch actor Kevin Doyle deliver this one shining monologue. You can even see the awe on the other actors’ faces, as though they are watching a rocket reach escape velocity while they themselves remain trapped under the weight of this stodgy bread pudding of a film.

To quote another Maggie Smith film, “For those who like that sort of thing, that is the sort of thing they like.”

And here’s the puzzling thing: the period in which the film takes place is 1928-29, right before everyone is about to go through the worst financial crash the world had ever known. Imagine the story this film could have told, the struggle and humanity to be mined from a hardship that is shared by everyone at Downton. Imagine how relevant and meaningful this film could have been to the “new era” we find ourselves in.

The danger with returning to characters who have struggled to find their way and earned their success is that if you don’t have a new story worthy of them, you risk undermining all that they have achieved. For nine years the true protagonist of “Downton Abbey” had been Lady Mary, the talented and modern young woman who senses a much better and more interesting future out there, yet finds herself trapped in the hellish quicksand of her own time. Over six seasons and a movie she went from marriage chattel to not only a truly independent woman but head of the family.

There are a few moments when the show and characters we love are able to shine through the clouds.

And where is she in the “new era?” Alone and anxious again, her restless car-racing husband busy doing whatever it is he does around the world, while she sits at home wondering whether he actually does care about her. At one point she tells someone she ranks at best third on her husband’s list of loves. “You expected to be higher?” her friend says, surprised. And she shrugs as though to say, You’re right, of course. It’s as if she never escaped this world and its rules after all. Like the adults in so many English children’s stories, her ability to see or remember an existence filled with magic and possibility has faded entirely. It won’t be long before she is complaining about workers’ salaries and calling for the likes of Margaret Thatcher. It took everything in me not to throw my tub of over-buttered popcorn at the screen.

I saw “Downton” after spending the morning at my niece’s college graduation. For over two hours we sat and waited as the university read through the graduating class’s 1,942 names. By the end I wondered if hell might not be just an endless commencement, in which they never call your name and let you leave. (There has to be a better way to do that ceremony; maybe they should have a D.J. spinning discs while the students come up and turn the whole thing into a dance party.)

After watching “Downton” I had a similar thought: What if the “new era” that creator Julian Fellowes trumpets is not in fact some new period of time that the characters have entered, but a new metaphysical state? What if our characters are actually all dead and trying to find their way out of purgatory? Maybe the awe we see on Lady Mary’s face as Molesley gives his astonishing incantation is the wonder of rediscovering there is something waiting for her beyond this endless repetition of formal wear, bad men and hollow repartee.

Like doves that were captured and domesticated long ago, these characters we grew to love and admire stand around in “A New Era” with little desire or aspiration, ever more asleep to what they have lost. There are windows all around them. If only they could remember what it felt like to fly away.