‘Father Stu’ is about redemption. But can the movie redeem itself? 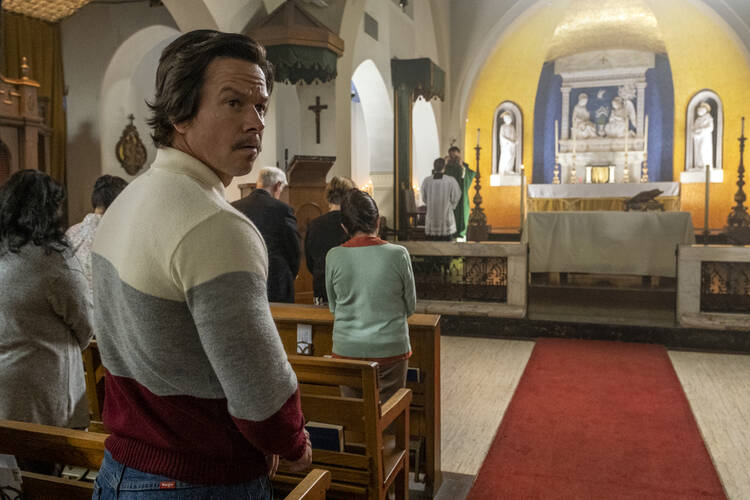 “Father Stu” is like a work of conceptual art—it represents an idea. You don’t always need to see it to get the gist. And sometimes it’s just as well you don’t.

The biographical film, “based on a true story” (a phrase intended to provide wiggle room) stars Mark Wahlberg as Stuart Long, an amateur boxer turned Catholic priest who at the beginning of his clerical career was stricken with a disabling and ultimately fatal neurological disease. The movie’s message is redemption, of course, something implicit in the casting of the film: Mark Wahlberg has had his share of public problems. In addition, Mel Gibson, who carries more baggage than Delta Airlines, plays Stu’s father, Bill, whom one is tempted to describe as irredeemable—except of course, that would imply the message of the movie wasn’t getting across.

“Father Stu” is intended to be inspirational, but viewers may find any sense of elevation elusive.

Written and directed by Gibson’s partner (and mother of his child), Rosalind Ross, “Father Stu” is intended to be inspirational, but viewers may find any sense of elevation elusive. Stu pursues his fighting “career,” such as it is, far beyond a reasonable age or state of health (early on, a doctor advises him to quit and receives a torrent of vulgarity in return). He’s a dogged kind of guy who will approach his religious calling—he receives a visit from the Blessed Virgin after a near-fatal motorcycle accident—with the same unreasonable expectations he brought to boxing. Malcolm McDowell, who plays the seminary rector, Monsignor Kelly, who receives Stu’s application for enrollment, is certainly a sympathetic character, sympathetically portrayed: Stu is probably the most improbable candidate Kelly has ever considered, never mind the most abrasive. But the spirit of “Father Stu” is “never give up.” Stu doesn’t; Kelly does.

Long was a priest for only four years before succumbing at age 50 to his degenerative muscle disease (inclusion body myositis), so “Father Stu” by necessity spends the first of its two hours on Stu’s pre-vocational life, an aimless journey that involves small-time criminality, drunkenness, a mutually abusive relationship with his father and, after boxing, a journey west where he hopes to get into acting. The portrayal of Hollywood is calculated to feed conventional biases: The first casting agent Stu meets, a man, makes a sexual overture to him and is, of course, assaulted for his trouble.

Stu approaches his religious calling with the same unreasonable expectations he brought to boxing.

“You don’t belong with those people,” advises his mom, Kathleen (Jacki Weaver, burdened with dialogue only a scriptwriter’s mother could love). Stu doesn’t listen. Stu never listens. (Except to Mary.) What audiences will be wondering about is Stu’s self-regard: Does he really think he is charming? As portrayed by Wahlberg, he is the opposite—vulgar, obnoxious, too old for juvenile delinquency and burdened with a myopia about social signaling and appropriate behavior that seems intended to be heroic yet is anything but. It is a particularly cringeworthy experience watching Stu’s courtship, as it were, of Carmen (Teresa Ruiz), the beautiful young member of a local church who is clearly too devout for Stu. (“As Catholic as the cross,” someone says of her.) As part of his campaign to woo Carmen, Stu offers to be baptized. “Imperfect contrition” would describe his first confession, though that would also be putting it mildly.

Carmen is eventually won over, which may mystify viewers. So may Stu’s decision to join the priesthood (and leave Carmen behind) after surviving his bike crash and receiving visits from Jesus in a bar and Mary on the roadside. “She don’t give a good goddamn about a real mother’s son,” Kathleen wails, as if she would have preferred Stu to perish. His father’s response is equally supportive: Stu’s attempt to join priesthood “is like Hitler trying to join the ADL.” It would be funny, if you weren’t immediately struck by the notion that Bill would have no idea what the ADL is. And that Mel Gibson undoubtedly does.