In a time of international mourning, ‘Drive My Car’ is a relatable portrait of grief 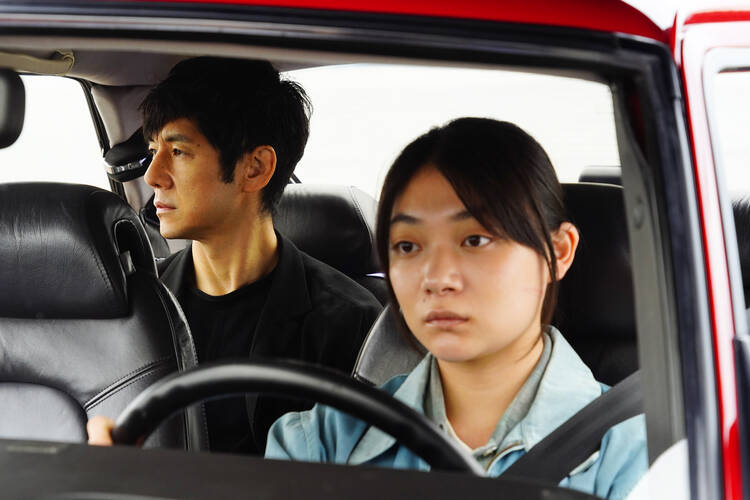 Standing amid the snow-buried wreckage of her childhood home in Hokkaido, the wintry northern tip of the Japanese archipelago, the laconic chauffeur Misaki Watari remembers her past. It was in this stark, achromatic landscape—save for the glaring red Saab 900 parked in the background—that a fatal mudslide consumed her home and drowned her mother several years prior. Watching in silence from behind the young driver, her widowed passenger and reluctant travel companion Yusuke Kafuku reflects on what Misaki told him: She could have freed her mother from the debris, but did not.

A cerebral, contemplative portrait of grief and its discontents, “Drive My Car” is an exceptional three-hour elegy whose quiet intensity intimates an emotional storm beneath the surface. (The French auteur Robert Bresson notes that art is born out of suggestion.) Borrowing from theatrical conventions like extended monologues and dialogue-heavy scenes, Oscar-nominated director and art house darling Ryusuke Hamaguchi pulls off a kind of cinematic show and tell without reducing his picture to a filmed stage play.

“Drive My Car” is a three-hour elegy whose quiet intensity intimates an emotional storm beneath the surface.

But the theater and the creative process of storytelling are front and center from the opening minutes of “Drive My Car,” when we are are introduced to theater director Yusuke (a melancholy, sensitive Hidetoshi Nishijima) and his ill-fated wife, a screenwriter named Oto, crafting elaborate tales in the moments after sex. They attend a production of Samuel Beckett’s “Waiting for Godot” while Yusuke stars in a performance of Anton Chekhov’s “Uncle Vanya.” The relationship between physical intimacy and storytelling is complicated when Yusuke discovers his wife, who dies from a brain hemorrhage near the start of the film, engaging in a sexual affair with a younger actor, the volatile and unpredictable Koji. (Yusuke, in turn, later casts Koji in a new production of “Uncle Vanya.”)

Hired as a theater director in Hiroshima, a shimmering metropolis far removed from its postwar devastation, Yusuke is prohibited by the stage company from driving himself and is instead assigned a professional chauffeur (a stoic yet engrossing Toko Miura). Their relationship begins on a tense note as Yusuke refuses to let anyone else, ahem, drive his car. But it is the ever-blossoming friendship and development of familial trust between Yusuke and his driver—people isolated, grieving and bound together by their professional duties—that forms the emotional juggernaut at the heart of the film.

“Drive My Car” continues a kind of American renaissance for Asian cinema.

While “Drive My Car” drags at points as it buckles under the weight of its own run time (why is every movie three hours now?) the picture proceeds at its own steady pace without leaving its viewers behind. The film is made all the more poignant and absorbing as it relates to the current nightmarish period of international mourning: Across the globe, more than six million people have succumbed to Covid-19 and left untold millions in a state of bereavement, anger and disbelief. Intentionally or not, Hamaguchi succeeds in relating the struggles of his characters—one longing for his lost wife and the other dreaming of a childhood she never had—to our present moment.

The rousing critical success of “Drive My Car,” thrice-honored at the Cannes Film Festival and nominated for four Academy Awards, appears to continue a kind of American renaissance for Asian cinema. In 2019, Bong Joon Ho’s thriller, “Parasite,” became the first South Korean film awarded the Palme d’Or and later the first foreign-language film to earn the Academy Award for Best Picture. The most recent Best Picture winner, “Nomadland,” was directed by the Beijing-born Chloé Zhao. “Drive My Car” is now one of only 13 foreign-language films, including last year’s “Minari,” to be nominated for the Academy’s top competitive honor.

The 94th Academy Awards will air live on ABC on Sunday, March 27.

Ryan Di Corpo, a former O’Hare Fellow at America Media, is a freelance journalist and graduate student at Northeastern University.