‘Summer of Soul’ and the power of memory in Jesuit spirituality 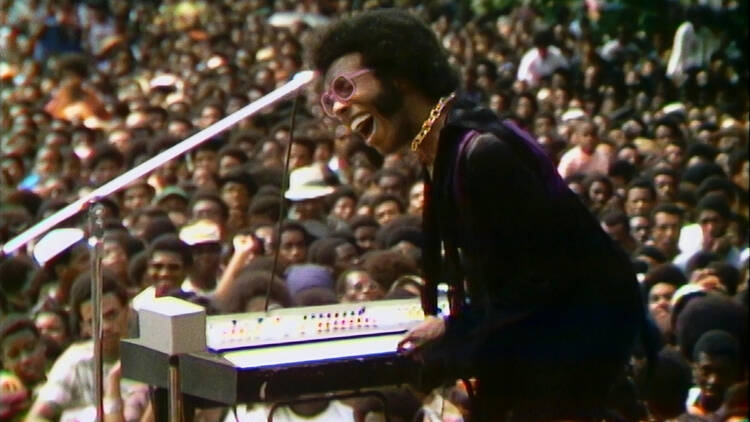 Sly Stone at the Harlem Cultural Festival in the summer of 1969. Photo courtesy of Distraction Media.

Watching “Summer of Soul,”the award-winning documentary by the filmmaker Ahmir “Questlove” Thompson, I was struck in a new way by memory’s capacity to deepen my awareness of God’s presence in my life. Memory is a vital part of the Spiritual Exercises of St. Ignatius Loyola, and served as a sharply-focused lens to watch a film about the beauty and historic struggles of Black culture.

“Summer of Soul,” which was recently nominated for the Oscar for Best Documentary, centers on the Harlem Cultural Festival in the summer of 1969, a decade before I was born. As I watched and rewatched the film,I rejoiced in the sea of happy Black faces watching the live music concerts. Keeping time with this great crowd of people—children, the elderly, young adults, middle-aged folks and even a man up in a tree—my body moved to the music of Stevie Wonder, Nina Simone, the 5th Dimension and Gladys Knight.

When Mahalia Jackson sang “Precious Lord, Take My Hand” tears rolled down my cheeks. A young Jesse Jackson told the crowd that this was Martin Luther King Jr.’s favorite song and that King’s last words were to the bandleader Ben Branch (also present at the festival in 1969), requesting that he play this hymn. I felt the deep and living roots that connect me to the past, to my community, to the foundation of who we are as Black people.

Memory served as a sharply-focused lens to watch a film about the beauty and historic struggles of Black culture.

Our past (like our present) is filled with pain and injustice, but “Summer of Soul”affirms that God has blessed us richly. We are strong, we are beautiful, we are gifted and we possess a bounty of love and joy. The memory of those summer days in 1969, preserved on film, is a path both to healing in the present and to the potent possibility of the future.

The historian William Sturkey has pointed out that all too often, Black history has been erased. This means that as a people, we have not been allowed to claim as our own the spiritual and psychological power of memory. “Active racism, exclusion, and environmental injustice,”said Sturkey, “have systematically destroyed or buried whole sections of Black history.”

That the film footage of the Harlem Cultural Festival lay dusty and nearly forgotten in someone’s basement for more than 50 years, as Questlove said in an article in The New York Times, is an illustration of this sad reality. When the world around us denies us our memories, we often doubt ourselves; we lose the God-given strength and inspiration that memory can offer.

When the footage was found and transformed into an acclaimed movie, however, that was a demonstration of both the hardiness of the Black spirit and the stubbornness of God’s grace—a grace that continually brings new life out of places that once seemed barren and hopeless. As Musa Jackson, who attended the festival as a child, commented in an interview in the film, hearing the music and voices from 1969 proved, “I’m not crazy!” It really happened. Mr. Jackson’s memory was affirmed and amplified. Today I share his wonder and joy.

When I watched the movie a second time, the thought occurred to me that this documentary is an invitation to a spiritual process structured much like the Spiritual Exercises. The First Week of the Exercises includes a three-part question: What have I done for Christ? What am I doing for Christ? What ought I do for Christ? These questions invite us into the past, just as the “Summer of Soul”does. Ignatius goes on to challenge us to re-examine the present in a way that opens us to the working of God’s grace in the future. He believed that the past is part of the present and the present will be part of the future. Since the past shapes both the present and the future, memory illuminates the path ahead.

In the Exercises we see the wounds, the regrets and the brokenness of our past, and we offer them all to Jesus for healing.

Ignatius guides us to look back at the sins of the past in the light of God’s love. We see the wounds, the regrets and the brokenness, and we offer them all to Jesus for healing. In a similar way, “Summer of Soul”interweaves the painful history of racism in the 1960s with the joyful beat of the era’s music. The film reminds us that the Apollo 11 moon-landing, an event that was televised all around the world, also took place in the summer of 1969. That epic moment raised the question of why America was able to marshall the willpower and resources to go to the moon, while leaving largely unaddressed entrenched poverty and racism on earth.

Reliving the past, we sorrow over the injustice, even as we experience a powerful affirmation of love, a love that calls us to work for renewed justice and healing. In the Second Week of the Exercises, Ignatius leads us into a deeper connection with the life of Jesus, inviting us “to ask for an interior knowledge of our Lord...that I may love him more intensely and follow him more closely.” (Or, as it is sometimes more popularly put, “to see him more clearly, love him more dearly, and follow him more nearly.”) As I listened to the Staple Singers belting out “Help Me Jesus” (“I need your power/ help me run this race”), I found myself dancing to the rhythm of faith in Christ.

As the Rev. Al Sharpton commented on screen, Gospel music “was the therapy for the stress and pressure of being Black in America.” The journalist Charlayne Hunter Gault added that “the church provided sustenance” as it helped “generations of people confront the most vicious, violent acts.” In Jesus’ life the Black community has always found a mirror of their own lives.

In Jesus’ life the Black community has always found a mirror of their own lives.

In the Third Week of the Spiritual Exercises, we follow Jesus to his death on the cross. As “Summer of Soul”evoked the memories of the martyrs of the civil rights movement, including Martin Luther King, Jr., Malcolm X and Bobby Kennedy, I perceived the image of Jesus in their lives and deaths. Even as I mourned that we have lost these icons of faith and justice, I experienced the Gospel hope that life rises out of death. I sang along with the Edwin Hawkins Singers in their joyful rendition of “Oh Happy Day” (“when Jesus washed my sins away”). Their voices reminded me that death is never the end. Hope never dies. Out of a hideous act of human violence—the crucifixion—new possibilities continue to arise.

In the Exercises’ Fourth Week, we celebrate the Resurrection. I couldn’t help but laugh as Sly and the Family Stone sang “I Want to Take You Higher.” Sly Stone may have been making a reference to drugs or sex, but for me, the song was a message from God. It was one I continue to hear even now: “Don’t give up,” God says to me. “Don’t wallow in discouragement and despair. I need your help building a better world. I want to take you higher.”

“Don’t give up,” God says to me. “I need your help building a better world."

Finally, in “The Contemplation to Attain Love,” which comes at the end of the Spiritual Exercises, Ignatius invites us to see our lives—past, present and future—through the lens of the Resurrection. God’s love and grace are everywhere, and we are called to share them with the world. “Bringing people together,” said one of the interviewees on “Summer of Soul,”“that’s what it’s all about.” Another interviewee expressed the power of love to work actively through relationships and community: “We need to feel like family…fighting for each other, lifting each other up.”

As I was writing this article, I heard the news of Amir Locke’s death in Minnesota. Another young Black man has lost his life in an encounter with the police. It fills me with anger, grief and fear. But then there are Stevie Wonder’s words from the Festival stage in “Summer of Soul”: "I refuse to let fear kill my dreams."

The memories documented by the film are more than just lost history; they are spiritual sustenance. They empower me to sing with Mahalia Jackson: “Take my hand, precious Lord, lead me on.” 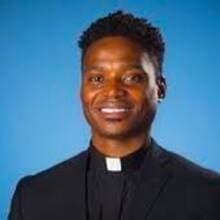 Patrick Saint-Jean, S.J. is an Assistant Professor of Psychology at Creighton University. He is the author of The Spiritual Work of Racial Justice: A Month of Meditations with Ignatius of Loyola (Anamchara 2021,) and The Crucible of Racism: Ignatian Spirituality and the Power of Hope (Orbis Books, March 2022).

@PatrickSaintJe4
Show Comments ()
Join the conversation: Login or create an account
Before you can comment, you need to update your profile to include your first and last name, as required in our comments policy. Then reload this page and you'll be set up for commenting. Update your profile