Olympic figure skating always brings the drama. This year is no different. 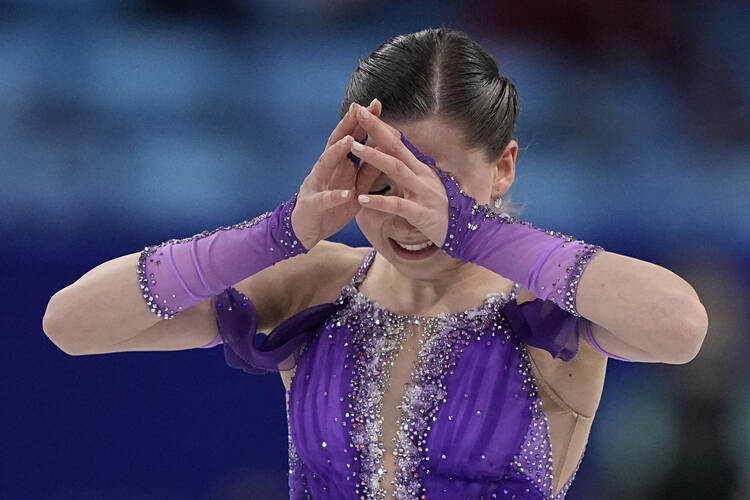 Kamila Valieva, of the Russian Olympic Committee, reacts in the women's short program during the figure skating at the 2022 Winter Olympics, Feb. 15,, in Beijing. (AP Photo/David J. Phillip)

One February morning in 1988, as usual, I awoke an hour before everyone else in my family and began my usual ritual. This included putting on school clothes, invariably jeans and a sweatshirt (I went to a public junior high school). This may or may not have also included brushing my teeth (I was a 13-year-old boy). This ritual always culminated with laying down in front of the television set in our family room to watch reruns of “The Beverly Hillbillies” until my mother called me in to eat my breakfast before heading off to school.

I’m not sure exactly when I noticed the itching. But I do recall it was subtle at first (the itching, not the “Hillbillies” humor). But the itching began to spread, and it soon became unbearable. I went into the kitchen to tell my mother. She looked at me and gasped: I had broken out in hives all over my body. Over the course of the next few days, I saw the doctor several times. It was decided that the massive case of hives was an allergic reaction...to what? Nobody knew, and 24 years later, nobody still knows. I’ve never had a reaction like it since. However, for two weeks in February of 1988 my entire body was covered in hives—itchy, scratchy hives.

As the Beijing games draw to their conclusion, my only hope is that there is room for more than just Kamila Valieva’s story in the public imagination.

As it happened, the hives coincided with the annual eighth-grade ski trip, which I missed, as well as the Winter Olympic Games in Calgary, of which, because I could do nothing else but itch and scratch, I witnessed every single televised moment.

1988 was the Olympics of Bonnie Blair, who won her first of a career five gold medals in Calgary. It was also the Olympics of heartbreak for Blair’s fellow speedskater, Dan Jansen, whose sister passed away before he was to race, whereupon he subsequently fell coming around a turn. It was the Olympics of Alberto Tomba, the Italian playboy skier who raised as many eyebrows with his off-hill antics as he did with those on it.

As a budding figure skater, I was entranced by “The Battle of the Carmens,” which featured African-American star and Stanford pre-med student Debi Thomas going up against defending Olympic champion and East German “glamour girl” Katarina Witt, both skating their programs as the titular heroine of Bizet’s opera. It was also the Olympics of the “Battle of the Brians”— Orser and Boitano, respectively—competing for the gold in men’s figure skating. And then there was the pairs figure skating event with little Ekaterina Gordeeva and her towering partner Sergei Grinkov, an image of perfection in both skill and appearance.

Since the time Sonja Henie won her third Olympic gold medal, became one of the biggest stars in Hollywood, and got engaged to Liberace, figure skating has never disappointed the television powers that be.

If it seems like I remember a lot about 1988 in Calgary, it’s because I do. The images, the athletes and, most especially, the stories stayed in my brain because of the way the Olympics were and continue to be mediated to its audience.

Every sport, be it football, basketball or darts, has some level of narrative involved in its media representation. But the Olympics, due in no small part to their infrequency, are more reliant than most on narrative to reach and sustain its television audience. And for an American audience, that’s what the Olympics are all about: the stories. The results are important only insofar as they complete a particular narrative.

I will admit that 35 years ago I cried when Debi Thomas made multiple errors in her long program and wound up with the bronze medal, because that was not how the story was supposed to end. The first African-American woman to compete in figure skating at the Olympics—who also happened to be pre-med at Stanford—was supposed to defeat the East German. Dan Jansen wasn’t supposed to fall after he found out his sister passed away; he was supposed to come back and win...for her...us...himself?

Beijing has provided some wonderful stories, not the least of which is Nathan Chen, who came back to his mother’s hometown and won the men’s figure skating gold.

Last week, when the news broke that Russian figure skater Kamila Valieva had tested positive for the heart drug trimetazidine at the Russian National Championships in December, a friend of mine texted me saying, “Boy, you figure skaters always bring the drama to the Olympics, don’t you?” And it’s true. Since the time Sonja Henie won her third Olympic gold medal, became one of the biggest stars in Hollywood, and got engaged to Liberace (yes, Liberace!), figure skating has never disappointed the television powers that be when it comes to bringing the narrative to the Olympic Games. Indeed, it would seem that figure skating and its intrinsically showbiz (or at least showbiz adjacent) component lend themselves to the kind of narratives that Olympic telecasts revel in.

As a former figure skater, I would never argue that it is not a real sport, but rather that it is a subjectively evaluated sport, which at times, calls into question its results. Figure skating has tried in the last two decades to make itself more of an objective sport; it has created a code of points which assigns a particular value to each jump and spin contingent on its difficulty. Still, there remains the infamous “second mark,” as it were, which now goes under the title of Program Component Scores (PCS) and which evaluates more subjective aspects, such as the interpretation and performance of a program. And this is where the problem frequently lies: Sometimes one judge’s, or multiple judges’, understanding of what is “good” interpretation can be problematic, and from this place of “interpretation” (and possibly corruption) has come many a controversy.

Ironically, the Valieva story, which has become the story of the Beijing Olympics, is not about judging corruption or one skater hiring someone else to whack another skater. Instead, it deals directly with athletic performance, as in athletic performance-enhancing drugs. I don’t think that’s a victory; it’s just a new avenue for controversy.

As the Beijing games draw to their conclusion, my only hope is that there is room for more than just Valieva’s story in the public imagination. I didn’t break out in hives this Olympics, so I haven’t watched as much as I have in the past. Still, Beijing has provided some wonderful stories, not the least of which is Nathan Chen, who, after a disappointing performance in the short program four years ago, came back to his mother’s hometown and won the men’s figure skating gold, all the while attending Yale. Chen, along with athletes like snowboarder Chloe Kim—who won her second gold medal in the half-pipe, the first woman to do so—are a reminder of the many wonderful stories the Olympic Games have to offer.

Jake Martin, S.J., is an assistant professor of film studies and performing arts at Creighton University. His book What’s So Funny About Faith: A Memoir from the Intersection of the Hilarious and Holy was published by Loyola Press in 2012.