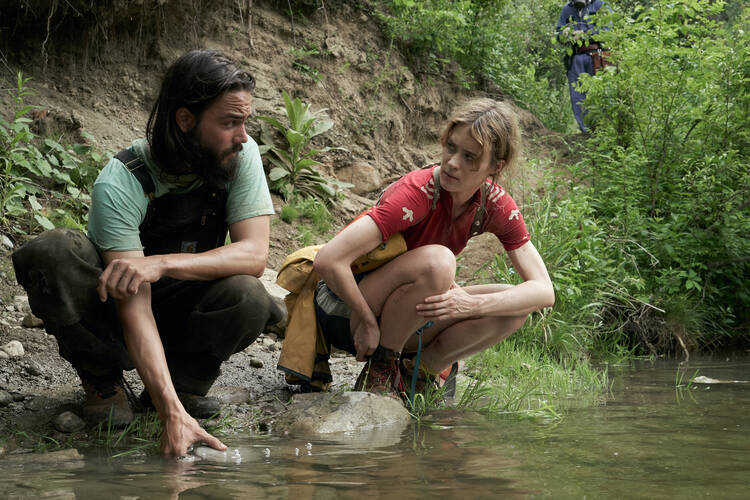 Even after nearly two years, the global pandemic we’re in the midst of hasn’t yet inspired a major work of drama or entertainment. Perhaps we shouldn’t expect it to. After all, the plagues of Shakespeare’s time and the flu pandemic of 1918, while they exerted sobering influence on the art of their respective ages, were seldom if ever explicitly depicted in narrative fictions at the time.

The journey of most of the characters in “Station Eleven” is from self-protective emotional withdrawal to vulnerability and connection.

This is understandable, of course. Have audiences ever really craved contemporaneous entertainment about the everyday tribulations they are facing? On the other hand, the appetite for apocalyptic fables about a world gone violently wrong has always been strong, from “Oedipus Rex” to “The Walking Dead.” This is true even when a plague is not upon us: Emily St. John Mandel’s novel “Station Eleven,” a speculative fiction about a deadly flu that suddenly wipes out 99 percent of the world’s population, was a bestseller in 2014. Many more readers discovered it during the lockdowns of Covid-19, finding in Mandel’s book an eerie what-if portrait of a world much further gone than ours, yet still hearteningly resilient.

Still more found it thanks to the exquisitely made HBO Max series that ran from December 2021 to early January of this year. The popularity of both the novel and the series isn’t hard to explain: Neither dwells in grisly detail on the pandemic or its symptoms, instead focusing on the desperate straits of its haunted survivors in a world without electricity, the internet, air travel, even fuel (gas reserves have gone stale). Both imagine a world of makeshift settlements amid the abandoned detritus of airports, apartment buildings and retail stores. Most crucially, the story revolves around an itinerant troupe of actors and musicians called the Traveling Symphony, who we find, 20 years after the flu’s onset, wheeling a caravan around Lake Michigan, performing Shakespeare and giving orchestral concerts for small settlements. On one level, “Station Eleven” offers a soothing meditation on the transcendent persistence of the Western cultural canon; it’s “Left Behind” for NPR listeners.

“Station Eleven” offers a soothing meditation on the persistence of the Western cultural canon; it’s “Left Behind” for NPR listeners.

That is too dismissive, of course. There are other levels in “Station Eleven,” which toggles between a pre-flu world very much like our own and the perils of an imagined future. It is seen through the eyes of a handful of interconnected characters, all linked by a central figure, a shallowly charismatic movie star named Arthur Leander. Like an augury of impending tragedy, on the eve of the flu’s arrival, Arthur dies of a heart attack during a performance of “King Lear.” An audience member named Jeevan, a wannabe paramedic, leaps onstage to help him, to no avail. Also in the “Lear” cast is an 8-year-old, Kirsten Raymonde, whom Arthur had given a comic book called “Station Eleven,” made by his ex-wife Miranda, that will become a talisman for Kirsten in the post-flu years. Circling Arthur’s periphery are another ex-wife, Elizabeth, with whom he has a troubled son, Tyler, and an old friend, Clark, a Brit who has forsaken a punkish youth for corporate consulting.

That is most of the central cast of both the book and series. But Patrick Somerville’s TV adaptation has taken extraordinary and salutary liberties with Mandel’s original. Most importantly, he has linked Jeevan and Kirsten, who barely meet in the book, as an essential duo. For a time they form a hardy trio with Jeevan’s brother, Frank, with whom they weather the flu’s initial devastation with a stockpile of supplies in a high-rise apartment in Chicago. It is Frank who utters what may be the series’ signature line; referring to the months of shivering subsistence and game-playing camaraderie with Kirsten and Jeevan, he says, “This strange and awful time was the happiest of my life.” For anyone who has spent the past two years of isolation in prolonged proximity to a small group of loved ones, this statement has a ring of bittersweet truth.

The appetite for apocalyptic fables about a world gone violently wrong has always been strong.

The trajectory of the Jeevan-Kirsten bond gives the series a satisfying long arc, as the grown-up Kirsten (played with a compelling mournfulness by Mackenzie Davis) strives to build a family of choice with her fellow performers but is clearly missing a Jeevan-shaped piece of herself. She moves in unlikely tandem with another soul wounded by abandonment: Tyler, Arthur and Elizabeth’s son, who in the post-flu age becomes a self-styled prophet with a cult of feral children. A far more sinister and remote figure in Mandel’s novel, the Tyler of the series (played with quiet anguish by Daniel Zovatto) is likewise given a more redemptive path.

This route to redemption runs through Shakespeare’s “Hamlet,” which is the only play we see the troupe perform, in excerpts that are vividly performed and visually stunning. Significantly, an early performance features Kirsten in the lead role, in which she is visibly processing her grief, while a later iteration features Tyler as the Danish prince, as he works out his complicated resentments toward his parents and the pre-flu world they represent.

The throughline that throbs through the book, and even more strongly through the series, is the sense that the way we live and relate to each other now, amid the heedless abundance and seeming connectivity of a global economy, can feel as alienated and inhuman as we might imagine any post-apocalyptic hellscape to be. The world of ostensible comfort we see in the pre-flu times of “Station Eleven” is strikingly bleak and empty, while the post-flu age is alive with particularity: the snort of a horse, the twang of a warped piano, the serendipitous beauty of the Symphony’s found-art costumes.

Not that the post-flu times of “Station Eleven” are idealized or rosy. Those who live to the story’s end are dogged by regrets and tested by painful lessons. Indeed, the journey of most of the characters in “Station Eleven” is from self-protective emotional withdrawal, even in some cases misanthropy, to vulnerability and connection. We should all be so fortunate as to reach similar wisdom without the clarifying punishment of a plague.