The spirituality of ‘cringe’ 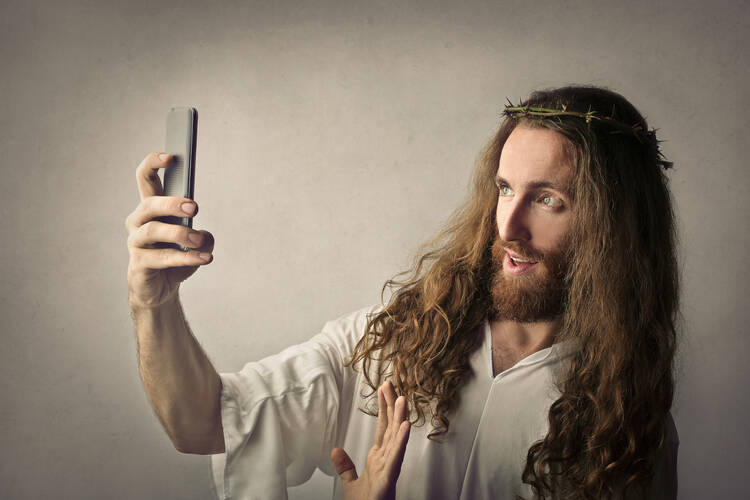 When I was growing up, my mom had this painting of Jesus. His head was thrown way back, and he was laughing really hard. I really hated him.

It started with the hair. It was long and wavy, and it looked amazing. This is a guy who wandered the desert wearing what seemed to be burlap. He and his friends bathed in lakes and rivers, if at all. There is no way you live like that and get that hair, let alone that perfectly trimmed beard. Models today have a hard time looking that good, and they have people for that.

And then why was Jesus laughing? I know I was supposed to think Peter had just told a really funny joke offscreen or they were all out to dinner and the host’s daughter had just done a magic trick. But to me, it seemed like Jesus was trying way too hard, like he knew he was being watched and really needed people to know he was just like them. “Look at me, I’m laughing!”

Last week, after over 50 years of this experience, I was finally given a word that captures what I feel when I see any of the many Laughing Jesuses.

If you look online today, you can find a hundred versions of Laughing Jesus. They all make me deeply uncomfortable.

Last week, after over 50 years of this experience, I was finally given a word that captures what I feel when I see any of the many Laughing Jesuses. It came from my 11-year-old goddaughter and her siblings. They had recently seen the new Disney movie “Encanto.” While they loved it, the songs, they said, were “cringe.”

Cringe: People of my generation know it as the word for when you feel such deep discomfort, embarrassment or anxiety that your face instinctively curls up in on itself, as though in self-protection. It was basically the anxiety version of tasting something sour.

In the world today, where the internet has turned language into a never-ending flow of play, meta-references and change (for the love of God, would someone please explain to me what a milkshake duck is and how it is different from a problematic fave?), the word cringe has taken on a much more prominent role, with young people regularly referring to the things that might make you cringe as themselves “cringe.”

Cringe is about trying too hard, or allowing your private feelings or desires to be expressed publicly. Earnestness? So cringe. Sentimentality? The same.

Among the things that are cringe (i.e., cringe-y): Your mom telling you “I love you” outside school. A gym bro slamming protein powder and flexing for the Insta reel/TikTok. (Yes, one of the younger members of our staff wrote this sentence.) Your dad saying “That’s lit.” This article.

Cringe is about trying too hard, or allowing your private feelings or desires to be expressed publicly. Earnestness? So cringe. Sentimentality? The same.

But here’s the thing: There can be a pressure to conform or hide yourself away in some iterations of cringe that are not only themselves cringeworthy but troubling. Being who you are, being sincere and forthright—these are things that should never be considered a reason for embarrassment. And to suggest otherwise is just trying to drag people down or stifle their joy. I get it, Lin-Manuel Miranda is earnest. That may not be your vibe; it may even make you physically cringe. But it is not bad. Your mom hugging you is not bad. It’s who they are.

Maybe Laughing Jesus isn’t really cringe. Maybe he’s trying so hard because he feels like he has to.

What I do like about the term “cringe” is the way it captures the intense awkwardness of some of our efforts as a church to seem hip and relevant. Laughing Jesus might as well have an LOL stamped on his forehead and be wearing a YOLO T-shirt, the image is so desperate for us to believe Jesus is fun and relatable. It is a strange paradox: the more human these images try to make Jesus, the less human he seems. Laughing Jesus is basically the Christian version of the uncanny valley.

At the same time, stepping back, I can see how Laughing Jesus and his spooky brethren are in some ways a distillation of the feelings about Jesus that every Catholic parent wants their children to have. He loves kickin’ it old school and that new Spider-Man film with what’s his name and what’s his name and all those TikTok movies you watch all night. That is to say: Jesus is someone you can talk to, someone who is safe and won’t judge you.

This is a good message, and a vision of Jesus that I suspect is more important than ever today. It is pretty hard to motivate anyone to trust in God when the public face of his church seems mired so often either in attacks on its own (including even condemnations of everyone’s favorite sassy grandpa, Pope Francis) or in admitting new horrifying revelations of sexual abuse and cover-up.

Church officials frequently ask how we can evangelize the young. But so often today it seems like the answer is we have to start by re-evangelizing ourselves. Maybe Laughing Jesus isn’t really cringe. Maybe he’s trying so hard because he feels like it is the only way we’ll be willing to possibly trust him.