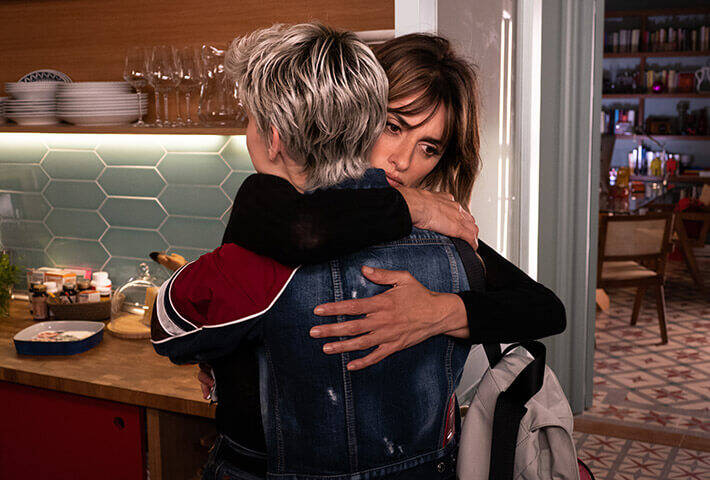 Pedro Almodóvar is the most important and influential Spanish filmmaker since Luis Buñuel and for the better part of 40 years has personified both the cinema of Spain and the country’s conflicted relationship with the church: “Dark Habits” (1983) can be dismissed as a “nunsploitation” film, but “Bad Education” (2004) was an insightful, even tender memoir about the effects of priestly sex abuse.

But it is in his approach to women, specifically mothers (“All About My Mother” being the most obvious title) that Almodóvar reveals the legacy of a Catholic boyhood: His regard is something like veneration. And not to put too fine a point on it, his latest, “Parallel Mothers,” is also about resurrection.

For the better part of 40 years Pedro Almodóvar has personified both the cinema of Spain and the country’s conflicted relationship with the church.

Penélope Cruz, Almodóvar’s actorly muse, plays Janis, a successful magazine photographer who shoots an eclectic mix of subjects for her publication—women athletes, transgender models and, most consequentially it turns out, an archeologist named Arturo (Israel Elejalde). Janis takes the opportunity to ask Arturo for help with the exhumation of her great-grandfather, who lies, along with other long-buried victims of the Spanish Civil War, in a mass grave near her hometown. None of the organizations devoted to recovered history/memory has been willing to assist; the town claims there is no money for such a reclamation, though Janis doesn’t buy it. Arturo, who sits on an influential foundation, agrees to push the project. They then have an affair. Janis then discovers she is pregnant.

Arturo makes predictable noises about there being “options,” but Janis is adamantly opposed to anything but having her baby. She is close to 40, never thought it would happen and is overjoyed. In the maternity ward, she meets the very young Ana (Milena Smit), who is as unhappy as Janis is gleeful: Ana’s mother, Teresa (Aitana Sánchez-Gijón), by her own admission, never had any maternal instinct; her acting career always did, and does, come first. Janis, by default—but also by virtue of her happiness—becomes Ana’s role model. Together, they and their babies gravitate into a kind of family, though tragedy, cruelty and some unexpected and perhaps misdirected desire will threaten to derail them. There are plot twists galore. It would be unfair to disclose them.

There is usually a moment in an Almodóvar movie where one says, “This is beautiful.”

What won’t be a surprise for those familiar with Almodóvar is the film’s mix of restraint and extravagance, the director’s delirious use of color, his ecstatic aesthetic and a sense of the theatrical—an occasional staginess—that has a counterintuitive effect on the viewer: Almodóvar’s instincts, his Douglas Sirk-ish sense of melodrama, is tempered by the fact that he frames many of his more important scenes against a static backdrop, his characters talking not moving, the camera not swooping or soaring but simply drinking things in and compelling us to do the same. The implication: that what is happening is too important for visual distraction. We must listen to these women as much as watch them, each of whom became mothers via different circumstances and motivations but who are fonts of love regardless.

There is usually a moment in an Almodóvar movie where one says, “This is beautiful.” As “Parallel Mothers” proves, it is not always about the palette, or the beauty of the cast, or the visual fluidity of which he is so effortlessly capable. It is his stealthy way with love, and an always inventive manner of expressing it.

Google “Spanish cinema” (the way I did, anyway) and the first three films that pop are made by an American (Woody Allen, “Vicki Christina Barcelona”), a Mexican (Guillermo del Toro, “Pan’s Labyrinth”) and a Frenchman (Cédric Klapisch, “L’Auberge Espagnole”). So much for the internet. Spanish cinema is owned by Pedro Almodóvar. As long as it is, it’s in worthy hands.