The ‘Harry Potter’ reunion is just what 2022 needs 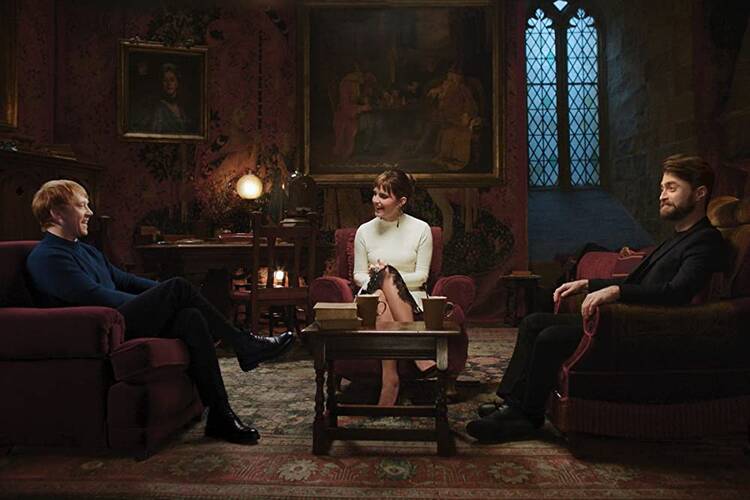 If I could Avada Kedavra every year since 2019, I would. Goodbye 2020, goodbye 2021, hello non-pandemic world where none of it ever happened.

To want to magic away Covid-19 is wishful thinking at its very worst, I know. But that impulse is a forgivable (and I think common) offense. And it is exactly why “Harry Potter 20th Anniversary: Return to Hogwarts” is what 2022 needs.

As if the producers knew we deserved it after another set of challenging holidays, the reunion special was released on HBO Max at midnight PST on Jan. 1. It stars over 20 actors and directors from the eight-movie series, reuniting to reminisce against the backdrop of various sets used in the movies. The Gryffindor and Slytherin common rooms, Dumbledore’s office, the Burrow, the Great Hall and more are just as much part of the reunion as the stars are. Like the actors seeing each other for the first time in years, we greet them as old friends we are excited to see again.

For “Harry Potter” fans, “Return to Hogwarts” is a journey home. Filled with nostalgia and comfort, it is a tear-jerker from the start.

For “Harry Potter” fans, “Return to Hogwarts” is a journey home. Filled with nostalgia and comfort, it is a tear-jerker from the start, with the iconic soundtrack soaring as actors find letters inviting them back to Hogwarts. But the reunion is more than just the franchise basking in its popularity; its new interviews and behind-the-scenes content manage to feel fresh and new—no small feat given the 20 years of media attention the movies have received since the release of “Harry Potter and the Sorcerer’s Stone” in 2001.

The special is a charming peek behind the curtain that is no less magical for showing how some of the movie magic was made: Helena Bonham Carter (Bellatrix) and Daniel Radcliffe (Harry) meet in the set for Gringotts Wizarding Bank, only to find animatronic goblins still stored behind their bank teller desks. Director Chris Columbus reminisces about when the late Richard Harris (Dumbledore in the first two movies) mistook the robotic Fawkes the phoenix for a live trained bird. Daniel Radcliffe (Harry), Emma Watson (Hermione) and Rupert Grint (Ron) recall real, lit candles falling from the ceiling during filming when they burned through the fishing line that made them appear to float.

But more than the behind-the-scenes look at production, the real gems of the special are the interactions between the actors as they reunite. “Return to Hogwarts” exudes warmth. Everyone remembers their time on set fondly, even while not shying away from discussing the pressure of the limelight or the occasional loneliness of being child and teenage actors.

Several of the interviews end in heartfelt “I love you’s”; to see that love reflected between the actors is powerfully uplifting, particularly in a time that has been dominated by isolation and social distance.

The love that the actors share for each other is obvious, whether laughing about casting auditions and co-star crushes or talking seriously about the lifelong impact of mentors on set. Much of the power of “Harry Potter” revolves around the series’s central focus on love. In the books and films, love is a powerful, protective, eternal force. The conflict between Harry and Voldemort ultimately boils down to one of love against hatred. In the reunion special, several of the interviews end in heartfelt “I love you’s”; to see that love reflected between the actors is powerfully uplifting, particularly in a time that has been dominated by isolation and social distance.

The pandemic has put us all through the collective wringer—mentally, physically and emotionally. When the clock struck midnight to ring in the new year, instead of feeling festive, I was struck by an overwhelming feeling of “I don’t want to go through this again.” It is hard to celebrate a new year when you know it’s going to hold much the same as the old: shutdowns, health scares, sickness, uncertainty. But “Harry Potter” has always been about finding goodness in troubled times. As the famous Dumbledore quote goes, “Happiness can be found even in the darkest of times, if one only remembers to turn on the light.” As someone who played on Loyola Chicago’s Lumos Quidditch team in college (yes, it’s a real sport!), I will readily admit my bias. But I think “Return to Hogwarts” is part of turning on that light.

Watching the “Harry Potter” reunion made me realize I have been trying to look the world right in its miserable eye without blinking. It felt like the right thing to do, like I owed it to the people who have died from the pandemic to understand how bad the situation is, how Covid-19 might never truly go away. But trying to stare down the suffering of the world without allowing myself a reprieve was harming my mental health, and it took the reunion special to even realize I had been doing it.

“Return to Hogwarts” gives us permission to put down what we are carrying and unabashedly engage with love, nostalgia, comfort and hope.

“Return to Hogwarts” made me feel like Dobby being given a sock and becoming a free elf. It gives us permission to put down what we are carrying and unabashedly engage with love, nostalgia, comfort and hope, all without an ounce of the cynicism so many of us have been clinging to try to protect ourselves from the inevitable disappointments and hurt of the pandemic.

It tells us it’s O.K. to reminisce about a favorite series, beloved friends we miss, moments of connection with strangers in a movie theater or book release line. It reminds us that the future can and will still hold these wonderful things, even if not right away.

While it is necessary to engage with the reality of the pandemic in a healthy and realistic way, it is equally important to allow ourselves some reprieve from it. Many of us grew up with the “Harry Potter” movies or books as a foundational part of our childhoods. For others, the books conjure up memories of reading with family, friends or kids of their own. “Return to Hogwarts” is a fun, touching, illuminative special, a joy and pleasure to watch for anyone who has loved “Harry Potter.” It’s a cure for new year blues, an antidote to cynicism and an intravenous infusion of love and nostalgia: in short, everything 2022 needs.

The special ends with a clip of perhaps the most resonant quote from the series. When Dumbledore asks Snape of his continued love for Lily Potter “after all this time?”, he may as well be asking fans about their enduring love of the series. The late Alan Rickman answers for all of us watching the 20th anniversary reunion when he responds, “Always.”