Sorry, Mark Zuckerberg: We Catholics want the real world, not the metaverse. 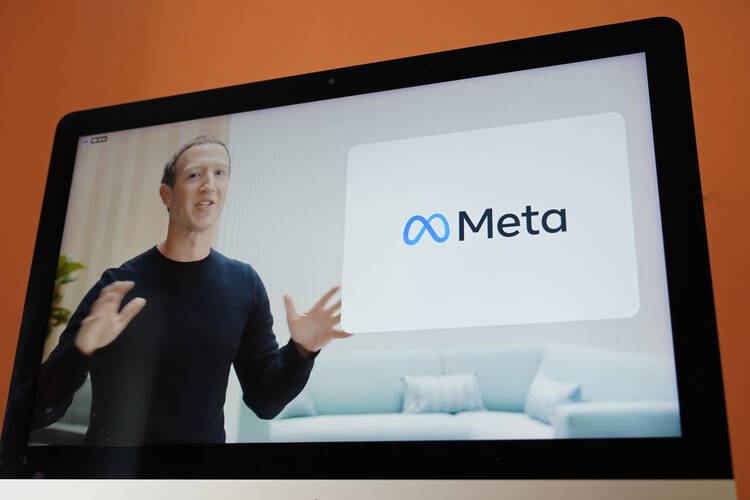 Seen on the screen of a device in Sausalito, Calif., Facebook CEO Mark Zuckerberg announces their new name, Meta, during a virtual event on Thursday, Oct. 28, 2021. (AP Photo/Eric Risberg)

Last week Mark Zuckerberg tried to distract the world from what seems to be an endless series of shocking revelations about Facebook with his announcement that the company is rebranding itself as Meta. Its overarching priority will shift to the development of a virtual universe, “the metaverse,” within which we will supposedly be able to do everything we need—shop, work, have relationships—and also anything we ever wanted. “We are at the beginning of the next chapter for the internet,” Mr. Zuckerberg wrote in an online letter. “And it’s the next chapter for our company too.”

In many ways the move was classic Zuckerberg, light on taking responsibility for the company’s problems and strong on doubling down. “Oh, you have trouble with the way Facebook uses your data, boosts hate speech and manipulates everyone toward hostility and division? Cool—now we’re going to infiltrate every other aspect of your reality as well.”

Mark Zuckerberg tried to distract the world from an endless series of shocking revelations about Facebook with his announcement that the company is rebranding itself as Meta.

As one would assume, the internet was not having any of it. The Twitter account for Wendy’s joked that it was changing its name to “meat.” Jewish users pointed out that in Hebrew “meta” means dead, making it not exactly the best starting point for a new venture—although another user noted that this would mean “the metaverse is a universe of zombies,” which seems fitting. U.S. Representative Alexandria Ocasio-Cortez suggested the name was short for “We are a cancer to democracy metastasizing into a global surveillance and propaganda machine for boosting authoritarian regimes and destroying civil society...for profit!”

But as much as we might all want to dogpile on Mr. Zuckerberg andpray that governments of the world will institute much stronger regulation of his products and company, the pull of global society toward the virtual is both undeniable and also in some ways important, as the last 18 months have demonstrated. We already have one foot in some kind of metaverse. That is not inherently a bad thing, and it is also not going to change.

In a way, Mr. Zuckerberg’s announcement offers an opportunity for us as Catholics to step back and consider how we want to think about the world that is and the one that is to come. Mr. Zuckerberg paints his metaverse in bright colors: “Think about how many physical things you have today that could just be holograms in the future,” he writes in his letter. “In this future, you will be able to teleport instantly as a hologram to be at the office without a commute, at a concert with friends or in your parents’ living room to catch up.” In a video, his avatar travels to a space station where he plays cards in zero gravity with the avatar of four friends.

Zuckerberg’s announcement offers an opportunity for us as Catholics to step back and consider how we want to think about the world that is and the one that is to come.

Meanwhile the actual world, the one in which we are alive and breathing, becomes more or less just the staging area for our lives—or the “meatverse,” as Oculus executive Jason Rubin described it in a 2018 letter to a Facebook board member pitching this idea of a Metaverse.

If you were going to catalog heresies of the Catholic Church, the one that has dogged it both the longest and right from the start is the idea that the physical world is a hateful place of sin and death that must be rejected. In this version of Christianity, Jesus was not a human being—not really—because, as God, he would never have allowed himself to be sullied by stinking, sinful flesh.

Even to this day, the church’s thinking on sexuality struggles with these ancient notions. How many Catholics still believe that sex is intended only for procreation—or worse, that pleasure is itself somehow bad?

God sees our humanity and our world as fundamentally good, as loci of grace and revelation.

In fact, the doctrine of the Incarnation teaches that God entered into our world not as some kind of observer or God in a human Halloween costume, but as an actual human being, with all the vulnerabilities and fears that we all know and experience. Some might present that as Christ “lowering himself” to our level, but theologically we also believe it means that God sees our humanity and our world as fundamentally good, as loci of grace and revelation. “He comes not from above, but from within,” Pope Francis writes in “ Laudato Si’.” “He comes that we might find him in this world of ours.”

None of that is to say having all of your work meetings on Zoom or spending a weekend on Xbox Live is a sin (although my dude, get that Vitamin D). But it is to say that as Catholics our fundamental disposition toward the physical world is that it is precious and meaningful. Meanwhile, Mr. Zuckerberg’s relationship with the physical world seems more like the dualists of old. “The metaverse isn’t anything new (see second life/sims/ vrchat etc),” the London tech journalist Hussein Kesvani wrote last week. “What seems very sinister about this is that it follows the same logic as other tech companies: that the material world is not worth saving and protecting.” Mr. Zuckerberg’s comments are “fully realizing the idea that bodies are by and large disposable.”

Every weekday, the staff of America huddles at 10 a.m. to report in on various aspects of our work. Given both the realities of the pandemic and just life in the 21st century, we can’t do that all in person. Some people are in the office, while others join from home.

Our production editor, Robert Collins, S.J., while the most senior among us, always has the best backgrounds when he calls in. Of late, he has been using an animated classroom in which various fruit and school utensils sit in seats around him. It is a frequent source of conversation and delight.

But after weeks of seeing it I unconsciously started to believe that Father Collins lives in some kind of spacious environment. (No, I didn’t think he lived in an animated classroom populated by anthropomorphized fruit. Or if I did, it was only slightly. I like the animated apple.) Then, a couple weeks ago, he and I had a video call online, and I discovered that his actual physical room is pretty simple—you know, like everyone else’s.

And therein lies the monkey’s paw of what Mark Zuckerberg is selling. A metaverse offers a chance to overcome obstacles and interact in interesting ways, perhaps to make day-to-day life more playful and dream-like and supposedly much more climate friendly, too. (Where will we get the energy to power all these holograms? Who cares! We get to live in a video game!)

Yet at the end of the day, no matter what “patches” or add-ons the tech gurus of Silicon Valley might offer to make (for the low, low price of our privacy and mental health), we remain now and forever embodied creatures living in a physical world. And rather than being cause for a three-dimensional sad face emoji sent via a holographic owl, we Catholics believe that is a blessing.