You loved ‘Mare of Easttown.’ These British police dramas could be your next obsession. 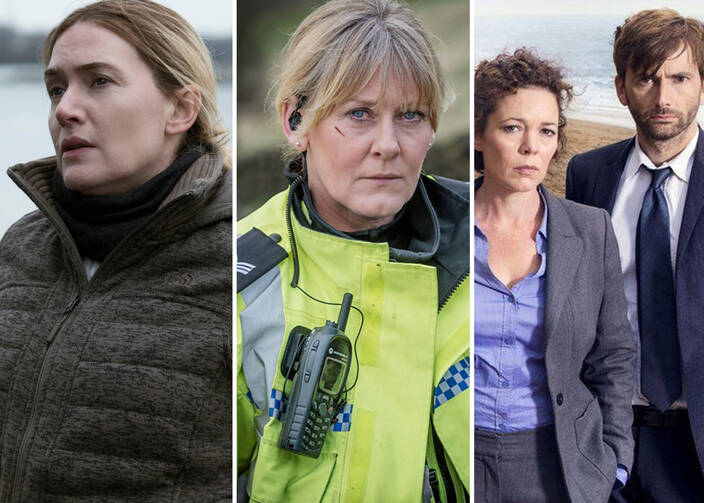 A middle-aged female cop in a small town, divorced and distraught over the suicide of her adult child and struggling to raise her all-but-orphaned grandson, is faced with an unsolved crime that may implicate some of her closest friends. If that sounds like the premise of the first-rate HBO drama “Mare of Easttown,” which had a successful run last spring and recently garnered some well-deserved Emmy Awards, it is—but it also happens to be the grim, gripping outline of a great BBC series, “Happy Valley,” which first aired in 2014.

The similarities did not go unnoticed among fans, especially in the U.K., who speculated about the debt that “Mare” creator Brad Ingelsby may have owed to “Happy Valley” creator Sally Wainwright. Of course, what makes both shows great in their own ways is not so easily replicable, as it’s not the murder-y stuff so much as the texture and specificity of their depictions of contemporary life that elevate them beyond mere whodunits. Inglesby is a native of the Philly suburbs he depicted with such loving but unsparing granularity and nuance in “Mare,” and Wainwright has made her native Yorkshire, in northern England, the canvas for a variety of taut, lively British shows, including the romantic comedy-drama “Last Tango in Halifax” and the historical series “Gentleman Jack.”

These shows shine an intimate, even glaring light on humanity in its less flattering manifestations.

“Happy Valley” isn’t the only British crime show that “Mare” seemed to evoke. Its mix of observational detail and narrative jolts felt familiar from a number of series you can sample on a variety of streaming services, including but not limited to BritBox. For those who don’t gravitate to police procedurals per se but find the cocktail of social realism and crime drama fairly irresistible—for me, “The Wire” will always trump “Law and Order”—the Brits have carved out a distinctive niche, somewhere between Mike Leigh and Miss Marple.

With such observational detail at hand, though, is a murder plot really necessary? I did hear some critics of “Mare” lament that audiences can only seem to sustain interest in an examination of social class, addiction and anomie in the suburbs if there is a body count. Indeed, some of “Mare’s” twists were far-fetched and lurid enough to make me wonder if they were the equivalent of signal flares to keep our attention. But this is a bait-and-switch (and a criticism) as old as Dickens. And at their best, such sticky plots are like the UV lights that show the hidden blood at a crime scene: They get us to see human behavior in stark relief by pushing individuals, families and communities to extremes.

The Brits have carved out a distinctive niche, somewhere between Mike Leigh and Miss Marple.

That is the genius of Chris Chibnall’s crime drama “Broadchurch,” as fitting a companion piece to “Mare of Easttown” as you will find. Over two seasons, it zeroes in on a shocking crime in a close-knit Dorset seaside town with surgical precision and patience, spending crucial time getting to know a panoply of interconnected characters, so that when the revelations and counter-accusations pour in, and neighbors, siblings and spouses find themselves turning against each other, each reversal stings with unique power. The show has a third season, also strong, and though it is unrelated to the original plot, it retains the show’s secret weapons: Its two lead detectives, played by two of England’s best, most watchable actors, nail-sharp Olivia Colman and bone-dry David Tennant. The tetchy, complicated working relationship of these two, rendered with affection but with zero sentimentality, is as compelling as the byzantine crime plot.

A dual-cop act is also the key to Sally Wainwright’s first series, from 2011, the engaging “Scott & Bailey,” set in a police department in Manchester. In many ways a more conventional show, mixing the workplace and personal travails of the two female detectives of its title with their sometimes perfunctory crime-solving, it is nevertheless an involving brew. It is especially good in defining one of Wainwright’s signature strengths: creating sympathetic but flawed female leads. Rachel Bailey (Suranne Jones) is brilliant and brave, as well as perpetually single and self-destructive, while her partner Janet Scott (Lesley Sharp), though comparatively stable and responsible, grows increasingly bitter about her family and job obligations. And they’re not even the show’s best character; that would be Detective Chief Inspector Gill Murray (Amelia Bullmore), their brittle female boss, whose skill at navigating her male-dominated field masks a terrible personal toll.

“Broadchurch” is as fitting a companion piece to “Mare of Easttown” as you will find.

For something in a darker, more obsessive key, there is “Marcella,” a British series created by a Swede, Hans Rosenfeldt, that is equal parts intriguing and disturbing. Its title character, played with mesmerizing ambivalence by Anna Friel, not only fits the “Mare” template of flawed female cop at odds with her family and coworkers; it also shares with many of the shows I’ve mentioned an unsettling focus on crimes that involve or implicate young children. That is one reason I only made it through the show’s first season, as the second season’s child-abuse plot is too gratuitously grisly for me.

The first season has plenty to recommend it, though, especially the tricky gambit of making Marcella a kind of unreliable protagonist: Prone to both jealous rage and occasional post-traumatic blackouts, she may or may not be guilty of the show’s central murder, so that her investigative efforts range dangerously between covering her own tracks and finding the real killer (if indeed it wasn’t her). This difficult balancing act leads the show into some odd narrative dead ends and shocking coincidences. But as anchored by Friel and an excellent supporting cast, it’s a strong entry in this category.

Of course, as I think about “Marcella,” I have to wonder: Is this show really offering gritty social realism, or just soap opera with some spilled blood? I guess I’d respond that, while some of the shows I have mentioned here don’t necessarily have the same acuity about social class and gender politics as “Mare” or “Happy Valley”—let alone a critique of the criminal justice system or of police conduct—all of them shine an intimate, even glaring light on humanity in its less flattering manifestations. This has been the territory of drama since the Greeks, and there’s real catharsis in it if we can bear to look.