I like many of Glennon Doyle’s messages for women. But some of her ideas about family are problematic. 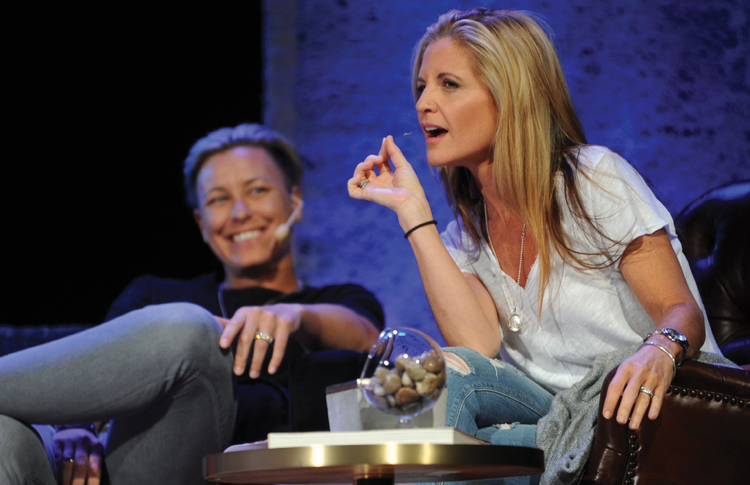 When Glennon Doyle speaks, women listen. Doyle is part memoirist, part life coach. And she has a knack for tapping into the zeitgeist of progressive, white, female suburbia. Doyle’s most recent memoir, Untamed, is about falling in love with the professional soccer star Abby Wambach, ending her unhappy marriage to Craig Melton and building a new life as a blended family.

It’s a good story and has been a New York Times bestseller for over 77 consecutive weeks. Doyle’s ideas matter; many people take them as gospel. She describes her Instagram followers as a “church,” while throwing shade at actual churches: “Religion is for people who don’t want to go to hell. Spirituality is for people who’ve already been there.”

I am a fan of Doyle’s old-school feminism. She is at her best when encouraging women to model loving their lives instead of teaching their children by example that being a mother is about being miserable. Women do need to be reminded that it is okay to build a life that is very different from the life that their parents or their culture might have imagined for them.

But some of Doyle’s other ideas, like the notion that your nuclear or chosen family is an “island,” are symptomatic of a New Puritanism that is dividing our country. New Puritans on the left and the right are creating echo chambers by encouraging their adherents to end friendships, cut off family members and cancel their neighbors on social media for wrong-think, or even ambivalence.

In the chapter “Islands,” Doyle writes that her mother, who lives in another state, was having a hard time accepting her decision to divorce her husband and marry Wambach. Doyle spends a great deal of emotional energy trying to get her mom to understand what Doyle knew in her bones: That this was the best, truest and most life-giving decision for herself and her family. Doyle doesn’t say that her mother was abusive or homophobic, but that she was worrying and calling her worry love.

New Puritans like Doyle are creating echo chambers by encouraging their adherents to cut off family members and cancel their neighbors.

In one of the book’s “aha moments,” which Doyle describes as “the moment I became an adult,” she explains to her mom over the phone that she can’t come visit her grandchildren until she can come without any hang-ups. Doyle says, “When you are ready to come to our island with nothing but wild acceptance and joy and celebration for our true beautiful family we’ll lower the drawbridge for you. But not one second sooner.”

As she has done in all her other books, Doyle once again has her finger on the pulse of a certain kind of Americana. Indeed, more parents are estranged from their adult children than ever before. Joshua Coleman writes in The Atlantic: “Deciding which people to keep in or out of one’s life has become an important strategy to achieve happiness. While there’s nothing especially modern about family conflict or a desire to feel insulated from it, conceptualizing the estrangement of a family member as an expression of personal growth as it is commonly done today is almost certainly new.”

Contemporary Western culture hates unchosen bonds. The dependence of children on their parents, and aging parents on their adult children, is a problem for us. It attacks the myth of the self-made woman and limits her freedom to choose herself. So being an island taps into a powerful fantasy.

As Sebastian Junger writes in his book Tribe, people in affluent societies like our own are eight times more likely to experience depression, anxiety and other serious mental illnesses. He theorizes that this is because in affluent societies we have “perfected the art of making people not feel necessary.” Elderly people in particular often feel irrelevant and cast aside, most seeing their adult children less than once a year.

In the not-so-distant past, our ancestors lived in societies in which they were almost never alone. Parents raised their children with other adults around. They weren’t alone with their kids all day, scrolling Instagram for some sense of connection. In a tribe, in a village, in a real extended family, everyone took part or it didn’t work.

In a tribe, in a village, in a real extended family, everyone took part or it didn’t work.

Today, the self as an island is largely a class-specific idea. A large extended family network is still valued by many working-class and immigrant communities. When you are poor and your car breaks down, guess who helps you fix it? When you need childcare after hours, guess who watches your kids? Working-class people and many people of color still understand that there are practical and emotional benefits to living close to sisters, aunties, cousins and friends who are like family, even when that means putting up with their foibles.

As Catholics, we have a similar worldview. For us, the basic unit of society is the family (and by extension our local church), not the individual. In households we learn how to dialogue with difficult people—homophobic uncles are still part of our family, even as we hope they will learn the error of their ways. The Catholic view of family is a school for holiness.

For Catholics, the basic unit of society is the family and our local church, not the individual.

There are spiritual benefits, too. Knowing your enemies humanizes them to you and you to them. Our country is polarized by political tribalism and the childish belief that everyone who disagrees with you is not only morally wrong but not worth talking to. We are hyper-divided—not just in our families but at work, at school and even in our neighborhoods.

I live in the same mostly affluent, mostly white neighborhood that I grew up in. When I was a kid, yard signs came out at election time and then they went in the trash. Today people keep yard signs up and huge flags on their trucks year round, often with hostile “political” messages on them. Face-to-face relationships with people who are very different from us are an antidote to this division. Family is sitting together around a table. It is encounter.

We need more villages and fewer islands, especially now. Part of why parenting during the pandemic has been so exhausting is because we weren’t meant to raise our children all alone. So it seems worth noting that the notion of family that Doyle is describing in Untamed, a couple alone with their kids, is relatively new. It is a concept embraced primarily by people who define their success by their ability to never have to ask anyone for help—unless you count the army of paid helpers, the people who cook their meals, dry clean their clothes, mow their lawns and throw the ball with their kids.

It it is possible to break the cycle and to teach your own children that you can love someone who is deeply flawed.

Of course, Doyle and anyone else navigating adulthood and divorce and coming out to parents has my empathy. It is incredibly hard, and everyone’s situation is unique. Sometimes a family member is abusive or has an untreated mental illness or addiction, and ending a relationship is the best choice. But most people need forgiveness. Most people change not by being ostracized but by being embraced. And change is slow.

It is possible to set a firm boundary without cutting someone off, though doing so is made extra hard if our own parents have modeled estrangement. But it is possible to break the cycle and to teach your own children that you can love someone who is deeply flawed. As Richard Rohr, O.F.M., writes, “If we do not transform our pain, we will most assuredly transmit it.”

We need more aging parents who are willing to do their own emotional work and to apologize when they screw up and overstep their bounds. And we need more adult children who can say both, “It is painful that there are parts of my life that are beautiful and good and true that my relatives will never understand” and, “It’s wonderful how good my family is to my children.” What would the world look like if we modeled for our children that family is family no matter what—that at our table, sinners are welcome?

Instead, some of purity culture’s biggest critics are often the quickest to develop new purity tests.

John Donne famously wrote: “No man is an island entire of itself; every man is a piece of the continent, a part of the main.” If the pandemic has taught us anything, it is that life is short and fragile and that most of us still need someone to call when we’re sick or in crisis or feel like we can’t carry on. For most of human history, that has meant relying on people we didn’t choose, but who also didn’t choose us.

Anna Keating is the co-author of The Catholic Catalogue: A Field Guide to the Daily Acts That Make Up a Catholic Life (Penguin Random House). She co-owns and lives above Keating Woodworks, a handmade furniture studio in Colorado. Her essays appear in The Hedgehog Review, Notre Dame Magazine and elsewhere.