Review: Netflix’s ‘Midnight Mass’ is Catholic horror at its best 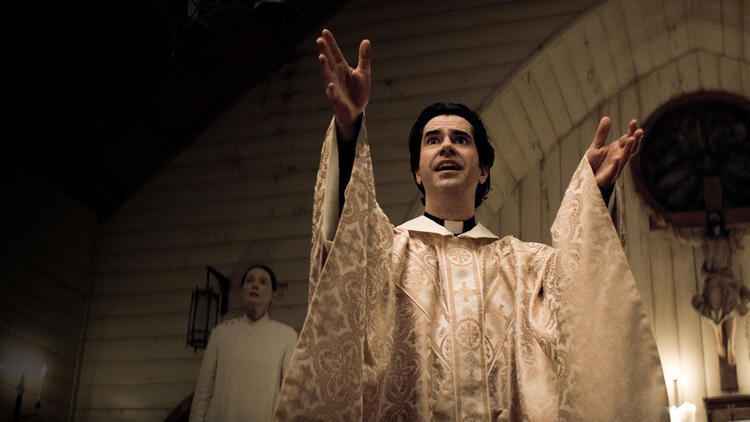 In an early episode of “Midnight Mass,” the new horror miniseries from Mike Flanagan (“The Haunting of Hill House,” “Doctor Sleep”), Father Paul Hill (Hamish Linklater) sits across from Riley Flynn (Zach Gilford). The men are alone in a recreation center named after the longtime pastor of St. Patrick’s Church on sparsely populated Crockett Island. The monsignor is missing—Father Paul tells everyone that the old priest is receiving treatment on the mainland, but neither the parish community nor the show’s viewers are convinced.

“I don’t really know how to start,” Father Paul tells Riley, and laughs. He is trying to start an Alcoholics Anonymous group for those struggling with addiction on the island, but so far it is just him and Riley, a former altar boy who has reason to doubt God after having accidentally killed a woman while driving drunk.

“Midnight Mass” feels like a throwback to the world that received “The Exorcist” in 1973.

“God can take that pain and turn it into something good,” Father Paul assures him. “Suffering can be a gift. It all just depends on us.” Riley scoffs. He killed someone because of his drinking, he says. “And God? He just kinda let it happen, didn’t he?”

Flanagan, a graduate of Archbishop Spalding High School in Severn, Md., and a former altar boy, has been creating atmospheric horror for years. But in this series about our attempts to deal emotionally and theologically with suffering, he has finally met his ideal subject matter.

“Midnight Mass”imagines a world where Catholicism is both an anchor and agitation. In some ways it feels like a throwback to the world that received “The Exorcist”in 1973. Back then, long lines of filmgoers—Catholics, Baptists and agnostics alike—sat through two exhausting hours of cinema and came out changed. They were not saved, but they were affected, and the reason is as much the powerful story and filmmaking as their willingness to suspend their disbelief.

Catholic horror that works leaves us open to the mysterious and the miraculous.

In lesser works of Catholic horror, the religion is mere ornamentation or artifice. Priests are pantomiming caricatures either rendered by writers for whom Catholicism is foreign or perverted into exaggeration for secular audiences by filmmakers who know better. Some might fall for the tricks, but Catholic viewers feel slighted deep in their bones. Great religious horror dredges up our doubts, our dark nights of the soul. Done poorly, it feels sour. Done well, it might be revelatory.

Catholic horror that works—and I would include “Midnight Mass” in that category—leaves us open to the mysterious and the miraculous. In one homily that ends on a disturbing note, Father Paul encourages the congregation to realize that Catholicism is both metaphor and matter: “God gives us miracles very rarely, here and there, but mysteries?” They are all around us, he says. The faith of a child is open to wonder, but as we get older, “The more we know, the less we bend.” Bound to reason, we seek to explain away mysteries.

As the episodes roll out, “Midnight Mass” moves squarely into the realm of horror, with all of the genre’s requisite gore and twists, yet its foundation is Catholicism as faith, practice and worldview.

“Midnight Mass” moves squarely into the realm of horror, yet its foundation is Catholicism as faith, practice and worldview.

Riley, scarred by his great sin, hesitates to trust anyone, except for Erin Greene (Kate Siegel), his childhood sweetheart. They go for walks and joke, but Erin is in pain herself: She is pregnant and alone, after finally leaving her abusive husband. As strange events on the island begin to multiply—and Erin experiences a tragedy of her own—she wonders what happens when we die?

Riley goes to Mass as a manner of appreciating, and appeasing, his parents, but Erin knows that he no longer believes. And his response is appropriately bleak: When we die, we are done. It feels like an empty sentiment, but Riley reminds Erin, death would mean an end to his terrible guilt. He would no longer have visions of the woman he killed. Meanwhile a life after death might mean continued remorse—or worse.

Erin, a believer, imagines a more sublime conclusion to existence. Heaven, for her, is not a place of “mansions, no rivers of diamonds, or fluffy clouds or angel wings.” “You are loved,” she says. “And you aren’t alone.” “I really hope that you’re right,” Riley says. Flanagan offers us theology through conversation: two old friends on a couch, wondering about the existential questions of life.

One great challenge of religion is the boundaries we place on the spiritual. Some of them are practical: parish council handbooks need to be prosaic. But there is also the way Catholics talk about Christ in public: the roll of the eyes they offer when they hear someone become a bit too, well, pious. But it is within that mysterious borderland of belief, between the maudlin and the sublime, that we find the power and the glory.

For a filmmaker like Flanagan, a cradle Catholic who has wavered between belief and disbelief, this is the richest storytelling territory. God is either among us or not—and the terrain between those possibilities is tremendous.

Great horror causes us to pause and ponder such theological inquiries. And the answers? We will all get them soon enough.