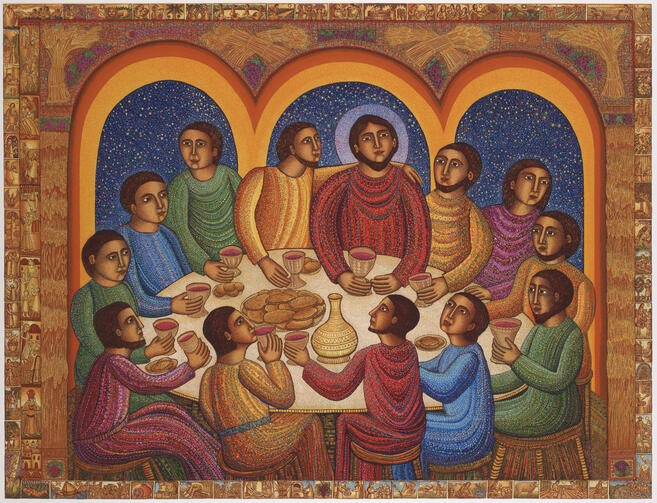 Once upon a time there was a boy, a boy who reappears in numerous artworks. He’s a child in “The Peaceable Kingdom” (1994). A young man in different versions of the “Dream of Jacob.” He wanders through the streets pointing to the persistence of beauty in “Rainy Day” (1981). And he’s an old man celebrating the enduring power of faith in “The Procession” (2007). Yet, it is in “The Inventor” (1975) where we get the fullest view of who this boy will become.

The man revealing himself through these works was one of the most beloved artists of our day, John August Swanson. He died on Sept. 23, 2021, at the Saint John of God Center in his beloved Los Angeles. But let us rewind.

His mother, Magdalena Velasquez, migrated to the United States from Mexico in 1928, fleeing violence and revolution. The memory of this heritage, captured in a photo of his family celebrating the Feast of San Juan Bautista in their native Chihuahua, became the inspiration for “Family Picnic” (1973). In it, Swanson lingers on the beauty of the moment just before the painful scattering of his family. He wanted to capture “a universal quality of family gathering, of memories of our families and our roots...laughter, stories, kindness, sharing, and eating.”

The other side of the family came from a world away. His father had left his native Sweden in search of work. Arriving at Ellis Island, he went from Sven August Svensson to John August Swanson. As the Great Depression hit, Gus moved around as a day laborer, settling in Los Angeles where he found work as a vegetable seller and met Magdalena. The couple was married at Maria Auxiliadora parish in Boyle Heights, and their son was born in 1938.

Magdalena, a gifted seamstress, found work and community with the Jewish tailors who had arrived fleeing anti-Semitic violence in Russia. She attended night school, became a voracious reader and volunteered as a grassroots organizer for labor, housing and voting rights. But life was difficult, and Gus took to drink, abandoning the family often and forcing his young son to scour the streets and jails looking for him.

Years later, the younger Swanson would attribute this self-destructiveness to his father’s shame that despite his big dreams, he could never provide for them. Tragically, Gus never made it to old age. The last time his son found him he was dying. It is this difficult life that develops into themes of loss and redemption in his work. The artist and his art were formed by his immigrant family’s wounded history.

His father absent, John lived with his grandmother, mother and sister. From them he learned his Catholic faith, Mexican traditions and the insight that social justice is required of a faithful Christian life. While struggling academically due to undiagnosed dyslexia, the boy learned to play the violin and longed to become a religious brother dedicated to serving the poor. At 15, he petitioned to enter a monastery in Ohio, but after nearly a year was sent home. The desire for religious life never left him, and until the end he lived in total simplicity, attending daily Mass.

As college neared, Swanson imagined another way to help people—as a medical doctor—and in the late 1950s attended Loyola University (today Loyola Marymount). Unable to complete his courses, Swanson confided to me he had been fearful he might “end up on the streets” like his father. Blessedly, a confluence of events guided him in a different direction. He became active in social justice movements, took a job at a paint factory and, most important, became a student of Sister Corita Kent in her night classes. 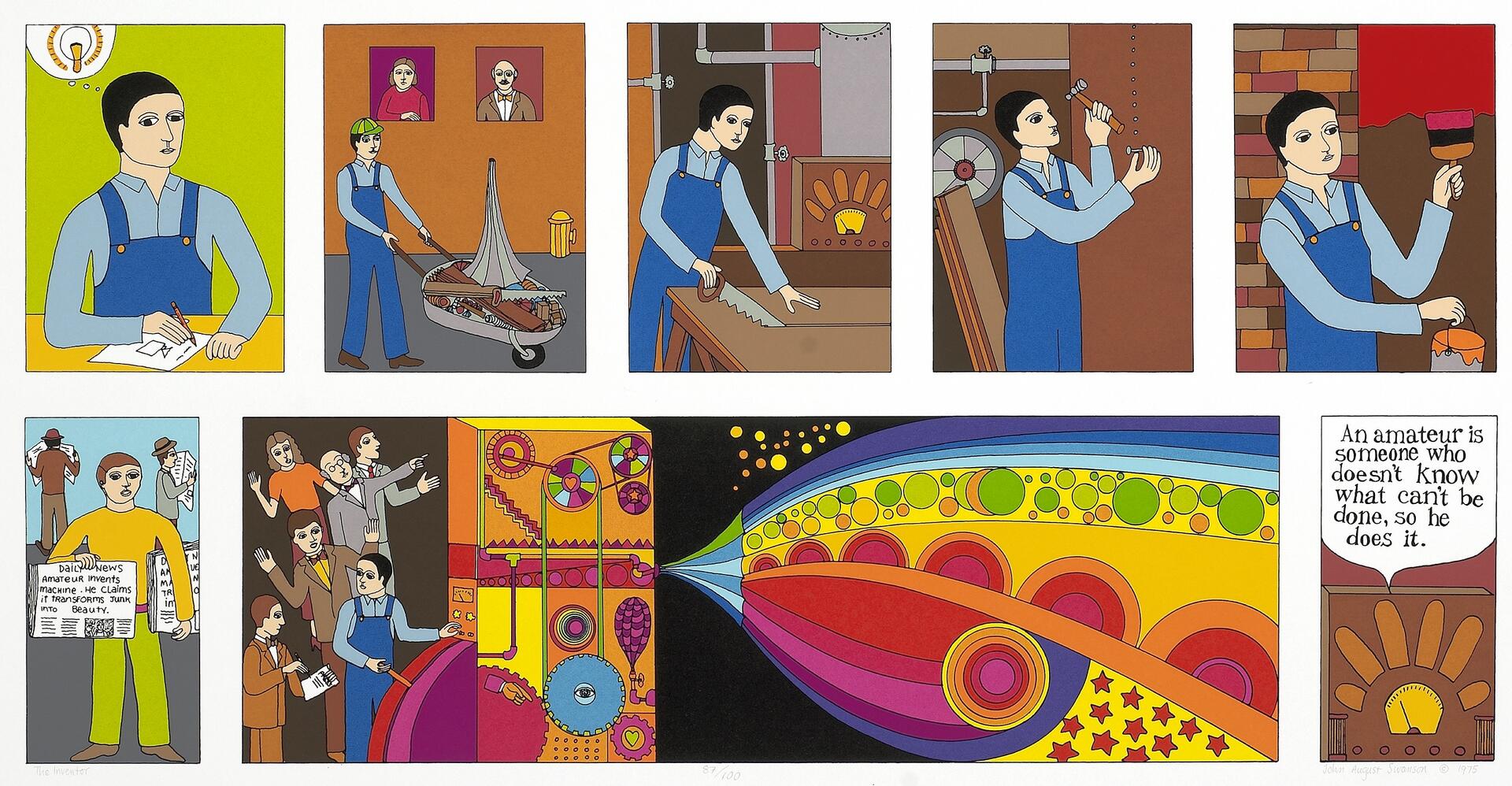 Corita, today acknowledged as a highly influential artist, helped Swanson discern his calling to bring together faith, justice and art just as she was doing. In “The Inventor,” he offers this moment of clarity in a series of vignettes. The young man has an inspiration, he gathers up discarded bits, cuts, hammers and paints, and then a newspaper headline announces: “Amateur invents machine, he claims it transforms junk into Beauty.” In the next scene we see the miraculous machine going full blast and pouring out abundant beauty into the world. The radio adds the final commentary (Swanson quoting Corita’s exhortation to him): “An amateur is someone who doesn’t know what can’t be done, so he does it.” It is an autobiographical work with a vision that continues to speak eloquently to young people.

Providentially for the world, Swanson pushed forward. His involvement in social justice activism led to his first screen prints—protest signs for farm worker rights. His job at the paint factory inspired experimentation with colors, a skill that distinguishes his luminous art. The “Procession” serigraph, which he considered his grand opus, is made up of a staggering 89 layers of unique colors. Today, the original painting is in the Vatican’s Collection of Modern Religious Art, and Swanson’s works are collected by The Smithsonian, The Tate, the Art Institute of Chicago, countless universities, seminaries, monasteries, and churches of all denominations.

J. Michael Walker, a fellow artist and friend, adds in praise, “I see in him the beatified Renaissance painter Fra Angelico, whose epitaph likewise applies to John: ‘When singing my praise...Say, rather, that, in the name of Christ, I gave all I had to the poor.’” Speaking from experience, doctoral student Emilie Grosvenor says:

To meet John August Swanson was to feel seen and loved and cared for, even if the interaction lasted only a few minutes. One would be hard pressed to leave his company without some sample of his work to lend hope, and to remind the person receiving the gift where the Spirit’s beauty, justice and hope are ever to be found: in community with the other.

Swanson’s generosity and boundless love are inseparable from his art and how he saw the world.

As an octogenarian, Swanson still insisted he was an amateur and was uncomfortable with the idea of fame. But his renown has never been about artistic technique. Rather it is founded on something more timeless: the truth of his art. By truth I mean that Swanson’s works are the fruit of encountering sacred texts, accompanying the vulnerable and living every moment awake to what he saw more clearly than most—God’s loving closeness and intimate involvement with God’s creation. As he told the biblical scholar and his friend Felix Just, S.J., “he wanted his artistic depictions of biblical stories to apply to all people, showing how God gives the ‘Gifts’ of water, light and life to all human beings.”

This religious sensibility makes his art ecumenical and often interreligious, arising out of lo cotidiano, the small details of life where the sacred reveals itself. As Robert Ellsberg, whose work as editor of Orbis Books Swanson deeply respected, told me, “Swanson draws on many currents and styles for art, but for all the complexity and symbolic depth of his work, it has always seemed that his natural audience was children—and those who retain the ability to see with the eyes of a child.”

For Swanson, the holiness of creation calls for fearless advocacy.

His exquisite “Last Supper” (2009) is a prime example. The table is circular; this is about community. There is no hint of Judas; this is not about betrayal. The wine is the color of raspberries and the bread resembles pan dulce; this is a family fiesta. And even Jesus’ halo might be the moon peeking out from behind him. This is a supper of celebration. The bridegroom is with us—how can we not rejoice? All of creation participates in this moment of Jesus sharing himself with his friends. Tiny tiles surround the room. Some are memories from the Hebrew Scriptures, others point to Christ’s teaching and still others celebrate nature and the workers whose labor makes bread and wine possible. There is an exquisite sense here that in God’s view, all of creation is holy and equally endowed with inviolable dignity.

For Swanson, the holiness of creation calls for fearless advocacy. “John has been a prophet,” says the Rev. Chris Ponnet, the pastor of St. Camillus Parish and Center for Spiritual Care, who accompanied him as chaplain to the end. Father Ponnet lists as evidence Swanson’s witness against war on the streets of Los Angeles and his steadfast opposition to anything that would exclude anyone from God’s love. Swanson also made immigrant rights one of his priorities. His “Madonna of the Harvest” (2010) presents the Virgin Mary as a refugee, and the vulnerable of the world are often his preferred subjects. Lawyer and immigration advocate Linda Dakin-Grimm sees in this art “the unity of all people in our daily experiences, struggles and joys. His work conveys real life difficulties with optimism and generosity, not walls and borders. He makes me want to do better, to be better.”

When news of Swanson’s illness became known thousands of messages poured in. Remarkably, hundreds of people counted him as a personal friend, and this he truly was. Among his many honors, during his last days he was made an honorary member of the Immaculate Heart Community, Corita’s community, and Loyola Marymount University presented him with the President’s Award “for his impact on the worlds of art, faith and social justice, and for bringing them and us together.” This he most definitely did.