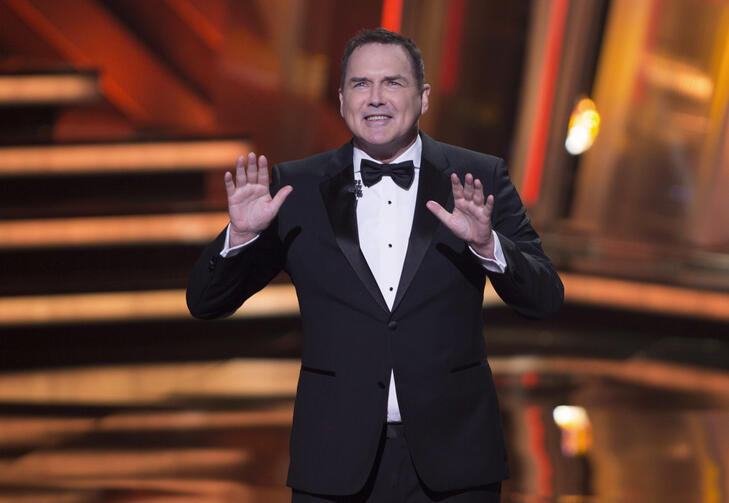 Last week I wrote a piece about John Mulaney, which was largely inspired by watching his first national appearance since rehab on “Late Night with Seth Meyers.” My interest in the article was largely in how people have been reacting to Mulaney’s revelation on the program that he and actress Olivia Munn—who he had recently announced he was dating, having divorced his wife—are also going to have a baby.

But one of our readers, Tim Melman, pointed out that I had missed a key part of the Mulaney-Meyers interview: their relationship. “I found the Mulaney ‘Late Show’ interview exceptionally moving,” he wrote on our website. “Above all, it made clear the deep love between two gifted, compassionate and vulnerable men. I was honored by their mutual candor. Kudos to both Seth and John for being exemplar men/persons for others.”

It is an excellent point and one that has been largely lost in the wake of the Mulaney-Munn-baby reveals. In an era when so much of what you see on talk shows is like the C.G.I. version of a human interaction, artificially happy to the point of being creepy, Meyers and Mulaney took the risk of having a real conversation about difficult and messy things. Their conversation was uncomfortable to watch at times, but largely because they were willing to talk about things that had no easy answers. And that’s just not something you see on television.

Meyers and Mulaney took the risk of having a real conversation about difficult and messy things.

The conversation around the passing of comedian Norm Macdonald has had a similar quality. Macdonald, who is best known for his work as the longtime anchor of Saturday Night Live’s “Weekend Update” segment, was beloved in the comedy community for his dry wit, his capacity to wait for the laugh and his shaggy dog stories. His “Tonight Show” tale of a depressed Russian moth that goes to a podiatrist is legendary (though to my mind his tale of the lost hope of Canada Jacques de Gotie is even better).

Macdonald was emphatic about his dislike for confessional comedy. “I’ve heard people go onstage and talk about cancer or some s***,” he said in a 2018 interview. “And I go, ‘Isn’t this what happens to everybody?’ They seem to think they’re singular in their story when their story is the most common story that could possibly be, which is suffering and pain.”

As Macdonald was doing this interview, he was in the seventh year of a nine-year battle against cancer, a battle he never told anyone about, not even his close friends. In the same interview he would note, “I think about my deathbed a lot.” When asked what he thought about it, he replied, “I think I should never have purchased a deathbed in the first place.”

In the wake of his death part of what Macdonald is being remembered for is the moments that he revealed the vulnerable human being underneath.

A stand-up persona, he felt, is “false by nature.” And yet, in the wake of his death part of what he is being remembered for is the moments that he revealed the vulnerable human being underneath. He adored David Letterman, a feeling that was mutual; Letterman invited him to be the last comedian to perform on his “Late Show” run and would later say: “If we could have, we would have had Norm on every damn week. He is funny in a way that some people inhale and exhale.”

Macdonald ended his Letterman set by telling a joke he had seen Letterman tell when he was 13, which he said was the best joke he ever heard. (It’s about the sign on garbage trucks warning not to drive too closely. “Another of life’s simple pleasures ruined by meddling bureaucracy,” he quipped. “Remember the old days, when dad used to pile the kids in a station wagon and we’d all go follow a garbage truck?”)

Then, getting very choked up, Macdonald said: “I know that Mr. Letterman is not for the mawkish and that he has no truck for the sentimental. But if something is true it is not sentimental. And I say in truth, I love you.”

Maybe the problem is not that men or “celebrities” don’t know how to be vulnerable or messy but that we don’t like to be reminded that they are. (And we are, too).

He did much the same at the 2008 Comedy Central roast of his friend Bob Saget. Rather than follow the standard roast format of firing insults at Saget, Macdonald did six minutes of intended-to-bomb jokes like “There are times when Bob has something on his mind. When he wears a hat!” or “He’s never bought Christmas seals. He told me he wouldn’t know what to feed them.” The set was such a failure in the eyes of the network that they cut most of it out.

Macdonald ended it by talking about how much he loved his friend. “In all seriousness, Bob is the first comedian that I ever saw perform when I was a boy, live. And I loved him,” Macdonald said. “One thing that bonds us as comedians is we’re bitter and jealous and we hate everyone else that has any success. But Bob honestly has never had an unkind word for anybody, and I love him and I hope everyone else does, so I just wanted to say that.”

After the announcement of Macdonald’s death, Saget responded similarly with a 38-minute middle-of-the-night video filled with stories, tears and love. “Last week I got a text and it just said ‘I love you,’” Saget relayed. “And I didn’t say much back, I just said ‘I love you Norm.’ And that was my last communication with him.”

Somehow Macdonald always knew how to draw people into those uncomfortable spaces of truth—and once there how to delight in them.

“We loved each other,” Saget said simply at another point.

You don’t hear men talk like this in public very often. And we can say, yeah, well that’s guys for you. But maybe it is also that as a society we do not allow space for that, that when two friends take the risk of having a very real conversation in front of us, we seize on the one shocking reveal and choose to ignore the rest. Maybe the problem is not that men or “celebrities” don’t know how to be vulnerable or messy but that we don’t like to be reminded that they are. (And we are, too).

John Mulaney has fallen off his nice-guy pedestal—and he might have something to teach the Catholic Church.
Jim McDermott

Somehow Macdonald always knew how to draw people into those uncomfortable spaces of truth—and once there how to delight in them. A lot of it lay in his own refusal to run away when things got difficult. Just as the whole country poised to shut down in mid-March of 2020, Macdonald did an incredible set about Covid at The Improv in Los Angeles. “It was a good idea you had,” he said to the crowd, “it was a good choice tonight to come out and sit beside total strangers.”

“I don’t want to alarm anybody at all, but I could sneeze on you and it would be the equivalent of like, a nine millimeter [gun].”

You can hear the crowd’s horror. He’s not wrong. But they’re laughing the whole time, and with relief.