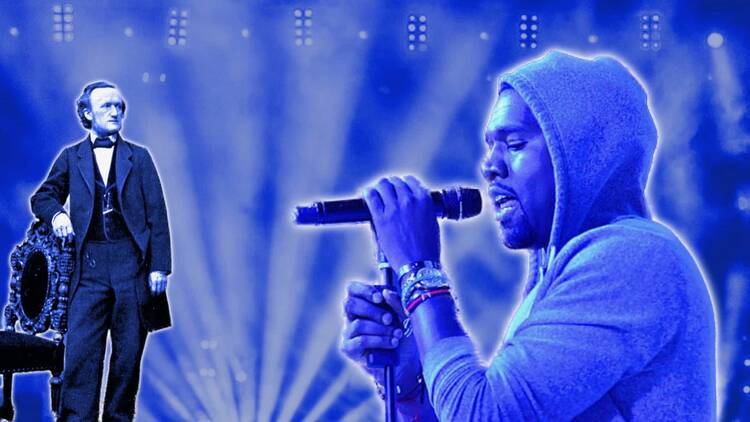 In August 1876, Bayreuth Festspielhaus was christened as an opera house erected exclusively for the performance and reverence of Richard Wagner’s work. Built to the composer’s obsessive specifications, it was to be a temple that celebrated his own celebrity and genius with an opera festival that continues to this day. Politicians, musicians, and luminaries from across Europe converged on the pageantry. Some were there for the music, others for the chaos, others for the status. And after the last chord of Götterdämerung (Twilight of the Gods) rang and the colossal operation died out, Wagner took the stage to raging applause and said, “You have seen what we can do—now it’s up to you to want. And if you want, then we shall have an art!” At least as Tchaikovsky recalled, no one had a clue what the madman meant.

Last Thursday, August 26th, 2021, Kanye West rebuilt his childhood home inside of Chicago’s Soldier Field and hosted a listening party for his new album, DONDA. In front of thousands of fans, he vibed on the porch with notable Satanist and alleged abuser Marilyn Manson and outspoken homophobe Dababy, sampled a grotesque years-old meme, lit himself on fire, and mimed a ritual of remarriage with his wife Kim Kardashian. No one, I surmise, has a clue what the whole thing means. The album was released early Sunday morning like a characteristically arrogant call to prayer, featuring a stable of some of hip-hop’s most illustrious and infuriating stars.

The album was released early Sunday morning like a characteristically arrogant call to prayer, featuring a stable of some of hip-hop’s most illustrious and infuriating stars.

Like it or not, Kanye is our Wagner – a master architect of pure spectacle and a man whose unhinged brilliance confronts us all.

Many artists transform art. But every couple generations, rare artists come along whose life and work burrow into the popular conscience and exert influence far beyond the culture industry. Wagner and West are two of those artists.

Both are virtuoso musicians, Wagner with a quill and West with a sampler, who treat music like a springboard for their grander ambitions. Both live lives of public turbulence and hubris. Both harbor unstable and occasionally diabolical political opinions (if you can call anything Kanye thinks an “opinion”). Both will be remembered far more for their daring stylistic innovations than their lyrics. Both enjoy their work being performed and championed by the very people they seek to alienate. Both are indisputable titans of popularity but somehow still manage to sound like agitating outsiders. As with Wagner, it’s easy to imagine Nietzsche obsessed with West’s earlier work – the Dionysian id of My Beautiful Dark Twisted Fantasy and the assaulting, manic pessimism of Yeezus. And just as the philosopher abandoned his muse over Parsifal’s elevation of chastity, it is easy to imagine him equally disgusted by West’s conversion to Christianity.

Like it or not, Kanye is our Wagner – a master architect of pure spectacle and a man whose unhinged brilliance confronts us all.

Wagner and West are both obsessed with scale. Some will call DONDA too long, but I just call it large, like a wall you can’t figure out how to climb. The album begins by summoning its namesake, Kanye’s departed mother. For a record devoted to a powerful woman, it’s a disappointingly rare instance of the female voice. “Donda,” Syleena Johnson incants, “Donda Donda Donda… Don-da, Don-da,” over and over until a name, a person, becomes a rhythm. Kanye turns his mother’s memory into a pulse that sustains the record’s contemplation of his favorite subject: himself – his faith, insecurities, and personal predicaments.

And what a pulse it is. Donda bursts with momentum. Fans who lamented Jesus is King for its lack of thumping beats are rewarded with a treasure chest of classics. After the first five big songs – all heaters – I thought there’s no way he can keep this up. For the most part, he does. “Junya” managed to throw me around the room with nary a bass drum in sight. The song is about a wristwatch. “24” could have been recorded at the guys’ bible study. Kanye begs for the memory of his mother (“I know you’re alive, God’s not finished”) and his Sunday Service choir, intentionally blown and distorted, answers repeatedly, “We gonna be ok.” They sing like it’s a sure thing and have me convinced.

Wagner and West are both obsessed with scale. Some will call DONDA too long, but I just call it large, like a wall you can’t figure out how to climb.

But on top of social insensitivities, musical missteps lurk. Kanye “pays tribute” to Pop Smoke by slapping one of his verses over a kindergarten piano lesson. The various “part 2”s at the end are useless addenda. Usual instances of uniquely Kanye whiplash abound. He swings from a gonzo, left-field sample of Globglogabgalab into the beautiful “Moon,” a haunted meditation on wanting what you can’t have. “Keep My Spirit Alive,” ostensibly about his mom, is an opportunity for Westside Gunn to thank God for some drug deals. And Ye adds another cringey couplet to his arsenal when he raps, “Personal worth is not what a person is worth/I can give a dollar to every person on earth.” This is not true, but why are we counting?

The album art is just the color black, the color of grief. But with Kanye, nothing is private. And if black is the color of grief, it’s also the color of the cosmos and the color of his skin. West has a talent for passing fluidly from hyper-specific particulars to exalted universals. He feels comfortable, while rapping about the details of his divorce for instance, to drop lines like “Time and space is a luxury” and “I give up on doing things my way.” And musically speaking, Kanye’s maximalist and encyclopedic approach to production forbids passive listening. By laughing at the temptation to constantly deliver a cathartic drop, the whole thing feels bigger.

Which brings us back to Wagner, who famously built an entire opera (Tristan und Isolde) around the resolution of a single dissonance. One towering difference between the two artists is that Wagner never wrote himself onto the stage. With Kanye, there is a sense that he is the stage. He acts like his entire existence is an art project – think of the shoes, the Instagram, the gossip. Wagner would have been fascinated by this. I’d also wager that this is partially what allowed West to open himself to the Gospel. While Wagner, like the god of deists, stood at a distance from his own world, Kanye is immersed in it. God became the natural answer to his increasingly exposed insecurities.

While Wagner, like the god of deists, stood at a distance from his own world, Kanye is immersed in it. God became the natural answer to his increasingly exposed insecurities.

What of Kanye’s Christianity? Secular reviewers are bound to sneer at West’s faith and use it as an excuse to moralize his superficiality, but this is a mistake. DONDA is, at moments, mature Christian art – messy, conflicted, and full of baggage. When Ye released Jesus is King, the resounding choir of Christian critics questioned the authenticity of his conversion. We’ll see if he keeps it up, everyone seemed to say. Being a Christian is hard, you know. I’d like to sit with the eye-rollers while they spin “Jesus Lord,” the sprawling, 9-minute triptych that anchors the album’s backstretch. At once hypnotic and bracing, the track features a vulnerable Kanye, a virtuosic Jay Electronica, and a voicemail from Larry Hoover Jr., all wondering in their own way about forgiveness and the generations that keep passing by. All along, Kanye intones again and again, “Tell me if you know someone that needs Jesus, Lord.” I can think of a few, Ye. Maybe even the guys on your porch.

And I’d also like to see if the holier-than-thou tut-tutters’ eyes stay dry during the album’s climax, “Come to Life,” a sublime and fragile track about the ways we try to raise the dead. “I don’t wanna die alone/I don’t wanna die alone,” he repeats. A woman keeps crying out, “Hallelujah!” In what has to be the most touching moment in his entire catalog, pianos cascade and guitars growl while Kanye begs God for help and admits that all his daughter wants are Nikes, a brand he’s been beefing with for a decade. “This is not about me, God is still alive,” he sings. For virtually any other artist, this moment would seem grotesque. But for Kanye West, this confession is as personal as it gets. I may not be able to relate with the specifics, but I sure know what it’s like when someone I love wants something I hate.

Ye Is Risen: Welcome to the church of Kanye West
Brandon Sanchez

For my own part, I was moved at the end as he sang about his daughter and his God, repeating “He’s done miracles on me,” until the record blacked out. I couldn’t tell if the last track, “No Child Left Behind,” was referring to the education bill, the rapture, or his own kids, and I didn’t care. West is a reminder that we don’t only dwell politically or morally. We also dwell poetically and we can be moved by people who seem like a risk. Jewish composer and conductor Leonard Bernstein once said, “I hate Wagner, but I hate him on my knees.”

What is there to say about Kanye? Let the weirdo have his masterpieces. 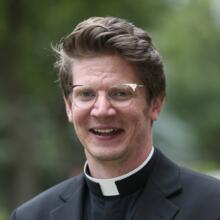 Matthew Zurcher, S.J. is a Jesuit scholastic. He is currently pursuing an MA in Social Philosophy at Loyola University Chicago.

@SaintDismas_
Provide feedback on this article
Join the conversation: Login or create an account
Before you can comment, you need to update your profile to include your first and last name, as required in our comments policy. Then reload this page and you'll be set up for commenting. Update your profile