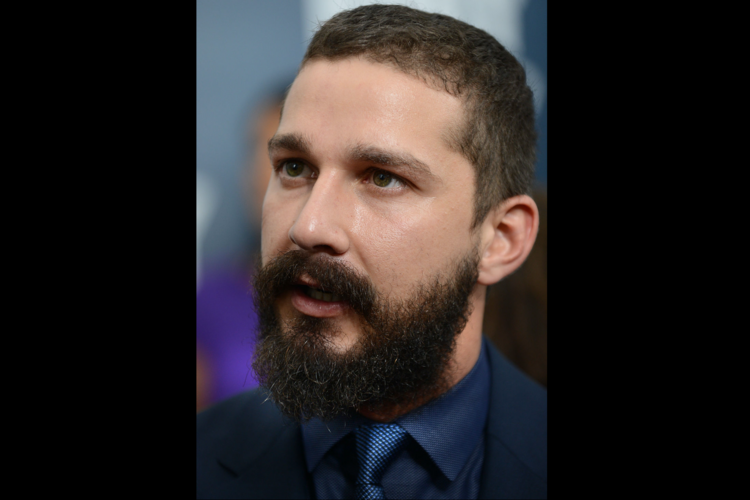 Shia LaBeouf at the premiere of “Fury” in 2014 (Wikimedia Commons)

VATICAN CITY (RNS) — Shia LaBeouf is known for going to extremes to prepare for his movie roles, scarring his face and having a tooth pulled to get in character. For the 2014 movie “Fury,” he reportedly refused to shower for weeks to imitate the deprivations of warfare.

But even LaBeouf was impressed by the life of a Capuchin monk.

“I’m completely immersed in something way bigger than myself,” LaBeouf said in an Instagram post published by Capuchin Friar Hai Ho last week.

LaBeouf spent a few days in mid-August embedded at a Capuchin monastery in Northern California to familiarize himself with Capuchin spiritual life as he prepares to star in a planned film biography of Padre Pio, the mystic Capuchin priest. A release date for the movie, the brainchild of indie director Abel Ferrara and co-starring Willem Dafoe, has not been announced.

LaBeouf spent a few days in mid-August embedded at a Capuchin monastery in Northern California to familiarize himself with Capuchin spiritual life.

Pio lived in Italy’s rugged Puglia region after World War I, when staggering poverty rates and the rising fascist movement shook the country and paved the way for the dictatorship of Benito Mussolini and Italy’s involvement in the Second World War.

Pio was cherished in Puglia for his charitable works but became renowned for the miracles he is said to have performed and for having received the stigmata: marks on his hands and feet resembling the wounds Christ is said to have suffered while being nailed on the cross. Pio inspired a deep devotional following globally, and especially in Italy.

Severely sanctioned by the church in his lifetime, Pio, who died in 1968 at age 81, was at times prohibited from preaching and performing the sacraments. But before Pio’s death, St. Paul VI dismissed all accusations against him, and in 2002 St. John Paul II declared him a saint.

Pio was cherished in Puglia for his charitable works but became renowned for the miracles he is said to have performed and for having received the stigmata.

Pope Francis had Pio’s remains brought to Rome during the Jubilee of Mercy in 2015-2016, attracting massive crowds to the Vatican. To mark the 50 anniversary of Pio’s death, Francis visited the southern Italian towns of Pietrelcina and San Giovanni Rotondo, where the friar lived and preached, and described him as an “apostle of the confessional.”

Sporting long hair and a rugged beard reminiscent of Padre Pio’s signature look, LaBeouf said in the Instagram post: “I don’t know if I’ve ever met a group of men as immersed in anything in my life. It’s super attractive to see people completely give themselves to something so divine. It’s heartwarming to know that there’s a brotherhood like this that exists.”

Capuchin Franciscans, whose order was founded in 1525, inhabit the lifestyle and message of St. Francis of Assisi, taking vows of chastity, poverty and obedience.

LaBeouf: “I don’t know if I’ve ever met a group of men as immersed in anything in my life. It’s super attractive to see people completely give themselves to something so divine.”

“Although we take time to pray throughout each day, our prayer life, such as the Liturgy of the Hours, a holy hour of adoration before the Blessed Sacrament, or the rosary helps us remain in a relationship with our Lord and fulfill our ministries, such as listening to confessions or bringing Holy Communion to the sick,” one friar who spent time with LaBeouf last week told Religion News Service.

The friar said that they shared their lifestyle and community experience with the actor, who was seeking to prepare for the role of Padre Pio in order to help him portray “life as a friar in the most accurate way possible.”

Focusing solely on the ascetic aspects of Padre Pio’s life would be missing the greater picture, according to the friar. An essential aspect of Padre Pio’s life, the friar explained, was the way “faithful can connect with him, because he is relatable.”

LaBeouf said on social media that he’d “been met with nothing but grace” and had learned about the Capuchins’, and Pio’s, relationship to God.

“When making a movie about Padre Pio, it is important to show that he was human. He was a brother among brothers of his religious community. His level of personal holiness was great,” he said. “However, he was also a brother to share jokes or go for a walk.”

LaBeouf said on social media that he’d “been met with nothing but grace” and had learned about the Capuchins’, and Pio’s, relationship to God.

“We’re trying to get as close to the accurate depiction of what it’s like to be a friar as possible and try to get as close to like the human, tangible, tactile, relationship that this man had with Christ and bring the Good News to the world,” LaBeouf said.

LaBeouf, who comes from a mixed Jewish and Christian household, told Interview magazine that he “found God” while making “Fury.” Ferrara, raised Catholic, converted to Buddhism in 2007 but has borrowed generously from his religious background in his past movies.