Is cursive dead? Not for this Catholic school 5th grader 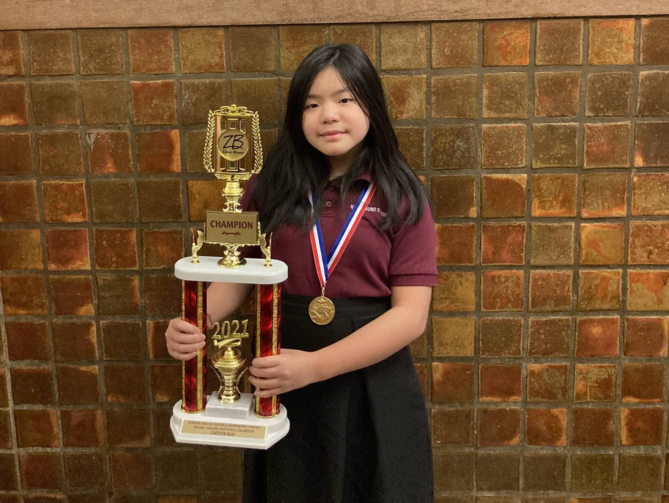 Caitlyn Ngo of St. Edmund’s Catholic School displays the trophy she was awarded upon being selected as the 5th Grade National Champion in the Zaner Bloser 2021 National Handwriting Contest. (Photo courtesy of the Diocese of Brooklyn)

Fifth-grader Caitlyn Ngo wants to be a doctor when she grows up, and if she follows through with those plans, she may finally put to rest the idea that all physicians have terrible penmanship.

Caitlyn, a student at St. Edmund’s Catholic Academy in Brooklyn, N.Y., was recently crowned the Fifth Grade Grand National Champion in the 2021 Zaner-Bloser National Handwriting Contest, an annual competition that has had more than two million student participants over the last three decades.

The day of the contest, Caitlyn and her classmates were asked to write—in cursive—a sentence that contains every letter of the English alphabet: “The quick brown fox jumps over the lazy dog.” Each school can submit one contestant’s penmanship per grade; Caitlyn’s entry was selected from her fifth grade class.

Fifth-grader Caitlyn Ngo wants to be a doctor when she grows up, and if she follows through with those plans, she may finally put to rest the idea that all physicians have terrible penmanship.

Caitlyn, who said her favorite subjects are math and science, said she geared up for the competition by using her handwriting book—copying down sentences describing facts about the world’s oceans, for example. Plus there was help from home. “When I was little, I practiced with my mom,” Caitlyn told America.

According to Zaner-Bloser, the penmanship school turned education company that sponsors the contest, each entry is judged on shape, size, spacing and slant. About 75,000 students entered this year’s contest, with grades K through two submitting printed entries and three through eight showing off their best cursive. Winners receive a trophy, a $500 prize and a voucher for educational materials for their schools.

When her principal, Andrea D’Emic, told her she had won the nationwide fifth grade contest, Caitlyn said she was “really shocked.”

Ms. D’Emic, who has led St. Edmund’s for four years, said that depending on their ages, students are encouraged to practice their handwriting through penmanship exercises, journaling and everyday homework assignments. Though the school recognizes that much of life now takes place online and gives students plenty of practice with technology—especially during the early days of the pandemic—she said there is value in learning proper handwriting. Some students, she said, tell her they prefer taking notes by hand because of the relative speed.

At least one study suggests that taking notes by hand, rather than typing them on a laptop, may be better when it comes to retaining information.

“By offering such a wide variety for our students, we are preparing them for the future,” Ms. D’Emic said.

In this year’s contest, at least three other students from Catholic schools won national recognition in the contest: Soldae Givens, an eighth-grader at St. Benedict the Moor School in Pittsburgh, Pa.; Ethan Higgins, a student at St. Edward School in Ashland, Ohio; and Rhys Acas, a kindergarten student at St. Thomas More Catholic School in Elgin, Ill.

“I like being the champion,” Rhys told the Daily Herald, describing how it felt to win his first trophy. The kindergartener said he plans to put his $500 prize in his piggy bank, which is currently filled with pennies and a few dollar bills.

“We have found that Catholic schools and Catholic school parents really put a high level of importance on foundational skills for their students,” Lisa Carmona said.

“We have found that Catholic schools and Catholic school parents really put a high level of importance on foundational skills for their students,” she said, stressing that handwriting is one of these skills that is important for reading, writing and language.

The ability to write by hand is a life skill, she added, especially in this digital age.

Ms. Carmona also said the talent is a form of artistic expression noting that “when children struggle to express themselves and find their voice, handwriting gives them an outlet.” She sees this in the answers students give in their contest entries; many say it is an art form and a way to express themselves.

As for fifth grade champion Caitlyn, she likes seeing how her writing improves over time. “I like handwriting because everytime you practice, you write faster,” she said. Not only that, she added, “It’s really fun when you have nothing else to do.”