This morning she came undone into my arthritic fingers
in the form of an easy tear perforation on the milk carton,
that was a very small kind of mother, smaller than the mother
I encountered in myself, waiving late fees working at the library
when the nursing student in finals week eating Oreos
for dinner came begging, no fret, I said, my register lackluster
compared to the mother I found in the purposeful banter
the buck-toothed guy in 12B on LHR-BOM engaged me in
to distract me from pain, cramps coiling under my knees,
every nerve sharp as teeth—grinding down a prayer
for the prednisone to usher in, the pill also a mother, dissolving
my aches invisible as the grace I trace in the blanks
between my friend’s fingers chopping walnuts cooking me
aji da gallina, seasoning the chicken with mother-
like accuracy, the sense of her knowing I have long been
motherless itself a mother to me, a gold virgin mary
on her pointer, how it birthed rainbows in the sun-drenched
women’s clinic as we waited for her to get an IUD, an option
our mothers would perhaps unapprove of, and this option
too, a kind of mother. And the ghost of my own mother
my father conjures pointing to the corner table in Kailash Parbat,
a restaurant by a cowshed where they first met, sipping
filter coffee amid bovine groans, chaperones at arm's length
and it is hard to not be amused when my father, now motherless
and wifeless, having brought doctors and priests to both women
in vain, still finds it in him to be a mother to himself—wide-
grinned, he whistles combing his balding head before bed,
ask him why and he’ll say, what if Julia Roberts comes
in my dreams tonight, what is to mother if not to suspend
moonlike faith in the face of a stubborn night like the milky
plainness with which my stepmother confided in me
while shelling peas—your father, he hit me—her admission
not only because it is a transference of trust but also
a repeating of history, making her more my mother
than I allowed her to be—her, who I thought a linear erasure
of my one mother, now my mother’s kin, the two sharing a skin-
memory, look, how she pendulums her feet at the sewing machine,
altering a paisley dress for me, says, try it now. And I try,
mother, to have you returned to me, in flesh and in breath,
to keep you alive.

“Raising Mothers” by Preeti Vangani was selected out of more than 1,200 entries to this year’s Foley Poetry contest. The three runner-up poems, to appear in subsequent issues of America, are “Baby Mania,” by Taylor Byas, “P.OT.S. Prayer,” by Jessica Jacobs and “A message after the beep,” by Susan Vickerman. Special thanks to Brendan Walsh, the 2020 contest winner, and the Joseph A. O’Hare fellow Erika Rasmussen for serving with me as judges. 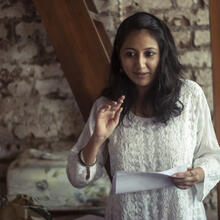 Preeti Vangani is the author of Mother Tongue Apologize, winner of the RL Poetry Prize. Her work has been published in BOAAT, Gulf Coast, Threepenny Review and elsewhere. She is the poetry editor for Glass: A Journal of Poetry. She has an M.F.A. from the University of San Francisco.

@Pscripturient
Show Comments ()
Join the conversation: Login or create an account
Before you can comment, you need to update your profile to include your first and last name, as required in our comments policy. Then reload this page and you'll be set up for commenting. Update your profile