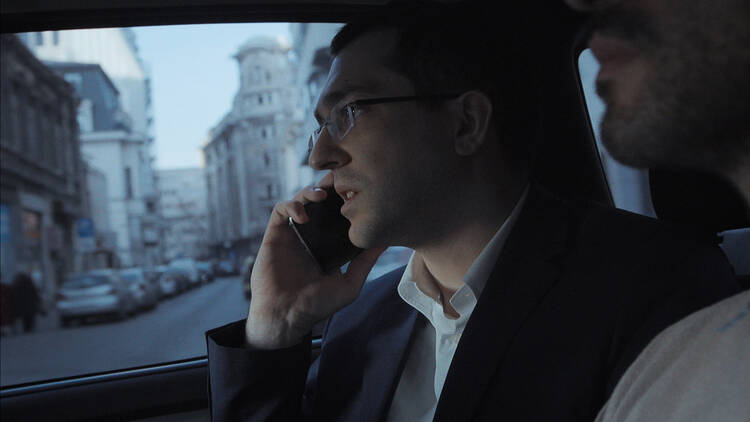 The 2020 nominees for the Academy Award for Best Documentary Feature showcase a wide array of topics, from the injustices of incarceration to the blossoming friendship between a man and an octopus. Here are the contenders.

Time (Amazon Prime). On Sept. 16, 1997, Robert G. Richardson and his wife, Sibil Fox, co-owners of a now-defunct hip-hop clothing shop in Shreveport, La., committed armed robbery at a Louisiana credit union and unwittingly initiated a protracted and painful battle against the state’s criminal justice system. Richardson’s wife, nicknamed Fox Rich, was sentenced to 13 years prison for driving her husband to the bank, but she accepted a plea deal which reduced her time behind bars. (She served three-and-half years in total.) Her husband, Rob, refused a deal and received an undoubtedly excessive, devastating sentence: 60 years at the Louisiana State Penitentiary.

Shot in black-and-white utilizing mostly hand-held cameras, Garrett Bradley’s formally daring and startlingly personal film “Time” follows Fox Rich as she seeks the release of her husband while raising three sons on her own. At times reminiscent of the low-budget aesthetic that informs “Killer of Sheep”—Charles Burnett’s entrancing portrait of Watts, Los Angeles, in the late 1970s—“Time” is interspersed with grainy, VHS-quality footage culled from 100 hours of Richardson family home movies.

“Time” is not a staid, plodding bore akin to a college ethics lecture.

While the film asks difficult questions about the widespread incarceration and extreme sentencing of Black citizens in the United States, “Time” is not a staid, plodding bore akin to a college ethics lecture. The film, accompanied by a jazzy piano score, floats freely between past and present to illustrate the void that Rob’s imprisonment left in the life of one family, which, after 20 years, refuses to surrender hope to world-weary cynicism.

“Time” is aptly named, as the film surely benefits from the highly charged climate in which it premiered, a period of racial reckoning in America spurred by the brutal murder of George Floyd and the repeated use of execessive force by law enforcement. Without resorting to maudlin sentimentality or a rose-colored fantasy about race relations in the United States, Bradley’s film concludes on a hopeful note that the long arc of the moral universe may truly bend towards justice—at least when faced with the steadfast resilience of Fox Rich.

Collective (Hulu). Joining the ranks of great films about investigative journalism, “Collective,” the first Romanian film nominated for any Academy Award, is a jaw-dropping and often infuriating exposé on rampant government corruption and criminal failure in the Romanian hospital system. Directed by Alexander Nanau, the film places the viewer with a group of sports journalists, led by Catalin Tolontan, as they probe the deaths of nearly 40 hospitalized burn victims in the days after the 2015 Colectiv nightclub fire.

The investigation concludes that over 2,000 Romanian hospitals knowingly used heavily diluted disinfectants that allowed for the growth of lethal pyocyanic bacteria and endangered the lives of patients injured in the Bucharest fire. Some disinfectants were diluted up to 10 times more than recommended. It was further revealed that the Romanian Intelligence Service sent 115 briefings on hospital infections and substandard biocides to various government officials between 2011 and 2016.

“Collective” is a jaw-dropping and often infuriating exposé on rampant government corruption in the Romanian hospital system.

By May 2016, the hospital infection rate in Romania was the highest in the European Union, with an estimated death toll of at least 12,000 per year. The ICU mortality rate rose to 90 percent.

In “Collective,” the Romanian government faces a growing crisis as press reports lay bare a hospital system held hostage to bribery, forged certificates and political influences. The findings prompt mass outrage and the resignation of Patriciu Achimas-Cadariu, the minister of health. “The best investigations are made by a sport daily!” shouts one demonstrator during a protest against government corruption. “That’s the state of our press!”

An invaluable portrait of good journalism in action, “Collective” plays like a slow-burn thriller where every minute reveals an unsettling truth. Tolontan, the film’s lead journalist, is an unlikely hero—an unassuming, middle-aged reporter who spends hours a day at a cluttered desk strewn with loose papers, headphones and an icon of Virgin Mary with the Child Jesus. “You came across a nest of unscrupulous mobsters,” an intelligence officer warns Tolontan. But he and his team of reporters remain undeterred even in the face of such vague threats.

The Mole Agent (Hulu). An unlikely reimagining of the spy film genre, “The Mole Agent” substitutes the seasoned intelligence officer George Smiley with Sergio Chamy, an 83-year-old Chilean widower with no espionage experience and few technological skills. (He does not know how to use FaceTime, for example.) After replying to a newspaper ad seeking elderly men, Chamy is selected by a private investigator to pose as a new resident of a nursing home in Santiago’s El Monte district. The mission? To investigate signs of negligence or abuse at the home, particularly with regard to Sonia Perez, whose daughter claims is the victim of mistreatment.

Searching for a distraction from the death of his wife, Chamy is an eager participant in this bizarre undercover operation. The besuited Chamy becomes a big hit at the nursing home, because whatever he lacks in investigative experience he makes up for in natural charm. The women like him because he looks “gentlemanly” and “lucid”; one particularly energetic resident falls in love with him and dreams of marriage. In little time, Chamy’s daily reports to Romulo, the private eye, begin to veer off track from investigating the treatment of Sonia Perez into rambling diary entries about life (and food) at the home. “I was elected king of the nursing home,” says Chamy in one report.

“The Mole Agent” prepares you for one thing and instead delivers something much more life-affirming and even joyous.

Directed by Maite Alberdi, “The Mole Agent” prepares you for one thing—an examination of elder abuse at a South American nursing home—and instead delivers something much more life-affirming and even joyous. Chamy finds no evidence of abuse at the home, but rather notes its strong sense of community in the face of the great loneliness suffered by many residents. “Loneliness is the worst thing about this place,” says Chamy.

Quirky and endearing, “The Mole Agent” is structured less like a documentary and more like a narrative picture, where Chamy’s budding relationships with people often forgotten or ignored form the emotional core of the film.

Crip Camp: A Disability Revolution (Netflix). A look at the dawning of the disabilities rights movement that led to the passage of national accessibility laws, “Crip Camp,” produced by former President Barack Obama and his wife Michelle, brings to light the untold story of Camp Jened in the 1970s. The now-defunct camp, once nestled in the Catskills Mountains of southeastern New York and run by hippie counselors, provided a summer retreat for disabled adults and the rare chance to form relationships (both platonic and sometimes sexual) with other campers. It maintains an august legacy as the utopian springboard of modern disability activism.

As evidenced by the title, “Crip Camp,” directed by Nicole Newnham and James LeBrecht, is often irreverent, occasionally bawdy and utterly life-affirming. The film profiles several ex-Jenedians, including LeBrecht and the Obama administration special advisor Judith E. Heumann, and their formation of Disabled in Action of Metropolitan New York, a civil rights group that mounted numerous nonviolent protests that helped lead to the 1990 passage of the Americans with Disabilities Act.

The centerpiece of the film is a 1977 sit-in where more than 100 disabled activists occupy the San Francisco offices of the former Department of Health, Education and Welfare for 25 consecutive days. The action pushes then-H.E.W. Secretary Joseph A. Califano Jr. to sign regulations banning discrimination against the disabled, thereby enforcing the terms of the Nixon-era Rehabilitation Act. “Crip Camp” is a strong contender for the year’s best documentary, bringing to the forefront a little-known story of dogged persistence and hard-won victories for disabled Americans.

My Octopus Teacher (Netflix). You don’t often come across a deeply moving, 85-minute portrait of the enduring bond between a South African naturalist and a common octopus. Directed by Pippa Ehrlich and James Reed, “My Octopus Teacher” follows the filmmaker and skin diving enthusiast Craig Foster on his voyage of discovery in an underwater kelp forest off the coast of Cape Town, South Africa. The film is a showcase for stunningly clear underwater photography that gives David Attenborough nature docs a run for their money.

After becoming fixated on the daily life of a female octopus, Foster visits her every day for a year until her eventual death—a strangely affecting moment caught on camera that blurs the line between humanity and the animal kingdom. As Foster grows in fondness for his octopus friend, so does the viewer, who may be surprised to find themself completely invested in the well-being of an invertebrate mollusk.

But it is Foster’s deep respect for the natural world—from exotic deep-sea flora to predatory pyjama sharks—that is ultimately contagious and a timely call to safeguard what Pope Francis calls “our common home.”