Finished Laudato Si’? Now watch, read and listen to this. 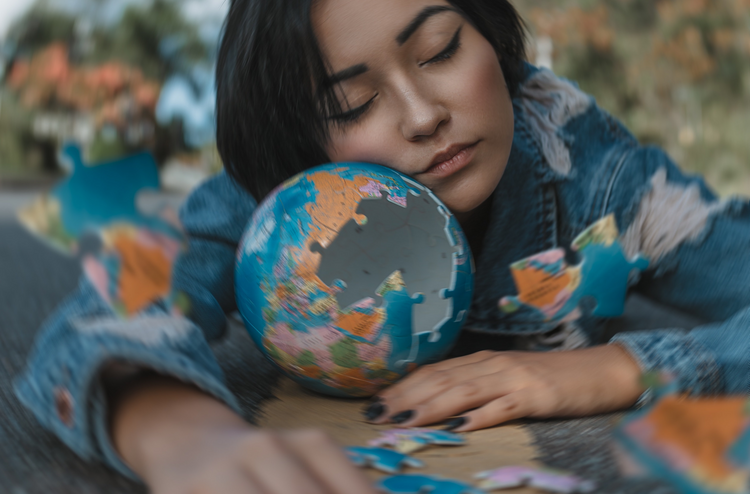 Six years ago, Pope Francis’ urged the people of God in his encyclical letter “Laudato Si’’’ to cultivate a new and sustainable relationship with the Earth and our neighbor. Today, we as humanity continues on an ecologically devastating path, deep into a climate crisis that will only worsen as we maintain the systems and practices held in place by an economy perpetuated by excess and disregard for environmental degradation. Artists, writers and thinkers have always kept an eye on what is not right with the world and have long been carrying forward a tradition that lives in loving relationship with the rest of creation. Here are our recommendations for literature, music, podcasts and art to further deepen your own loving relationship with God’s magnificent, interconnected creation.

“The Tree of Life”
This beautiful, profound and sometimes trippy film, released in 2011 by one of the great American filmmakers, Terrence Malick, is a meditation on the origin of life. It also includes some of Malick’s most impressive images of the natural world. It is hard to come away from this film not appreciating God’s creation and creative power.
- James Martin, S.J., editor at large

“My Octopus Teacher”
At the beginning of Craig Foster’s filmmaking career, he encountered master game trackers in Botswana, and sensed his own alienation from the rest of creation: “They were inside of the natural world. And I could feel I was outside.” Eighteen years later, he encountered a wild octopus in the depths of a South African kelp forest. This exquisite creature led him, tentacle to hand, into friendship, helping him to understand the intelligence and interconnectedness of the kelp forest. “She was teaching me to become sensitized to the other.” Let her do the same for you. - Erika Rasmussen

“The True Cost”
Clicking “add to cart” or pulling any piece of clothing off of any store’s racks has become far too thoughtless. The truth is, everything you buy, and maybe everything you do, now has an impact on local or global ecosystems—including the clothes on your back. This documentary reveals the real price we are paying for “fast fashion,” from the soil to the factory to the closet. Spoiler: it’s not pretty, and as a creation-loving person, you will want to shop differently. - E.R.

The Overstory, by Richard Powers
A masterwork of intersecting stories that affirm the holiness of life. You will find yourself interrogated and implicated in every single character, incarnate through flesh and metaphor, and you will fall in love with trees. You will understand something more about being alive, you will understand something more about living in love and you will find yourself in unity with the rest of creation. Reading this book is an act of cultivating a deeper relationship with God and our planet. - E.R.

Solar Storms, by Linda Hogan
Read this to expand your love for our common home and family. Come alive in poetic prose that stuns. A young teenage girl in the foster system finds her way back to women relatives with indigenous roots. These extraordinary women teach her to be in relationship with the land—and the water—that gives life, and to fight for its protection. - E.R.

Ask the Beasts, by Elizabeth Johnson
One of the most important theologians of our time, Elizabeth A. Johnson, C.S.J., expands the reach of the Gospel message to enfold all of creation in Ask the Beasts. Dr. Johnson writes, “Interpreting the gospels with contemporary ecological concern prompts the question of whether the ‘good news’ might include the land and its other-than-human creatures.” Indeed, Dr. Johnson reminds us that God’s love is for the whole of creation, and that Jesus’ ministry reveals that the flourishing of all life—not just human life—“is God’s original and ultimate intent.” - E.R.

Elizabeth A. Johnson, C.S.J., expands the reach of the Gospel message to enfold all of creation.

Black Nature, edited by Camille T. Dungy
Revel in over 250 years of stunning poetry for the Earth written by Black authors, including Phillis Wheatley, Gwendolyn Brooks and Major Jackson. "If we look at history and say, well, Black people can only write about the natural world and think about slavery or think about being a runaway, you forget that other component—that there has always been promise and survival in the natural world,” Camille T. Dungy told NPR in 2010 after the book was published. “That some people knew where to look and how to look. And so that is as much a part of these poems: the hope and the potential for a real connection and collaboration, as much as this devastating and horrible history, is there.” - E.R.

When the Trees Say Nothing: Writings on Nature, by Thomas Merton
The first section of this book is broken down by seasons and it is something very special to meditate on autumn while you’re in autumn or to say goodbye to winter as the season ends. This is a must-read for fans of Thomas Merton or those who want to spend more time contemplating the natural world but don’t really know how to start. As the Passionist priest Thomas Berry writes in the introduction, “Everywhere we find ourselves invaded by the world of the sacred.” This book is an invitation to to spend as much time as you want in the sacredness of creation. - Vivian Cabrera, assistant editor

“Fall on Me” and “Cuyahoga,” by REM on “Life’s Rich Pageant”
In “Fall on Me,” REM’s jangling guitars and Michael Stipe’s poignant yearning voice lift up a song that considers the sky as a commodity that could one day collapse on us all. ”Cuyahoga” is at turns quiet, piercing and desperate, inspired by the grotesque phenomenon of a river so polluted with industrial waste it literally caught fire 13 times, most notably in June of 1969. (CODA: fifty years later, after years of extensive clean-up, the Cuyahoga was named “River of the Year” by the group American Rivers.)
- Joe Hoover, S.J., poetry editor

Supaman
The music of this Apsáalooke rapper and fancy dancer tackles life as he knows it. Christian Parrish Takes The Gun, known as Supaman, rhymes and sifts through life on the reservation, his own upbringing and the injustices he sees in our world. Shortly after an encounter with Christ in a hotel nightstand Bible, Supaman promised: “I’m yours, Creator. I give you my life. I give you everything. I give you these talents, and this vision and desire for rap. You want me to rap for a million people? I will, and I’ll tell them about your love.” One way he does this? Praying for water rights in the song and music video “Miracle”: “Light up this prayer grass in my hand/ Take it to the most high/ We need a blessing tonight/ Stand by our side, side as we fight/ Screaming out ‘water is life!’” - E.R.

Everything in creation, God-made or man-made, breathes together.

“How to Save a Planet”
This podcast’s slogan is: “Earthlings, we’ve got work to do.” Get educated on the climate crisis and what we can and must do—as individuals and a collective. Dive into an ecologically focused topic each week with marine biologist and conservation strategist Dr. Ayana Elizabeth Johnson and journalist Alex Blumberg, where you will find some answers to questions like: Do my individual actions make a difference? How much does the president matter for the climate? How screwed are we? - E.R.

“Investing in Zero”
This brand new podcast hosted by entrepreneur and investor Andy Vesey released its first episode in April. “Investing in Zero” will focus on how to change the fossil-fuel economy into one that is carbon neutral. The first guest was David Callaway, who held senior positions as an editor at “CBS MarketWatch,” was editor in chief of USA Today and C.E.O. of TheStreet Inc. before founding his own digital newsletter that covers the intersection of finance and the climate crisis. The good news: People are actually making money in companies that are ecologically minded or actively addressing environmental issues. - E. R.

Photography by Tacanation
Tacanation’s black and white photography features the shapes and scenes of a life lived in the city—particularly images of San Francisco—where human civilization meets nature in breathtaking detail. Whether it is mushrooms climbing up out of a balcony pot, an engine merged with a human profile made of cypress, or children climbing a tree that is transposed in a mother’s mind, her work summons forth a vision of reality where everything in creation, God-made or man-made, breathes together. - E. R.

Drawings and illustrations by Brittni Paul

This Bay Area artist uses pen and paint to bring wildlife and habitat into vivid life. Consider her ink portrait of a frightened baby mountain gorilla sitting atop tree rings, the gorilla’s endangered population now just over 1,000 in the wild. In her “Living Ghosts” exhibition, Paul created a massive illustration of a coral reef, titled “Great Human Barrier,” which highlights the beauty and sacred life beneath the surface of the ocean that is at risk because of destructive human practices. Perhaps the reef is also a barrier to certain figures in capitalism who would like to carry on exactly as they are, without restrictions to protect the environment. - E.R.

Artwork by Ksenia Salion
In New York City, neon lights aren’t often used as a means of environmental activism. But Ksenia Salion creates immersive pieces that project images with ecological awareness and alarm onto walls and carefully chosen objects. “Truly I am the ocean and the ocean is me!” the artist writes about her blue piece that lays a swimming whale over a person’s face, where the veins or nervous system look like coral. “THIS PLANET CANNOT SUSTAIN THIS SYSTEM” another piece reads, printed across cardboard Amazon boxes; disquieting hues of red and green ripple and give warning. Looking at these pieces online, even if not experiencing them in person, can serve as a meditative experience that further connects one with the suffering Earth. - E. R.

Erika Rasmussen
@erika_razzerasmussen@americamedia.org
Show Comments ()
Join the conversation: Login or create an account
Before you can comment, you need to update your profile to include your first and last name, as required in our comments policy. Then reload this page and you'll be set up for commenting. Update your profile