Sacha Baron Cohen searches for America. Don’t be shocked by what he finds. 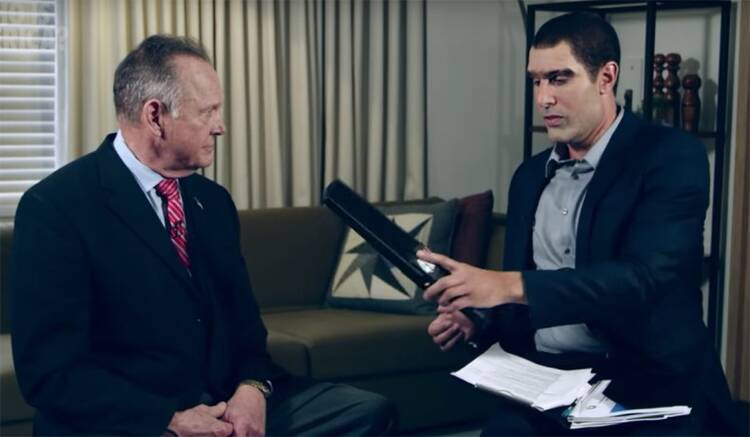 “Shock is just another uptown word for surprise,” George Carlin declared in a 2005 documentary about comedy. “Granted it has a different quality to it, but a joke is about surprising someone.” By that definition, Sacha Baron Cohen proved himself a master of surprise with HBO’s “Da Ali G Show”(2003) and his feature film “Borat” (2006). Both were brilliant mixtures of satire, slapstick and social commentary constructed out of deeply uncomfortable interactions between Cohen’s ridiculous characters and an unsuspecting cast of politicians, celebrities and average citizens. His subsequent movies largely failed to build on the promise of those earlier efforts, but with Showtime’s “Who Is America?” he has returned to his roots in episodic television, playing multiple characters and using the controversial guerilla-style filmmaking methods that first brought him fame—or infamy, depending on who you ask.

As an agent provocateur, Cohen’s new show had an impact before it even aired. Both Sarah Palin and the former Alabama Senate candidate Roy Moore denounced Cohen publicly for duping them. Moore even threatened potential legal action regarding a segment in which he repeatedly sets off a fictitious pedophile alarm developed by the Israeli military. Moore’s episode aired on July 29 and can be seen here. Palin’s interview had not yet aired by the time of this writing.

As an agent provocateur, Cohen’s new show had an impact before it even aired.

The consequences for Georgia State Representative Jason Spencer’s appearance were much more immediate. The Republican lawmaker, who had supported a proposed “burqa ban”in his state, was forced to resign after he repeatedly used the “n-word” and exposed his buttocks during a segment with Cohen disguised as Col. Erran Morad, an Israeli anti-terrorism expert.

Creating an all-too-predictable sociopolitical Rorschach test, voices from across the spectrum have projected their own biases onto “Who Is America?” Some critics have bemoaned that in Trump’s America there is nothing funny—or healing—about exposing so much toxic ignorance and prejudice in our polarized society. At the same time, conservatives contend that media elites like Cohen love nothing more than to mock traditional American values.

The reality is more complex.

As Dr. Nira Cain-N’Degeocello—a self-described “cis-gendered, white, heterosexual male, for which I apologize”—Cohen has crafted a brilliant and hilarious send-up of liberal stereotypes and orthodoxies. It is the best character he has created since Borat and, much like his Kazakhstani counterpart, Dr. Nira’s earnest cluelessness generates laugh-out-loud moments when he encounters the unfailingly polite and welcoming conservatives with whom he is trying to “Heal the Divide.”

Cohen’s legendary ability to mine discomfort, outrageousness and even offensiveness for comedic effect was on full display well over a decade ago. A 2004 segment caused controversy on all sides when Borat led an Arizona barroom in a sing-along version of a song he wrote containing the chorus “throw the Jew down the well, so my country can be free.” Two years later, Christopher Hitchens argued that the truth about Borat’s “cultural learnings” was not that Americans are racists but that we are “almost pedantic in [our] hospitality and politesse.”

“Who Is America?” takes place in a post-taboo age where shamelessness has become a virtue.

As unsettling as the sight of people laughing and singing along to such anti-Semitic sentiments is, it is also a bit of Andy-Kaufman-esque performance art that makes it difficult to distinguish whether the audience agrees with the sentiment or if they are just placating the surreal but well-meaning foreigner in their midst.

The truth is that 2004 was a time in which cultural taboos actually still seemed to exist. “Who Is America?” takes place in a post-taboo age where shamelessness has become a virtue. How else to explain how Cohen got current and former Republican lawmakers to go on camera in support of a fictional Israeli gun program called KinderGuardians? The program purports to train children ages 3 to 16 in the use of firearms and mortars. Somehow those facts did not deter enthusiastic lawmakers and lobbyists who were all too willing to gleefully sing its praises. “In less than a month, a first grader can become a first grenader,” the former Illinois Congressman Joe Walsh optimistically says to the camera.

“I support the kinder-guardians program,” former Senate Majority Leader Trent Lott states in his endorsement. “We, in America, would be wise to implement it, too. It’s something that we should think about, America, about putting guns in the hands of law-abiding citizens…good guys, whether they be teachers, or whether they actually be talented children or highly trained preschoolers.”

What is the appropriate reaction to such insanity? Humor can be a powerful weapon and laughter can be an effective coping mechanism in a world turned upside down. But it is difficult not to see such episodes as confirming that we are also in a post-language moment where words don’t matter and what we say has been rendered meaningless and utterly disconnected from any sense of a shared, coherent and lived reality.

That is the dark joke at the core of who America is now.

I have watched several of these episodes and find it unbelievable that people would do and say what they did on film.

Couldn’t agree more, Lisa. What politician worth their salt would just read such insanity off a TelePrompTer?!

Couldn’t agree more, Lisa. What politician worth their salt would just read such insanity off a TelePrompTer?!

Is there an America anymore?

There is a physical place but with the destroying of the culture there is no America as a country. Surprise!!!

Can you clarify what you mean about the destroying of the culture?

Look at what is taught in the university? It's an open attempt to destroy what was known as Western Civilization? I suggest you read Jonah Goldberg's new book., the Suicide of the West. Add The Strange Death of Europe. There's an open positive discussion of socialism everywhere. Add the collapse of religion. Yes, the culture is gone.

I'm surprised you have to ask. Read about Amy Wax and what she said and then what happened to her. Not a peep of this phenomenon in America, the magazine. Instead we get Sacha Baron Cohen.

I wouldn't say it's a disappearance of culture as much as the constant overturning of mores due to relentless technical innovation. The Amish are careful about introducing technology and how it might impact their society. With the larger society, it's anything for a buck. People spend money for in vitro fertilization so people make money on in vitro fertilization, including sperm banks. Next stop, gene editing. Financial security for the average person is a thing of the past. Any semblance of a covenant between employers and employees is gone. Culture is a glue that holds people together. We have been taught by neoliberal dogma that we are rugged individualists. So now instead of any organic wholeness, we are a gas of individuals.

due to relentless technical innovation

Probably the most innovative period in human history in terms of changing one's life took place 1865-1965. In the first half of 20th century Schumpeter described the phenomena of creative destruction. What is happening now is the destruction of culture with no positive replacement. Technology accelerates this destruction and certainly is not helping but the basic cause lies elsewhere.

"So now instead of any organic wholeness, we are a gas of individuals." I like the way you put that Stanley.

I think he's great; he shows just how gullible and manipulated Americans can be. Even in discussing the training toddlers to shoot video, someone on NPR expressed the belief that the outrage was to train toddlers in the US to shoot, but that for Israel it is done and it makes sense! This was accepted as perfectly appropriate. So that was the joke; they were talking about American not Israeli toddlers! Cohen showed us how when it comes to Israel ,we are so brainwashed that we who profess to believe in equality and dignity of all people, will resort to dehumanization[n word], and suspension of judgment [ train toddlers] in our eagerness to jump through any hoops to show our love for Israel.

Frankly I think your view of "how gullible and manipulated Americans can be" perfectly meshes with Cohen's consistent efforts to dehumanize conservative Americans. I've had enough of the divisiveness, haven't you?

As I mentioned in the piece, actually there are multiple characters he plays and with the Dr. Nira character (stereotypical liberal) conservatives come out looking incredibly sane and open minded. In terms of “dehumanizing conservatives” it’s difficult to defend elected public officials as victims who have willingly endorsed on camera a program to arm preschoolers. These aren’t naive people being duped and dehumanized. They are lawmakers and lobbyists who seem to have sacrificed all common sense in the name of partisan ideology.

Really? Liberals and conservatives alike, there is no shortage of hypocrites in this world. And somwhow we are surprised.

"As an agent provocateur, Cohen’s new show had an impact ..." I know it's August, but really, can we watch the misplaced modifiers please?

This piece is so poorly conceived and written I'm astonished to find it on America.

I find value in creative humor used to point out foibles in contemporary society. I find this article well conceived and well written. I really doubt the author expects everyone to agree with him. Suggest you argue on the ideas, not on whether or not America should have published the article. I tip my hat to America for sharing this article.

Thanks H. Thomas. Woe is the author who expects everyone to agree with him... ;)

From the funniest man of all time

Nothing has changed in 75 years

I wacthed many episodes of it on < ahref="https://terrariumtvpro.com/terrarium-tv-for-pc/">terrarium tv for pc