She was Paris’s most famous courtesan. Then she found God. 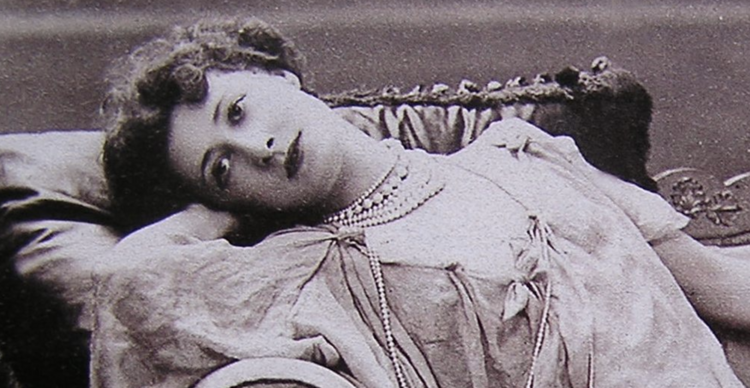 One of the best spiritual books I have read this year is mostly gossip.

Liane de Pougy was born in 1869 as Anne-Marie Chassaigne in a provincial French town, but she longed early for the high life. She married young (and pregnant) but fled her unhappy marriage, leaving her son Marc with her husband. She changed her name, got a job dancing at the Folies Bergère and quickly became the most famous courtesan of the fin-de-siècle—another Helen, conquering a different Paris.

For Lianon (as she called herself), life was a banquet, and she took seconds of every dish. Men poured jewels in her lap and women threw themselves at her feet—de Pougy’s 1901 novel, Idylle Saphique, is a roman à clef about her affair with Natalie Barney, then the empress of lesbian Paris. At last she was swept away from the glittering world in the only manner that could have been more glamorous than her immorality: Prince Georges Ghika of Romania married her, winning the prize so many men had sought and changing her name yet again—to Princess Ghika.

By 1919, when de Pougy started to keep the diaries that became My Blue Notebooks, the height of her fame had passed. De Pougy’s diaries are full of drama and scandal, swirling gowns and opium dealers; but another note is creeping in. De Pougy writes with élan about her friends, her lovers and her foes (who are often also friends and lovers). But these anecdotes are punctuated by brief, sincere arias on an unexpected subject: her love of Jesus Christ. Slowly it becomes clear that de Pougy’s most intimate relationship was, is and will be with her Lord. In the last decade of her life she became a Dominican tertiary. She was buried, in 1950, in her religious habit.

In her final notebook, de Pougy wrote, “If anyone thinks that [my diaries] ought to be destroyed, I approve. If anyone wants to publish them, make a selection of these memories which crush my repentant heart—if their publication...in all their horror might benefit some straying soul, I approve.” She offers them, she says, “ONLY in the spirit of humiliation.” This is a showy self-abasement—and yet when de Pougy writes it, I believe it, because of the glimpses of her heart the diaries reveal.

De Pougy writes with élan about her friends, her lovers and her foes (who are often also friends and lovers). But these anecdotes are punctuated by brief, sincere arias on an unexpected subject: her love of Jesus Christ.

For most of the diaries’ pages, her most characteristic attitude is insouciance. She is erratic and materialistic—she knows this herself, but that doesn’t stop her from enjoying it. Her complaints are exaggerated to the point of delight: “My ‘Maintenon’ dress exhausted me, I was the slave of that white collar which crushes so easily. Lianon! Organdy’s victim!” Even as faith begins to soak into her life like blood on a ballgown, she doesn’t seem to feel the weight of it. She can do a topless photo shoot in the morning and then pick up her well-worn copy of The Imitation of Christ to read a chapter before bed. In an early entry she regales her diary with the story of the confession she made before her marriage to Ghika: “For Liane de Pougy to make her confession must have been quite awkward, don’t you think? She polished it off like this: ‘Father, except for murder and robbery I’ve done everything.’”

This is a soufflé faith, and there was no chance it would remain aloft forever. De Pougy’s savvy wit—and her awareness of her own dancing intelligence—may have kept her from acknowledging the sins that did not fit her self-image. She cheerfully confesses (and deliciously details) her flightiness, her melodrama, her pleasure in tempting and conquering both men and women, her lax faith, her love of pretty, fancy things. She talks herself out of repentance. After she spends an evening with two women friends in “delicate, tentative caresses, like inhaling the perfume of a flower,” she writes, “I love my friends. Surely, dear Lord, it can’t be a great sin?” (Two weeks later she records her appreciation for St. Teresa of Ávila’s Meditations on the Father. ) Any cruelties she cannot confess charmingly do not get acknowledged. She does not notice that her fights with her friend Max Jacob are colored by her distaste for his Jewishness. That disdain only wears away—if it did wear away, and they didn’t simply get sick of fighting with each other—after a long and painful education in suffering.

Still, the hardest lessons in her catechism came not from her illicit delights but from her Catholic marriage.

As early as 1920, de Pougy writes, with the rapt, suffering piety of the French Catholic revival, “I draw my consoling faith from the vanquishing of my strength.” The beads on Lianon’s rosary are carved with familiar scenes: childhood prayers, a devotion to St. Anne, a lost child. Her son Marc Pourpe died a hero in World War I, and de Pougy mourned him all her life. She watched her friends develop drug habits, watched the world forget her and move on without a thought. Her affair with Barney had a tumultuous aftermath; and although the two women continued to see and care for one another for a long time, they grew further and further apart until at last their relationship suffered a decisive break.

Still, the hardest lessons in her catechism came not from her illicit delights but from her Catholic marriage. Georges Ghika was even more tempestuous than his wife—especially later in life, when his drinking damaged his mental abilities. The most painful blow came when Ghika ran off with a friend of de Pougy (with whom de Pougy herself was enthralled), leaving her alone and devastated.

De Pougy begins the process of divorce—a fact reported in The New York Times, a testament to her old notoriety. Then the diary skips two months, and when she picks up her pen again, Ghika is back. De Pougy writes that a woman religious to whom she turned for counsel told her to renounce self, do her duty and take back her husband, but what passed between the couple remains private. (Although she does note that they reunited with pleasure in the bedroom!) De Pougy’s depiction of her husband is not flattering. As his mind deteriorates, he spends days in incoherent, cruel ranting; he makes failed attempts at sex that his wife endures rather than welcomes. She is anguished and prays that God will let her die. And yet she is surprisingly tender. She sees her husband as ill and accepts him as a part of her, and so she cares for him. He depends on her. They manage.

In 1928, in the middle of their suffering, they traveled together in the Alps near Grenoble. Here she received not so much “a twitch upon the thread” of faith as a good hard yank. Stopping on a whim at the Asylum of St. Agnes, a home for children with physical and mental disabilities, de Pougy “left that place shaken to the quick, vanquished by the Mother Superior.” After pouring her heart out to the nun, de Pougy visited many times and devoted herself to raising money for the children’s care. Her own suffering and others’ Christianized her, as fossils may turn to opal.

The diaries represented to their author her life as a sinner; when that life no longer interested her, she had no reason to write.

Light-hearted Lianon still shows her face here and there. One late diary entry is a funny, touching, ambivalent tribute to her old lesbian friends: “We were...voluptuous and cerebral little apostles, rather poetical, full of illusions and dreams.” But in 1940 she writes: “The sinner has disappeared, Liane de Pougy of the forty blue notebooks full of iniquity and scandal, lightness, frivolity, intrigue and lies—Liane de Pougy is no more. ‘My God, my suffering at having offended You is extreme.’”

After that, there are only a handful of entries. Ghika at last becomes gentle: “my friend, my devoted companion, my unhappy child.” She gains a confidant, R. P. Rzewuski, O.P., to whom she entrusted her diaries; he wrote the preface to the 1979 edition. And then she puts down her pen. She signs her last entry “Anne-Marie Ghika...the last of the last.” She would die in 1950, after nine years of no writing.

One of the reasons I believe de Pougy when she says she is not eager for these diaries to become public is that she stopped writing them. She had already written less and less as her life grew harder. The long silences that punctuate her reports should be a structural failure in the diaries’ narrative. It should make readers feel that the point of de Pougy’s life lay in the things she wrote about most fluently, the earlier things: the fun. Instead, the silences seem mysterious and protective, indicating a kind of truth that can only be experienced rather than described.

The diaries represented to their author her life as a sinner; when that life no longer interested her, she had no reason to write. But the diaries also show Lianon the seeker. While you are looking for something, you have to write down all the places where you tried to find it. But once you have found it, you don’t need to keep maintaining the list.