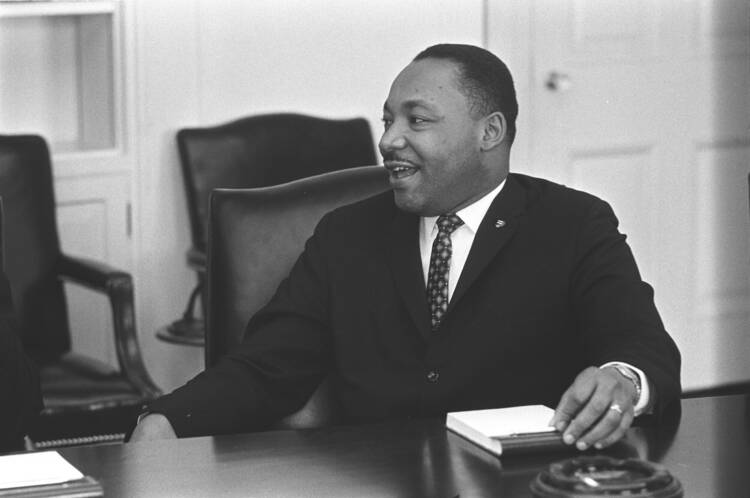 In 1963, following his historic address on the National Mall during the March on Washington, Martin Luther King Jr. was labeled by the F.B.I. as “the most dangerous Negro in the future of this Nation.” Concerned by King’s growing popularity and personally fearful of the “RISE OF A ‘MESSIAH’ [sic] who could unify...the militant black nationalist movement,” longtime F.B.I. director J. Edgar Hoover initiated a concerted campaign to delegitimize King’s leadership through surveillance, intimidation and veiled threats.

The toxic relationship between the F.B.I. and King is the subject of the highly-anticipated documentary, “MLK/FBI,” which screens virtually until Sept. 26 as part of the 58th New York Film Festival. The director Sam Pollard uses his insightful film to present a complex portrait of King not as an infallible saint, but as an imperfect champion of civil rights. Mr. Pollard is no stranger to documentaries on influential Black Americans; he is the director of previous works profiling Sammy Davis Jr., Ellis Haizlip and Maynard Jackson.

The toxic relationship between the F.B.I. and King is the subject of the highly-anticipated documentary “MLK/FBI.”

In the 1950s, the F.B.I. was convinced that King, and Black Americans in general, were particularly susceptible to Communist influence and radical ideas. (“Watch everything that moves in the ghetto,” reads one F.B.I. document.) After King begins consulting with Stanley D. Levison, a lawyer with a history of involvement in Communist politics, Hoover convinces Attorney General Robert F. Kennedy to let the F.B.I. wiretap Levison’s phone. Despite what he tells President John F. Kennedy, King continues to work with Levison and further agitates Hoover.

In early August 1963, the bureau, through its wiretapping of King associate Clarence Jones, learns of King’s private extra-marital affairs. Instead of concerning themselves with Levison’s Communist connections, the F.B.I. then seeks to obtain recordings of King in compromising sexual situations in order to destroy his public image as a moral leader. Robert F. Kennedy authorizes the F.B.I. to wiretap King himself, but without being made aware of the bureau’s more salacious intentions.

In the 1950s, the F.B.I. was convinced that King, and Black Americans in general, were particularly susceptible to Communist influence.

Eventually, the bureau mails a tape of King’s private conversations with women to him and his wife, Coretta Scott King. In addition to the tapes, the bureau sends King a letter, purportedly penned by the domestic intelligence director William C. Sullivan, alleging to have been written by a Black civil rights supporter disgusted by King’s infidelity. The 1964 letter reads in part:

King, there is only one thing left for you to do. You know what it is. You have just 34 days… You are done. There is but one way out for you. You better take it before your filthy, abnormal, fraudulent self is bared to the nation.

In the film, the former F.B.I. director James Comey says reading the letter made him “sick to his stomach” and that “this entire episode represents the darkest part of the bureau’s history.” The Pulitzer Prize-winning biographer of King, David J. Garrow, states that by 1965 King faced a personal crisis over fears of the tapes being released to the American public. “[He] was clearly in very serious emotional turmoil, emotional fear,” said Garrow.

Perhaps the most unsettling portion of the film examines the F.B.I. allegation that King, in January 1964, witnessed and encouraged the rape of a young woman at the Willard Hotel in Washington, D.C. Handwritten notes in a since-released F.B.I. document claim that King engaged in several extra-marital affairs (which Clarence Jones has confirmed), that he paid prostitutes for sex and that he “looked on, laughed and offered advise [sic]” to a female parishioner as she was raped by Baptist minister Logan Kearse.

The film neither prematurely convicts nor exonerates King of that disturbing allegation. Rather, it presents the existence of the claim and allows viewers to draw their own conclusions in the absence of factual evidence and access to F.B.I. tapes. Those recordings, currently under lock and key in the U.S. National Archives, are scheduled for public release in 2027.

The New York Times calls the film “timely as an alarm clock.”

“MLK/FBI” further prompts a discussion regarding the longstanding fear of Black male sexuality in the United States, infamously exploited in D.W. Griffith’s controversial 1915 film, “The Birth of a Nation.” According to the historian Beverly Gage, who was interviewed for the documentary, J. Edgar Hoover interpreted King’s sexuality through a Southern segregationist viewpoint that saw Black men as a sexual threat to women (particularly white women). The bureau’s keen interest in sullying King’s sterling reputation makes the accuracy of their damning claims more challenging to judge.

The documentary takes on new meaning in 2020, a year marked by civil unrest, escalating racial tensions and repeated incidents of police brutality toward Black citizens. The New York Times calls the film “timely as an alarm clock.” During a New York Film Festival talk on Sept. 24, America asked the director Sam Pollard if he views his film any differently now as opposed to when production began. “[The film] seems so relevant today, even more so than I thought it would be two-and-a-half years ago,” he said.

Beyond ‘I have a dream’: It’s time to take Martin Luther King Jr. out of the box
Régine Michelle Jean-Charles

In a nod to popular (and overwhelmingly positive) depictions of the F.B.I. in American cinema, Pollard provides brief excerpts from anti-Communist productions like “Big Jim McLain” and “I Was a Communist for the F.B.I.” Pollard’s film—a bonafide Oscar contender—consists mostly of black-and-white archival footage, as well as color photographs of King at home with his children and rare footage of the capture of the assassin James Earl Ray in London.

In all, “MLK/FBI” proves to be an engrossing look at the public persona and private life of a major 20th-century historical figure and the institutional forces that sought to humiliate him.