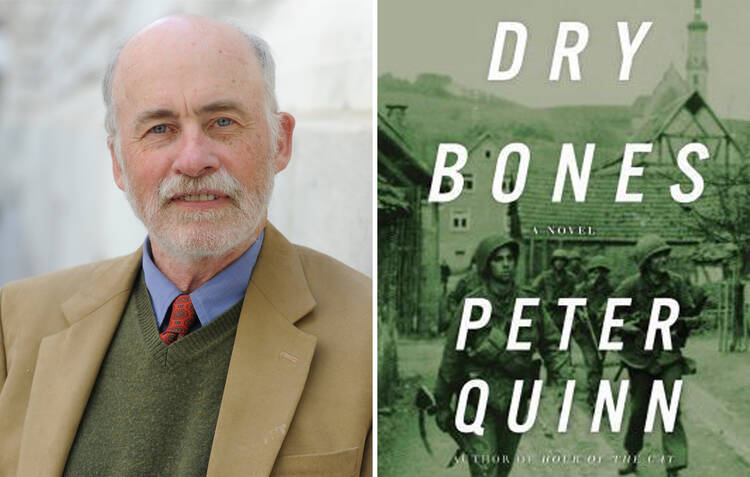 A reader familiar with New York-based Irish American writer Peter Quinn’s work can be forgiven for identifying the novelist with Fintan Dunne, the central character in three of his four period-piece novels.

A cynical, world-weary and unmistakably Catholic detective in three novels, Dunne in many ways comes across as an alter ego for Quinn and his coming of age in pre-Vatican II New York.

A younger Dunne first appears in The Hour of the Cat, which involves investigation of a Nazi-inspired eugenics campaign in New York City in the years just prior to the U.S. entry into World War II.

Fintan Dunne comes across as an alter ego for Quinn and his coming of age in pre-Vatican II New York.

An older, more wizened Dunne shows up again in Dry Bones, a post-World War II story of espionage and U.S. government involvement with ex-Nazi operatives, and a mature Dunne exits the narrative stage in The Man Who Never Returned, an engaging fictional retelling—25 years after the fact—of the disappearance of New York Supreme Court Judge Joseph Force Crater in 1930.

Incidents of Dunne’s Catholic upbringing and his doubt-filled practice of the faith as a private investigator color much of the narrative in the three novels. For example, Quinn presents a reflective Dunne in churches, such as this moment in Dry Bones:

Dunne silently repeated the Suscipiat, one of the prayers from the Mass he’d mentioned as an altar boy at the Catholic Protectory, a single, tongue-twisting Latin sentence (‘Suscipiat Dominus sacrificium de manibus tuis…’). Dunne went to Mass occasionally, to confession when he felt the need, ditto for praying. Hail Marys and Our Fathers mostly. Prayers he didn’t remember learning, with words he didn’t think about, just repeated. The one prayer that he carefully articulated, that made him feel as though he was actually praying, was the one whose words he didn't understand: “Suscipiat.”

“Fintan Dunne is a composite of people I grew up with in the Bronx,” Quinn told Catholic News Service. “He’s got a hard shell but, inside, there’s a core of decency and humanity. He’s suspicious of the powerful and wealthy and can’t be intimidated. He’s a Catholic who’s casual in his practice; while not always on the straight and narrow, he has an acute sense of right and wrong.”

Quinn is also author of Banished Children of Eve, an epic-length novel detailing Irish immigrant struggles in the days leading up to the advent of the U.S. Civil War. The story, which won the 1995 American Book Award, is an intriguing history lesson on the construction of New York’s St. Patrick’s Cathedral and of the struggles of New York’s first archbishop, “Dagger” John Hughes who, Quinn believes, made the New York Irish into a political as well as religious constituency.

This work, which Quinn says helped him to reconsider his attitude toward the Catholic faith in general, reads like a history of the emergence of the Catholic Church in America as a result of the massive immigration of “famine” Irish in the mid-19th century.

“I lifted the title of Banished Children of Eve from the ‘Salve Regina,’ a favorite prayer that I’ve said since I was a child.”

“I lifted the title of Banished Children of Eve from the ‘Salve Regina,’ a favorite prayer that I’ve said since I was a child,” Quinn said. “For me, it expresses the human feeling of exile (‘mourning and weeping in this vale of tears’) as well as the hunger for return (‘turn again thine eyes of mercy toward us’). The characters from the book are Anglo American, African American and Irish. They’ve all been expelled from one garden or another and seek to find a place where they feel they belong.”

Quinn, however, believes The Man Who Never Returned is probably his most Catholic in terms of its allusions to striving, suffering and redemption in a fallen world.

“Each chapter features a quote from The Divine Comedy, a book I’ve gone back to many times since I first read it in college,” Quinn explained. “The story opens with Fintan Dunne, the protagonist of all three mysteries, finding himself… ‘in the middle of life’s journey, I woke to find myself lost in a dark wood away from the straight path.’”

In Dunne's case, the dark wood is a New York department store, where he finds himself feeling outdated and past his prime. As he becomes involved in tackling a baffling, unsolved case, he passes through his own version of hell, purgatory and paradise. His journey is the real story, not that of the vanished jurist, a case Quinn deliberately leaves unsolved.

Quinn also served as a speechwriter for Gov. Hugh Carey and contributed to America starting in the 1970s.

Prior to becoming a full-time fiction writer in 2008, Quinn worked as a speechwriter and corporate editorial director for Time Warner. He earned a bachelor’s degree from Manhattan College in 1969 and a master’s in history from Fordham University in 1974. Quinn also served as a speechwriter for Gov. Hugh Carey and contributed to America starting in the 1970s.

Quinn’s response to the essential question in this writer series—a Catholic writer or a writer who happens to be Catholic?—is both unique and revealing.

“I don’t happen to be Catholic. I choose to be. And I don’t happen to be a novelist. I choose to be. Both come with their tribulations and triumphs, and at times, there’s the temptation to walk away. But I stay because, at the deepest level, these identities define my sense of self. That said, I don’t consciously write, defend or advance church precepts or presumptions. I’m a novelist, not a philosopher. I write about people who are confused and compromised in all sorts of ways.”

By way of elaboration, Quinn offers the metaphor of God the creator as the primordial writer.

“He brings these characters (us) into life and endows them (us) with free will,” Quinn said. “At times, I want to warn my characters away from certain choices and decisions, but I can’t force them to do what they don’t want to do. Doesn’t God face the same dilemma? If I try to make a character do something not true to who he/she is, the writing becomes forced and false. I believe in original sin and grace and redemption. I don’t ask my character to embody my beliefs. I ask them to be believable and real.”

Quinn’s home parish growing up was St. Raymond’s in the Bronx, where he was influenced by a young curate, Father John Flynn.

“The example and memory of Father Flynn are one of the reasons I’m still a Catholic,” Quinn said. “His heroic service to the marginalized is a reminder of what it means to live out the essential message of the Gospel.”

He has also attended Sacred Heart Parish in Dobbs Ferry, N.Y., and St. Joseph of the Holy Family in Harlem.

Quinn continues to pursue Catholic writing projects, both as a journalist and as a writer of fiction.

“I've been working on a new book for six years, give or take a year or so,” he told CNS in November. “The title is Eat the Moon, from Yeats’ poem ‘Brown Penny.’ It’s a race to see which will be finished first—me or the novel.”

Mike Mastromatteo is a Toronto-based columnist and book reviewer for Catholic News Service.

@mikejmastro
Provide feedback on this article
Join the conversation: Login or create an account
Before you can comment, you need to update your profile to include your first and last name, as required in our comments policy. Then reload this page and you'll be set up for commenting. Update your profile