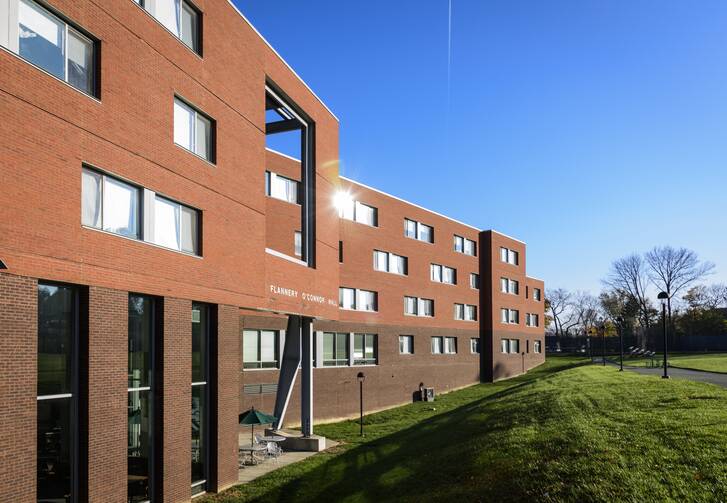 The structure will now be known as “Thea Bowman Hall,” in honor of the first African American member of the Franciscan Sisters of Perpetual Adoration.

Sister Thea, a Mississippi native, was a tireless advocate for greater leadership roles for Blacks in the Catholic Church and for incorporating African American culture and spiritual traditions in Catholic worship in the latter half of the 20th century. Her sainthood cause is under consideration in Rome.

Angela Alaimo O'Donnell, a former Loyola professor, is spearheading an effort for the university to reconsider its decision.

O'Connor, a Southern Gothic writer who died of lupus in 1964 at age 39, is recognized as one of the greatest short-story writers of her era, one whose work often examined complex moral questions.

Concerns about her use of racist language in private correspondence prompted more than 1,000 people to sign an online petition asking Loyola to rename the residence hall.

Father Linnane said it was a difficult decision and that the issue of O'Connor and race is very nuanced.

“I am not a scholar of Flannery O'Connor, but I have studied her fiction and non-fiction writings,” he told the Catholic Review, Baltimore's archdiocesan news outlet. “Particularly in her fiction, the dignity of African American persons and their worth is consistently upheld, with the bigots being the object of ridicule.”

The priest noted some of the new disclosures about O'Connor's use of racist language date to the 1940s when she was a teenager.

“They don't take into account any evolution in her thinking,” he said.

The priest still felt the need to be sensitive to concerns, especially from students, about O'Connor’s use of racist language and an admission in her correspondence that she did not like people of color.

Concerns about O’Connor’s use of racist language in private correspondence prompted more than 1,000 people to sign an online petition.

”A residence hall is supposed to be the students' home,” Father Linnane said. “If some of the students who live in that building find it to be unwelcoming and unsettling, that has to be taken seriously.”

He said he hoped the decision is not viewed as a wholesale repudiation of O’Connor’s legacy and noted that professors will continue to assign the study of her writings.

“We were looking to name the building for someone who reflects the values of Loyola and its students at the present time and whose commitment to the fight for racial equality—from an intellectual point of view and from a faith perspective—would be more appropriate for the residence hall.”

Loyola is undergoing a larger review of all the names of its buildings and a university committee advised him on the renaming proposal.

Angela Alaimo O'Donnell, a former Loyola professor who currently serves as the associate director of the Francis and Ann Curran Center for American Catholic Studies at Fordham University in New York, is spearheading an effort for the university to reconsider its decision.

O’Donnell, an expert on O’Connor's life and writings, who recently wrote the book, Racial Ambivalence: Race in Flannery O'Connor, agrees that one of Loyola's buildings should be named in honor of Sister Thea, but that O'Connor’s name should not be banished.

O’Donnell said O'Connor grew up in the virulently racist culture of the American South and could not help but be influenced by it.

She said O'Connor grew up in the virulently racist culture of the American South and could not help but be influenced by that culture. She also said the writer should be celebrated for opposing that culture and racism in her writings.

Over the course of her career, O’Connor became more bold and more outspoken in her opposition to the “inburnt beliefs” of her fellow Southerners and Americans, O’Donnell said.

"I find it ironic that her name would be removed from a Catholic, Jesuit university," added O'Donnell, saying the author portrayed America and the human soul as deeply divided, broken and flawed, and "much in need of conversion and repentance."

O'Connor held herself, her racist white characters and all white people up for judgment, O'Donnell said.

"She lays claim to America's original sin of racism, seeks atonement, and she atones," O'Donnell added, noting that even on her deathbed, O'Connor was working on a story about white racists who arrive at the difficult knowledge of their sin.

‘She lays claim to America's original sin of racism, seeks atonement, and she atones.’

The Fordham professor wrote a letter to Father Linnane signed by more than 80 authors, scholars and other leaders, urging the priest to keep O'Connor's name on the building. Among the signatories are leading American authors, including Alice Walker, Richard Rodriguez and Mary Gordon. Auxiliary Bishop Robert E. Barron of Los Angeles, who is chairman of the U.S. bishops' Committee on Evangelization and Catechesis, also signed it.

A July 27 statement from Walker is included in the letter saying that "we must honor Flannery for growing."

"Hide nothing of what she was, and use that to teach," the well-known African American novelist said.

The letter asserts that very few, if any, of the great writers of the past can survive the "purity test" to which they are currently being subjected.

"If a university (Catholic or otherwise) effectively banishes Flannery O'Connor, why keep Sophocles, Dante, Shakespeare, Dickens, Dostoevsky and other writers who were marked by the racist, misogynist, and/or anti-Semitic cultures and eras they lived in the midst of? No one will be left standing," it said.

O'Donnell took issue with a recent article in The New Yorker magazine about O'Connor and race, which she believes provided a "very incomplete" portrayal of the writer's stance on race and which has fanned much of the outrage against the Southern author.

The Fordham professor also was critical of the online petition to rename the building, which asserts that "recent letters and postcards written by Flannery O'Connor express strong racist sentiments and hate speech."

"How could O'Connor have written 'recent' post cards and letters when she's been dead for 56 years?" O'Donnell said. "I wonder how many of the people who signed the petition have studied O'Connor's work or have read any of her writings? How many of them have any connection to Loyola?"

Father Linnane said most people in the Loyola community have responded "very positively" to the name change. He also praised Sister Thea's efforts to eliminate racism and her work for justice.

"She lived a life of great holiness," he said.