When they cut my father open
a fifth time, he lost a little more
of his life through the stitches in his skin
and I worried his soul had been out
for too long. A bag of blood dripped
along plastic veins, into his valves & atriums,
like an exposed, primitive heart.
He thought he was being replaced
with a stronger man, cell by cell.

By then he had more memories than flesh.
I asked if he was hungry and he said
his ration card filled out too soon.
But communism had ended years before,
though I still saw its geometric ghost
spread over the tower blocks beyond
the hospital's parking lot.

He looked thinner, his skin unaccustomed
to the hollow underneath it. The new blood
stains on his pyjama top revived the old ones,
and made it look like God
had pressed a rose onto his chest.
He kept pulling his blanket to his chin, as if afraid
the seams of another world showed.

His eyes, caged by a mesh
of capillaries, were so far out
of his head, that I wondered if he lived
beyond himself. He kept looking down
at his hands because for so many years,
his body was the only thing
he had owned alone.

If I visited too late in the evening,
it would take him a few moments
to remember my name. He'd point
at the striated apples my uncle brought him

and tell me to eat, still trying to be
a father rom beyond the edges
of his bed and asking
if I would come again.

Show Comments ()
Join the conversation: Login or create an account
Before you can comment, you need to update your profile to include your first and last name, as required in our comments policy. Then reload this page and you'll be set up for commenting. Update your profile
Advertisement
Advertisement

This article also appeared in print, under the headline “Hospital View,” in the August 2020, issue. 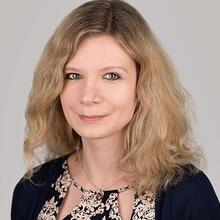 Elena Croitoru lives in Kent and has an MSt in Creative Writing from the University of Cambridge. Her work has been selected for the Best New British & Irish Poets 2019. She won second place in the Edward Thomas award and was shortlisted for the Wasafiri New Writing Prize.