‘Blood Quantum’: a zombie film with a conscience 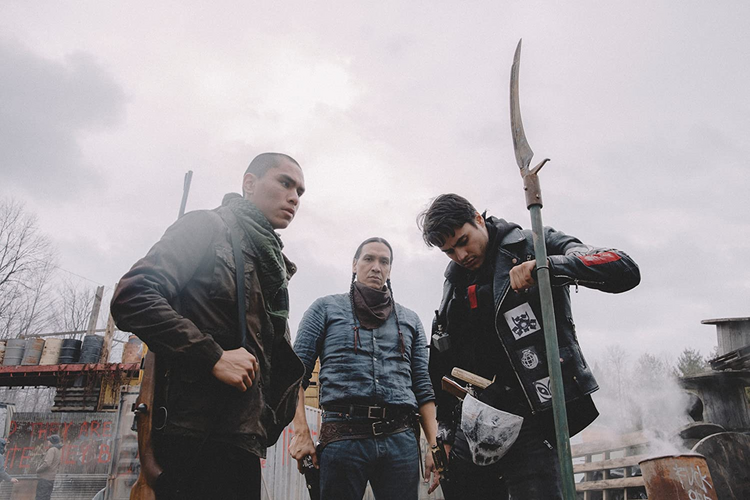 “Blood Quantum,” the sharp and bloody new film from the writer and director Jeff Barnaby, does something surprisingly rare in the relentlessly popular zombie genre: It makes the return of the dead a symbol of the legacy of past injustice.

In this fast-paced, startlingly gory, character-driven tale, the people of a fictional Canadian First Nations reservation watch the beginning of an apocalyptic zombie outbreak—and then realize that only people with a sufficient amount of Native blood are immune. Suddenly, they can choose whether to protect themselves and watch the white people destroy one another, or try to keep a haven for uninfected non-Natives, even at the risk of their own safety.

The choices the characters make are shaped by their personal pasts as well as the generational trauma of occupation, loss of land and destruction of culture. In “Blood Quantum,” the past isn’t dead—it’s coming to get you.

‘Blood Quantum’ makes the return of the dead a symbol of the legacy of past injustice.

The opening titles set the mood, quoting Exodus 34:12-16 against treaties and intermarriage (“Take heed to thyself, that thou make no treaty with the inhabitants of the land whither thou goest lest it be the cause of ruin among you….”) and attributing it to an “Ancient Settler Proverb.” Then we watch an old man, Gisigu (Stonehorse Lone Goeman), bring in and gut his haul of fish. This opening is a reference to the raids by Quebec police on the Listuguj Mi’gmaq First Nation in 1981, the year “Blood Quantum” takes place. Disputing Native claims to ancestral fishing rights, Quebec sent riot police into the reservation to seize fishing nets and rough up inhabitants—events Jeff Barnaby witnessed firsthand as a child.

That personal knowledge helps explain the vividness of the film’s sense of place. Every setting in this movie is fully imagined, rich in detail and personality—the antlers on the outer walls, the pawnshop made partly from a camper van. This opening scene brings us into a world of familiar work: Lay the fish on the wooden work table, throw the guts in a bucket.

Then one of the gutted fish starts to leap.

Before you know it somebody’s puking blood all over a jail cell, and the hospitals are filling up with bizarre biting injuries. (The palpable feeling of danger in these enclosed institutional spaces makes “Blood Quantum” an especially difficult watch during this pandemic.) The central characters are a fractured family whose internal divisions and links to the white world are both a microcosm and driver of the film’s plot. Traylor (Michael Greyeyes) is a sheriff, like his retired father Gisigu. He has two sons, who are half-brothers. The elder (Kiowa Gordon), who goes by “Lysol” (which will become a brutal pun once the infections start), is still hurting and angry after losing his mother. Joseph (Forrest Goodluck) loves Lysol but that love leads him into trouble. Before we even meet him we know that he has been jailed, and it turns out that he committed his extremely adolescent crime in order to be with his brother.

Before you know it somebody’s puking blood all over a jail cell, and the hospitals are filling up with bizarre biting injuries.

Lysol cares about Joseph but envies him for having a living mother (a quietly persuasive Elle-Máijá Tailfeathers). Joseph’s white girlfriend, Charlie (Olivia Scriven), is planning to abort their baby; their heart-to-heart in the abortion clinic’s waiting room is, like all the family relationships here, low-key and deeply moving.

These complex relationships are explained quickly and naturally in the film’s first segment, which shows the beginning of the zombie plague. Knowing someone well, as people in small towns know one another, means caring about them while also knowing all the reasons they can’t be trusted. “Blood Quantum” gets a lot of gallows humor from the characters’ unwillingness to put up with what they assume is more nonsense from the idiots they love. Joseph’s mom, picking him up from jail, says dryly, “I don’t give a shit who bit you. I’m about ready to bite you myself!”

Once the characters figure out that the dead are returning to life, everything happens very fast; almost all the characters we have come to know, with the key exception of Charlie, get bitten. Then cut to black.

The movie now unfolds its main concern: life in mid-apocalypse. Six months after the events we just saw, communication with the outside world has been lost. Corpses burn in the streets. Everyone’s figured out that First Nations people recover from the virus—though their bodies bear human tooth marks—whereas white people become mindless, undead attackers.

In “Blood Quantum,” the past isn’t dead—it’s coming to get you.

We figure all this out by watching a group of desperate white refugees try to persuade the guards, including Lysol, to let them into the reservation. The décor and costuming here are punk and slightly camp: “Mad Max: Fury Rez.” Barnaby loves to give us what we want, whether it’s postapocalyptic hairdos or an old sheriff coming out of retirement to cut down zombies with a sword.

But the rage, fear, helplessness and self-protection fueling everybody’s actions are painfully realistic. Some of the immune treat the vulnerable—who were once the privileged—with callousness and contempt, as if they are walking smallpox blankets. And the vulnerable have many reasons to lie to their ambivalent protectors.

This volatile situation explodes in a series of events, driven by Lysol’s fury, which I admit I found hard to completely follow. The film respects its audience’s ability to keep up without needing everything explained, but a little more hand holding would have helped me figure out where we were at certain moments, why people who seem to intensely mistrust one another were mingling freely, and what motivated certain key actions.

Finding God in ‘The Warden,’ an Iranian prison drama and parable
Eve Tushnet

That said, it is easy to follow the emotional and symbolic logic of “Blood Quantum.” Keeping the white people around is incredibly dangerous, and some of the people of the reservation aren’t interested in taking the risk. Lysol has been cut off (albeit partly by his own actions) from the parental generation, and a truly nasty turn of events cuts him off from the generation to come; this leaves him, unlike his brother, with nothing to lose.

The symbolism of the film’s climax is ambivalent to the point of anguish: Brother turns against brother, protecting one’s own leads to devastation, and yet there literally is no safe way for these communities to coexist. We are bound up in one another’s lives, white and Native inextricably linked by present bonds of love as well as past bonds of injustice. But these bonds, which offer the survivors of “Blood Quantum’s” climax their hope for the future, are also the biggest threat to that future. The film ends before we find out if any hope lies across the river, in the land without walls.

“Blood Quantum” is available to stream on Shudder, which is offering a month’s free trial using the promo code SHUTIN.