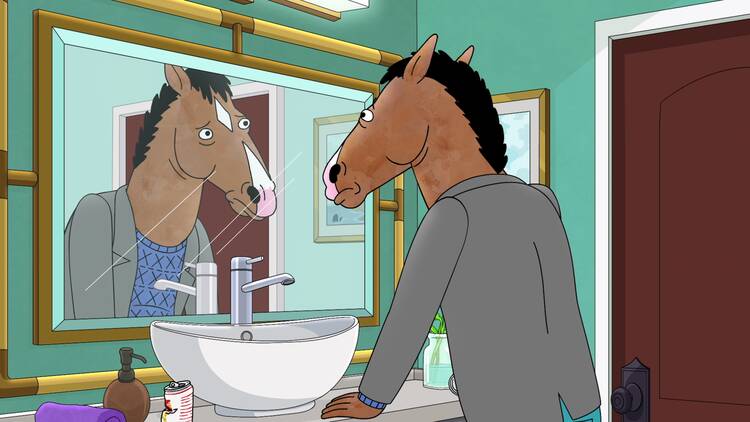 “BoJack Horseman,” the Netflix cartoon about the depressed, horse-headed celebrity, set itself the nearly impossible task of being a hopeful comedy about chronic alcoholic relapse. For a long time it seemed like the hope came from BoJack’s (voiced by Will Arnett) recurring attempts to change his life: his repeated brief stints of sobriety, the resentful care he offered his abusive mother, his TV comeback, his apologies (“Also I know that my apologies are pretty much meaningless at this point and I’m... sorry for that too.”); his outburst of jogging. But the show has frequently used BoJack’s former fame as a sitcom star to hint at the nature of relapse, the life where nothing works for very long.

The Sisyphean sitcom star rolls that rock of personal change up the hill, grunting and sweating all episode long, and somehow it has rolled back down by the time the theme song plays. Except in real life one thing does change: With each attempt at recovery, people trust you less; and you trust yourself much less.

How can a show about the endless, exhausting ebb and tide of relapse have an ending?

So how can a show about the endless, exhausting ebb and tide of relapse have an ending? The final season of “BoJack” displays the show’s artistic confidence. It has one of the series’s single funniest episodes, a door-slamming farce at a disastrous surprise party. And it has unforgettable horror imagery, designed by the cartoonist Lisa Hanawalt. “BoJack” turned out to be terrific at horror—the distorted imagery of Season 4, in which we go inside the deteriorating mind of BoJack’s dying mother, will linger at the edges of my nightmares for a long time. Much of this final season’s arc is the result of the death of Sarah Lynn (Kristen Schaal), the former child star who went on a bender with BoJack back in Season 3 and died at his side in the planetarium of the Griffith Park Observatory. Images of that planetarium burn through the final season. Bottles of alcohol fill with that black cosmic void, glittering with stars that might warn him away from relapse—or beckon him toward it.

The second-to-last episode takes place in BoJack’s mind, at a dinner party of all his unbeloved dead. It’s a harrowing half-hour, a tour de force. His mother performs a strange, slow dance, twirling a thick black ribbon that at last mummifies her completely and drags her down into the dark. As in Season 4 we get to see what Beatrice Sugarman Horseman was like when she was beautiful—how much bleakness there always was in her charms. And this haunting dance with death may also be a rare occasion on which the show explores the seductions of alcoholic drinking. Mostly “BoJack” treats substance abuse as purely self-medication. Rarely did “BoJack” show us the fun of bad drinking, even though nobody would do it if it wasn’t fun at the start; here, at least, we get a hint of the lightless ecstasy alcohol can provide, like standing in a lightning storm, at once exhilarating and obliterating.

And this episode, of course, is BoJack’s own descent toward death. At the heart of “BoJack’s” final season is the need to satisfy viewers without actually ending BoJack’s story. He is to get neither closure nor meaning, and yet the show clearly wants viewers to end the season with a certain peace. This is a difficult place to land.

“BoJack’s” final season gives many of its characters endings about as happy as they can manage. The most interesting secondary storyline might be Diane’s. Voiced by Alison Brie, the freelance pop journalist Diane Nguyen spends much of this final season trying to write a memoir, which collapses partly because she’s depressed but mostly because she doesn’t have anything to say.

Diane wanted her struggles to mean something—to be, as one episode’s title puts it, “Good Damage.” Shouldn’t your personal damage be something you can monetize or (in a more generous interpretation) use to help other people? But Diane’s pain isn’t useful; it doesn’t make her, for example, a more compassionate person. She ditches the memoir and writes a fluffy YA series (“Ivy Tran, Food Court Detective”). She hopes that the series will help other weird kids, and it does help her connect with her boyfriend’s angry teenage son, but these positive effects aren’t why she’s writing it. She does what she’s capable of doing and that’s all.

“BoJack’s” final season gives many of its characters endings about as happy as they can manage.

As for BoJack himself, the story has certain requirements. BoJack has to be punished, and not solely by himself or his friends. He has harmed a lot of people and the final season subjects him to our two contemporary forms of civic justice: a social-media mob and prison. The latter is presented as much gentler than the former. Yet BoJack’s prison experience is a fantasy of justice without atrocity. Although the show says he is in a “supermax” prison, he finds peace organizing community theater among the prisoners. It’s about as removed from real (supermax!) prison as possible but it does, I suppose, reflect the insight that public harm can’t be remedied by private amends.

BoJack’s suffering also can’t have meaning. Although we get a glimpse of a (fake) church service, BoJack goes to AA throughout the final season, and at the dead people’s dinner party the only happy attendee says he found peace through helping others, the show does not explore religion or AA or service. (The AA scenes are especially notable for their lack of any satire, whether fond or scathing, of the fellowship itself. Rehab gets a much harsher depiction.) Religion and AA and service are all things people try, and “BoJack,” as a show about relapse, is about the failure of trying. The American obsession with self-improvement is one of the show’s great targets. Even our pleasures have to be justified as a fulfillment of our duty to ourselves—a mindset “BoJack” targets with one of the show’s best background gags, a poster in a teenage girl’s bedroom that proclaims, “I’LL SELF-CARE WHEN I SELF-DIE.”

In the final episode BoJack’s friend Todd tries to encourage him, but all his exhortations to further effort are either depressing or dumb, like all the encouragements people offer you during relapse. And so BoJack and Diane end their series side by side in silence. They don’t know what any of it means. They care too much about their feelings and completely lack a vocabulary of right and wrong. But in a show that has always depicted the undertow of the past and the unbearable pressure to self-make your better future, they are finally looking only at the present moment; they’re at rest.

German bishops outraged after Swiss cardinal compares synodal path to rise of Nazism.
The president of the German bishops' conference demanded an apology from a cardinal who seemed to compare the German Synodal Path with a Nazi ideology.
Catholic News ServiceOctober 03, 2022