Finding God in ‘The Warden,’ an Iranian prison drama and parable 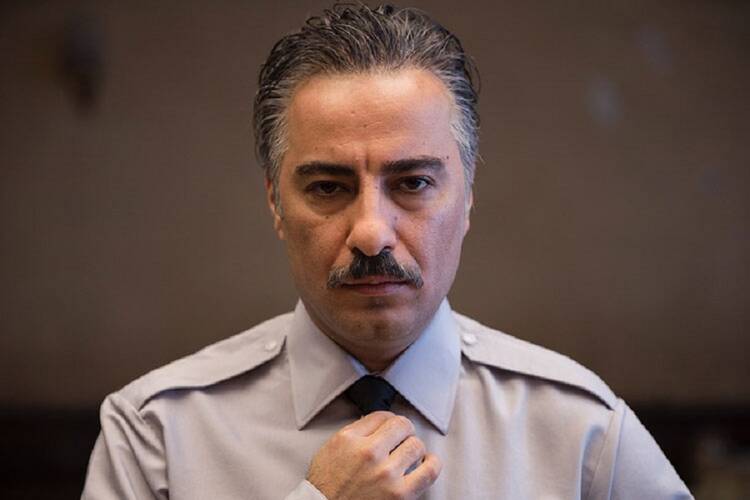 The Iranian writer and director Nima Javidi’s recent film “The Warden” is a prison drama, as its title might suggest. It is also an elliptical parable—with, in a truly weird twist, elements of romantic comedy.

We see the prison before we see the warden: institution before people. The film opens in the late 1960s on the day the prison closes to make way for a new airport. The prisoners are busy taking the place apart, and the camera gives special attention to the gallows. Rain batters down, washing the scene in deep blues punctured by golden fire and electric lights.

The prison’s beauty suggests that God is here somewhere—not running the place, but hidden in its depths.

Inside, the prison officials’ uniforms have the same blue and gold color scheme, perhaps suggesting that the prison has permeated and remade them. The warden, Major Jahed (Navid Mohammadzadeh), has a brief exchange with a prisoner whom he wants to rebuild the gallows at the prison’s new location. The prisoner (Ismaeel Pourreza) refuses, saying, “I’ll be cursed by people’s families,” but gives in when the warden threatens him. (“You think those who get hanged are people?” Major Jahed blusters.)

After this minor obstacle, easily overcome through competent administration, the warden receives a pleasant surprise: He has been tapped for a high-ranking official posting. We get to see his careful, correct bearing as he takes in the news—and then his covert delight as he exults in front of a battered mirror, dancing with the air, even practicing his ranting-dictator face. It is our first hint that this warden’s ardent emotions might not fit within the confines of his new role.

We see the prison before we see the warden: institution before people.

His happiness doesn’t last. The film’s plot gets going when Major Jahed discovers that one prisoner has taken advantage of the chaos of the prison closure to escape. He quickly figures out that the escapee can’t have made it through the gates and must be hiding somewhere in the prison. He calls for the prisoner’s former cellmates, who have their own agendas, and he brings in the escapee’s social worker, the reserved, observant Susan Karimi (Parinaz Izadyar).

The major likes Susan from the start—in the way that cinematic male representatives of order often fall for cinematic lady representatives of compassion. He smooths his eyebrows before they meet; he serenades her over theprison’s public-address system. He is funny and quirky and endearing—and he is hunting her client, whom she believes to be innocent. Their romantic banter includes an argument about whether the prison can be run with kindness: whether, as Susan argues, “You can even run Hell with kindness.”

Jahed wants to be a good warden and a good man; he wants a clean conscience and a fine career.

This is the film’s heart. Jahed wants to be a good warden and a good man; he wants a clean conscience and a fine career. The camera often catches him just a little bit off-center in the frame: a man askew, tilting between his two duties to government and God. Susan is equally torn between role and conscience. She, too, is part of the system. She has made a career bringing kindness into Hell, and maybe she has been too quick to let Hell set the terms. It may not be possible to reconcile institution and conscience, or prison and God.

“The Warden” sometimes makes the easier choice over the more ambiguous one. There is no real question that the escapee is innocent. He was framed because he clashed with a powerful local landowner. (The powerful can turn any ideal into a shield, and “justice” has historically been one of the easiest for them to subvert.) There is no last-minute twist that makes this prisoner anything more than a lamb to the slaughter. And “The Warden” ends before we see any of the consequences the film’s events will hold for the characters’ futures. Its characters’ final choices will require more than one hard sacrifice, but the film does not force us to remember and attend to those sacrifices.

‘Knives Out’ Review: A whodunnit with a (thrilling) Gospel message
Eve Tushnet

But such ambiguities or shadows might be out of place in this film, which is closer to fable than to complex psychological drama. At one point or another every major character winds up enclosed in a cell, an unsubtle suggestion that we are all judged, trapped, caught in our societies’ particular structural sins. Javidi shows us the stark beauty of the near-empty prison. Its echoing order stands in comical contrast to the tiny human details, like the escaped prisoner’s pet frog: “If you find this frog,” reads a note the prisoner leaves behind, “please put him in the pond behind the prison. May God bless you.” And perhaps the prison’s beauty also suggests that God is here somewhere—not running the place, but hidden in its depths, hidden somewhere in the klieg lights that pierce through the smoke bombs.

The film’s final sequence relies on a haunting image, a metaphor which can’t be quickly translated into explanatory prose. The gallows rolls through the desert on the back of a truck, but it hides a secret: a desperate hope, hiding within the death machine. God may hide, but our actions in response to him expose our own hearts to judgment.