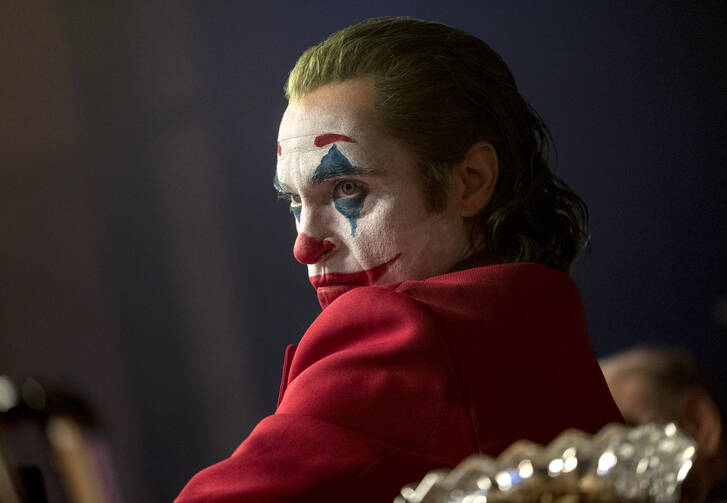 With award season now in full swing, punctuated by Monday’s announcement of this year’s Academy Award nominees, Todd Phillips’s “Joker” (2019) has once again popped up into the center of the cultural zeitgeist like some sort of indestructible jack-in-the-box.

“Joker” collected 11 nominations—the most of any film—including Best Picture, Best Director (Phillips) and Best Actor, for the much-lauded performance of Joaquin Phoenix. Indeed, Phoenix’s tour de force portrayal of Arthur Fleck might be the only thing about the film that has critics and audiences in full agreement, as all other aspects of this comic book villain’s origin tale seem to be cause for debate.

“Joker” is more than just another comic book film. It has hit a nerve with an already nervous American public.

It can be argued that the film’s success is due in no small part to its link to a significant comic book franchise, along with the fact that its antagonizing protagonist is one of the most celebrated villains in recent Western culture. But “Joker” is more than just another comic book film. It has hit a nerve with an already nervous American public.

The film’s contentious reception can be seen in its 69 percent critics’ approval rating on Rotten Tomatoes, a low number for such a prominent Oscar contender. To put these ratings into perspective, last year’s Best Picture winner, Peter Farrelly’s problematic “Green Book” (2018), a film considered to be one of the more questionable winners in recent years, currently has a 78 percent critics’ approval rating.

The film’s polarizing nature may very well be the reason it is leading the Oscar race, as no one can ever accuse Hollywood of not liking a good controversy (one, of course, that does not have to do with misconduct allegations against one of their own), and “Joker” has been rife with controversy since day one. It began before the film’s general release in October with concerns over the film’s sympathetic depiction of an “incel” gunman, closely mirroring the real-life perpetrators of mass shootings that have become very much a part of American life in the 21st century. The Cinemark chain decided not to screen the film at the Colorado cinema where a mass shooting had occurred during a showing of “The Dark Knight Rises”in 2012. Phillips added more fuel to the fire in an interview by questioning the motives of the film’s critics, saying, “outrage is a commodity” and arguing that films like “Joker” lead to useful conversations about violence.

The film’s polarizing nature may very well be the reason it is leading the Oscar race.

The film has also not been free from censure from a cinematic perspective, and the term “derivative” has been frequently bandied about by critics in noting how generously Phillip’s borrows from Martin Scorsese’s oeuvre. That Scorsese’s longtime collaborator Robert De Niro makes an appearance as talk show host Murray Franklin, taking on the role Jerry Lewis had portrayed opposite Scorcese’s own take on a delusional, would-be stand-up comedian—Rupert Pupkin in “The King of Comedy” (1982)—suggests there is a fine line between “derivative’’ and “homage,’’ and that the applicability of either term is frequently in the eye of the beholder. Indeed, perhaps the film’s artistic merits would not be questioned as much were it helmed by a director known for putting out “serious’’ cinema rather than by Phillips (who, until the release of “Joker,” was best known for the sophomoric “Hangover” films).

Yet none of the above can fully explain what has brought “Joker” to the forefront of cultural discourse. I would argue that it is the film’s instability both in terms of its narrative structure and its visuals, which is at the heart of the film’s polarizing effect. It calls to mind the late 1970s/early 1980s New York City known from Scorcese’s films, and for much of the first half of the film, there is little to remind the audience that they are supposed to be looking at the mythical Gotham City or anything remotely related to a comic book. (That the iconic Empire State Building can be seen in the background of several scenes speaks to the film’s intentions regarding the ambiguity of setting.) It is in this disorientation, when it is a study of the dispossessed and when the element of the comic book villain is merely an echo to the greater narrative, that the film demonstrates its potential to be a significant piece of work. And yet…

As the film moves toward its conclusion, it becomes clearly attached to its comic book universe, one with its own set of clearly defined ethical conscriptions in regard to heroes and villains. It is in this clarity and certitude, when answers are given, that leads to a sort of cognitive dissonance for the audience, as if we were being taken on a journey that raised questions and then given answers to other, different questions.

As the film progresses and becomes more explicitly appended to its comic book franchise, the questions it raises about the mentally ill, about the marginalized, about the lonely and the unlovable, about the “less than,” are swept away and ignored. The film slips into a gap between the comic book and a social realist character study, which allows these questions to be raised in the first place but also necessitates their eradication—and that has provoked such disparate reactions from critics and the public.

The film by its very design performs a cinematic sleight-of-hand, promising something that it cannot ever deliver on. And so with “Joker,” the joke is on us.