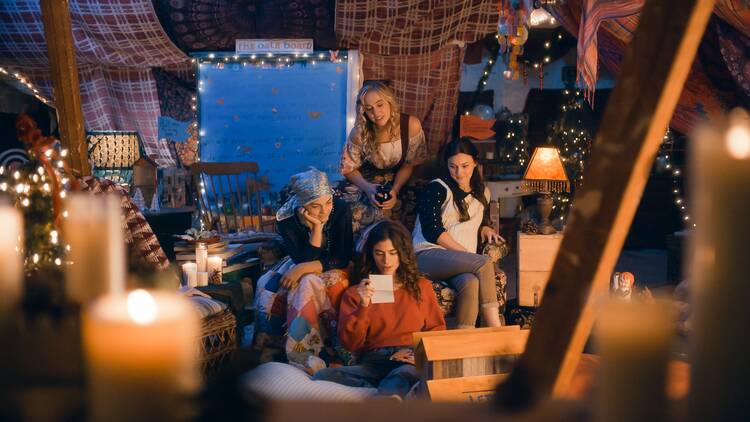 Since its publication 150 years ago, Little Women, Louisa May Alcott’s coming-of-age novel, continues to inspire generations of readers as well as new film adaptations. Sandwiched between two major releases (Heidi Thomas’s acclaimed 2017 BBC series and the highly anticipated feature film directed by Greta Gerwig), the March sisters are getting a modern makeover in a new movie, which was released in theatres on Sept. 28. Unfortunately, lazy storytelling, a confusing timeline and major casting missteps in this “Little Women” leave viewers with a muddled mess rather than an imaginative update to the classic tale.

In this adaptation, set in the 21st century and directed by Clare Niederpruem (who also co-wrote the screenplay), we meet the March sisters as young girls acting out the journey from Pilgrim’s Progress and discussing their future dreams, or their “castles in the air,” just as they do in the novel. As the plot unfolds, it becomes clear that rather than reimagining the story for a new generation, this “Little Women” merely updates the March sisters’ wardrobes with jeans and T-shirts, simplifies the characters beyond recognition and half-heartedly attempts to contemporize the story using a few cheap modern stock scenes.

Lazy storytelling, a confusing timeline and major casting missteps in this “Little Women” leave viewers with a muddled mess rather than an imaginative update to the classic tale.

This adaptation follows the March family as the sisters tackle various challenges. Jo struggles to write a novel; Meg defends her desire to become a wife and mother; Beth battles cancer; and Amy pursues a career as an artist. While readers have found these characters relatable and inspiring since Little Women’s publication, the modern March family vacillates between forgettable and unlikeable. The protagonist Jo (Sarah Davenport), only seems to have one defining emotion: anger. Davenport seems unable to deliver any lines with her “inside voice.” Instead of presenting a flawed but lovable and complex character, the screenplay reveals Jo to be merely unconscionably selfish as she yells her way through the film.

At age 33, Lucas Grabeel, of “High School Musical” fame, is entirely unbelievable as a teenage Laurie, the March sisters’ beloved next door neighbor. Some changes that alter the essence of a character (such as the pacifist Mr. March being a soldier overseas in this adaptation—played by Bart Johnson, also of “High School Musical”) might be overlooked; however, other changes really destroy the heart of the entire story. The materfamilias, Marmee (Lea Thompson), for example, is almost a noncharacter with only a handful of lines. One gets the vague sense that she is involved in the story, but her role as the anchor of the family is nonexistent. The result is a hollow plot that feels as unmoored as this adaptation’s March family.

A modern retelling requires creative alterations so that the story makes sense set in a new era, and “Little Women” fails to do this effectively.

A modern retelling requires creative alterations so that the story makes sense set in a new era, and “Little Women” fails to do this effectively. It is unclear why some scenes were updated and others left untouched. Rather than getting to the heart of the timeless themes in a creative way for modern audiences, updated scenes are confusing or rely on tired tropes. The film replaces the scene of a wealthy family friend’s social debut with a rowdy prom where the oldest March sister, Meg, is in danger of being sexually assaulted. Basic questions, such as why Meg, a homeschooler, is attending prom at the local high school, are left murky. But other scenes that are crying out for updates, such as Amy burning Jo’s manuscript in the fire (what teenager writes a novel by hand in 2018?), do not veer from the original. Additional translation issues are caused by a lack of texture in the setting and characters. While the novel’s depiction of musical Beth receiving the piano her family could never afford from the wealthy Mr. Lawrence is a tearjerker, the scene in this film is merely confusing as the March’s financial situation is barely touched on.

It is unknown to the viewer why the gift of a piano would be so meaningful, and as a result, the sentimental scene drags. This is not the only moment that seems to be a near copy of the classic 1994 film version with actors in modern dress. A confusing timeline for the first half of the movie adds further problems by making the film disorienting for those familiar with the original story and hard to follow for those new to the tale.

Successfully reinventing a classic is always a perilous task, but Shakespeare given a new setting (such as “West Side Story” or Baz Luhrmann’s “Romeo and Juliet”) or modernized Jane Austen plots (“Clueless” or “The Lizzie Bennet Diaries” come to mind) reveal that it is not impossible. Sadly, instead of a clever update, this “Little Women” is the same old tale, only poorly told.

Instead of highlighting the timeless themes and characters of Alcott’s Little Women for a new generation by resetting the story in modern day, the most valuable aspects of the original are lost in translation in this adaptation. The scenes faithful to the novel are misguided, and the altered scenes are uninspired. While a creative retelling of Little Women for modern audiences would be a gift to a new generation of Alcott fans, this version misses the mark entirely.

Haley Stewart is a beekeeper’s wife, mother of four, speaker, and author of The Grace of Enough: Pursuing Less and Living More in a Throwaway Culture. She blogs at Carrots for Michaelmas and co-hosts the Fountains of Carrots Podcast.