Review: ‘A Beautiful Day In The Neighborhood’ is (surprisingly) not about Mr. Rogers

Review: ‘A Beautiful Day In The Neighborhood’ is (surprisingly) not about Mr. Rogers 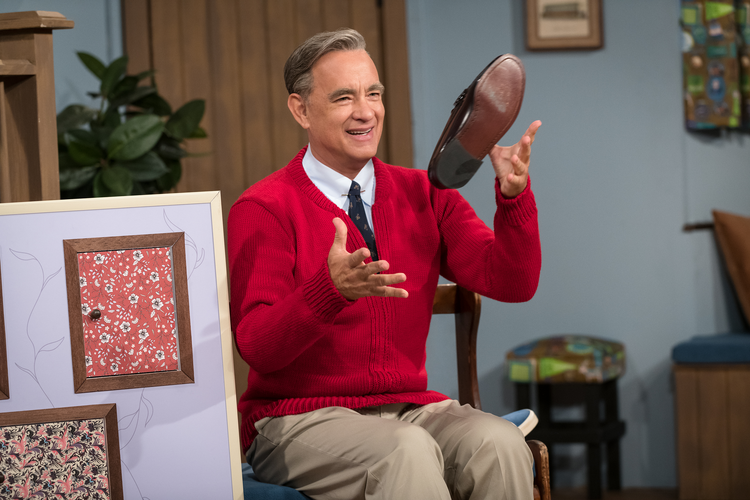 “Children feel safer,” Fred Rogers once said, “when they know what the rules are.” So do moviegoers. And it is hard to believe they won’t be a little bit taken aback by the rule-breaking afoot in “A Beautiful Day in the Neighborhood.” The fact that there is a big-screen “Mr. Rogers movie” is no surprise, nor is the casting of America’s perennial good guy, Tom Hanks, as the saintly (if not quite sainted) children’s television host. But this is not the “Fred Rogers story,” nor is it a dramatized version of last year’s first-rate documentary, “Won’t You Be My Neighbor?” If Hanks wins another Oscar, it will not be for Best Actor. He is—as unlikely as it seems, given the context—a supporting player.

The central figure is Lloyd Vogel (Matthew Rhys, of “The Americans”), a magazine writer based on the real-life Tom Junod, author of a celebrated Esquire profile on Rogers, whom Junod has credited with changing his outlook on life. It certainly changes Lloyd’s, though his journey from angry journalistic hatchet man to understanding father, husband and son may not be exactly the plot viewers are expecting.

The fact that there is a big-screen “Mr. Rogers movie” is no surprise, nor is the casting of America’s perennial good guy, Tom Hanks.

Even if one does not buy into the entire package—I certainly did not—the intentions are good, and easy enough to figure out: “A Beautiful Day in the Neighborhood” is a movie about Fred Rogers the idea. It is about forgiveness, as both an elusive and an achievable quality. Lloyd, who has a professional reputation for taking his subjects down, is angry with his father, with no small degree of justification: Jerry (Chris Cooper), boorish and abusive, abandoned Lloyd’s mother when she was dying of cancer, along with Lloyd and his sister, Lorraine (Tammy Blanchard). When Jerry abruptly resurfaces at Lorraine’s wedding, it leads to a fistfight. Ugly, yes, and resonant. And revealing.

The short version: Mr. Rogers leads Lloyd down the path to forgiveness. En route, the director Marielle Heller—who, coincidentally, was also responsible for last year’s Oscar-winning “Can You Ever Forgive Me?”—takes quite a few chances. For exterior shots, she uses toy sets—just like the ones that used to adorn “Mister Rogers’ Neighborhood.” Aerial shooting also reduces human characters to the scale of playthings as they travel around New York City and, later, Pittsburgh. Puppets—King Friday XIII, Daniel Tiger and other inhabitants of the show’s Neighborhood of Make-Believe—are worked into the narrative. The directorial flourishes are affecting. What is problematic lies in the movie’s DNA.

The directorial flourishes are affecting. What is problematic lies in the movie’s DNA.

The screenplay is by Micah Fitzerman-Blue and Noah Harpster, whose most recent collaboration was “Maleficent: Mistress of Evil.” Their Mr. Rogers movie might have been called “Beneficent: Master of Serenity, Empathy and Agape.” Save for a moment at the very end of the film that concedes that a germ of disgruntled humanity might actually lie beneath the ever-understanding, cardigan-clad exterior of Fred Rogers, he is always in character. This may have been exactly who Fred Rogers was, of course, but because the film incorporates so many dream sequences and outright hallucinations—mostly via Lloyd—you are never entirely sure that Mr. Rogers is not intended as a mirage as well. This would not be an uninteresting idea, academically speaking. But a film is not emotionally engaging when you are forever wondering about what astral plane you are all supposed to be on.

Hanks inhabits Fred Rogers wholly, with an admirable consistency, but while “creepy” does not quite describe it, there is an ethereal quality to the actor’s presentation that borders on parody. Caught between the otherworldly Fred and the off-putting Lloyd, a viewer might not know where to turn, although Joanne Rogers (Maryann Plunkett), Fred’s wife, provides a moment of lucidity and spiritual reason. Asked by Lloyd what it is like being married to a “living saint,” she rejects his premise.

“If you think of him being a saint,” she says, “his way of living is unattainable.” One could argue that point, perhaps. But what Mrs. Rogers is talking about is the marketing of goodness. And for several generations of children, her husband was its master salesman.

Correction, Nov. 22: The name Maleficent was originally misspelled in this review.