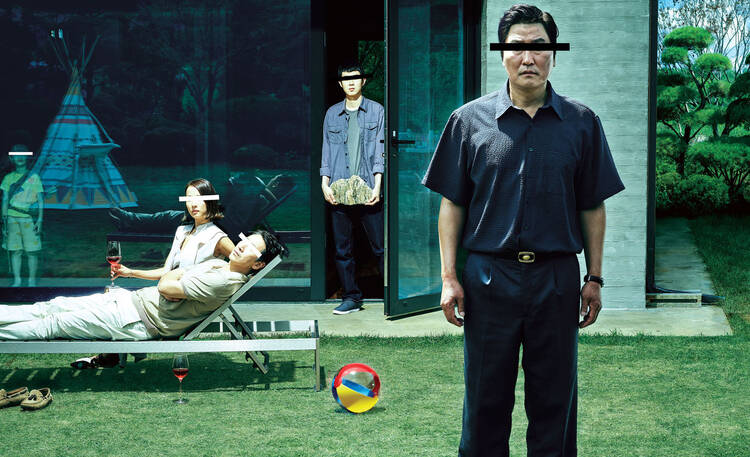 Gauging the success of “Parasite”—the appallingly funny, consistently startling comedy/Marxist parable from the Korean ironist Bong Joon-ho—depends on what race you are watching. A studio “blockbuster” can gross $50 million its opening weekend and still be declared a disaster. “Parasite,” which may eventually hit $25 million, is already one of the most successful subtitled films in years. It is reaching people who do not typically go to movies but are going to this one nonetheless.

Why? Because Bong, who has been responsible for such audacious offerings as “The Host” (2006), “Mother” (2009) and “Snowpiercer” (2013), is a showman first, but also a moralist and even a sophisticate. Call it snobbery or connoisseurship, but the hype surrounding “Parasite” (and it can still be hype if it’s true) is that the film is for people who want to think while they are being entertained. I doubt there has been much cross-over attendance between “Parasite” and, say, “Terminator: Dark Fate.” The polarization of our nation extends to our movie-going.

The polarization of our nation extends to our movie-going.

But that has been apparent for some time. What has been less evident in recent years is whether people could be lured back into movie houses after having fallen out of the habit, whether because of smartphones, sluggishness or what Martin Scorsese recently described as the “theme-park” quality of Marvel movies, which are the only things making the megabucks these days. I think Scorsese is absolutely right that Marvel movies are not only cookie-cutter nonsense but—being devoid of redeeming value and aimed at one’s worst instincts—a little like pornography. Considering the devotion of Marvel fanboys to the ornate scripture of their favorite movie studio, these films also amount to small-scale fundamentalist religion.

“Parasite” is for other people—as are “Marriage Story,”“The Irishman” and “The Lighthouse,” to name some current features. But “Parasite” is also unfettered fun. There may be some audiences that walk out of the film unaware they have received an epic lesson in class warfare. They won’t care. But you don’t have to. What you will do is think: Is there righteousness in poverty? How hard is it for a camel to pass through the eye of a needle? Are there villains in the film? And if so, who are they?

There may be some audiences that walk out of the film unaware they have received an epic lesson in class warfare. They won’t care.

Are the villains the Park family—the oh-so-privileged Dong-ik (Lee Sun-kyun), his neurotic wife, Yeon-kyo (Jo Yeo-jeong), their daughter Da-hye (Jung Ji-so) and her pesky younger brother Da-song (Jung Hyun-jun)—who live in a sprawling, haut-moderne suburban home so vast that even they don’t know what is under their feet? (This will be a major plot point.) Or are the bad guys the Kim family—the teenage Machiavellian genius Ki-jung (Park So-dam), her brother Ki-woo (Choi Woo-sik) and their mom and dad, Chung-sook (Jang Hye-jin) and Ki-taek (Song Kang-ho)? The seemingly shiftless Kims, who live in a basement at the end of a urine-bedewed Seoul alleyway, eking out a living folding pizza boxes, will inveigle themselves into the life of the Parks with catastrophic consequences. But drawing conclusions is not what Bong is about.

The Kims, it should be mentioned, are implausible. Or is their implausibility part of the message of the film? Their domicile is angst-free (except for its lack of wi-fi and proximity to the sewers); they are an affectionate and close-knit group. They are also geniuses, save for a certain obtuseness. “If she wanted,” Mom says of Ki-jung, “she’d be a great con artist.” Would be? She is as devious they come: When Ki-woo gets a tip about a tutoring job with a wealthy family (the Parks), Ki-jung forges her brother’s college documents, gets herself hired as a combo psychologist/art therapist for little Da-song and schemes to get Dad hired as the family chauffeur and Mom as the housekeeper. The Kims move in. Sanity moves out.

To reveal much more about the plot would be to ruin things; the experience of “Parasite” depends on one being astounded by how literally and figuratively labyrinthian the story becomes, how Bong makes hilarious digressions into slapstick and allows the story to become, for a short and tolerable while, a sitcom.

But it is a sitcom with teeth and haunting moral echoes, no small amount of vulgarity and a smart streak of comedy. That it is drawing crowds—even younger crowds, according to Tom Brueggemann, the box-office analyst for Indiewire—says something. That people will go to smart movies. That they are looking for a cinematic edge. And that they will watch movies where not everything blows up—except, in the case of the Parks and Kims, life itself.

Correction, Nov. 21: This review originally stated that Ki-jung forges her brother’s college documents from an American University. An English translation of the film said the documents were from Oxford University.