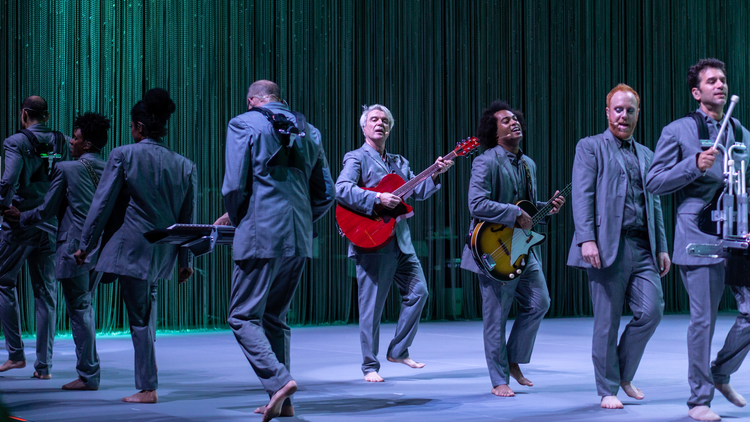 That is the sound David Byrne makes when confronted with the news of today—an unrelenting cycle of violent clashes, partisan debacles, political scandals and various shades of human suffering. In 2018, after two years of gathering uplifting news stories “possibly as a kind of therapy,” Mr. Byrne wrote of his intention to create a “cross-platform project” which included a good news website. The result, the nonprofit online magazine Reasons to Be Cheerful, aims to be a “tonic for tumultuous times.” It derives its name from the 1979 single “Reasons to Be Cheerful, Part 3” by Ian Dury and the Blockheads.

“I imagine, like a lot of you who look back over the past year, it seems like the world is going to Hell,” wrote Mr. Byrne in 2018. “It doesn’t matter how you voted on Brexit, the French elections or the U.S. election—many of us of all persuasions and party affiliations feel remarkably similar.”

Mr. Byrne, best known as the dynamic frontman of the 1980s art-rock outfit Talking Heads, is a kind of besuited Renaissance man. In addition to his 16-year run and eight studio albums with the Talking Heads, Mr. Byrne has enjoyed an extensive solo career, collaborating with choreographers, musicians, theater actors and film directors from Twyla Tharp to Jonathan Demme to Devo. He has scored several films, including the 1987 Bernardo Bertolucci drama, “The Last Emperor,” which earned Mr. Byrne an Academy Award.

At 67, he is still working. He is set to open “Theatre of the Mind,” which Rolling Stone calls a “theatrical installation,” next fall in Denver. Currently he is staging his new performance piece, “American Utopia,” at Broadway’s Hudson Theatre in New York and acting as “in-house headline writer” for his recently launched news website.

David Byrne, best known as the dynamic frontman of the 1980s art-rock outfit Talking Heads, is a kind of besuited Renaissance man.

The project is managed by a team of five, including Mr. Byrne, who contributes articles. Its co-editors, Christine McLaren and Will Doig, are both journalists. “Through sharp reporting, our stories balance a sense of healthy optimism with journalistic rigor, and find cause for hope,” reads the website. “We are part magazine, part therapy session, part blueprint for a better world.”

Like Mr. Byrne’s music, a sonic mélange that reflects New Wave, African, funk and even classical influences, the stories found on Reasons to Be Cheerful are unexpected and diverse. A forest of eucalyptus trees in the Egyptian desert, a South Indian art community, the “biochar process” used to produce clean energy in Stockholm, drug decriminalization efforts in Portugal: These are all topics explored. The Web page also includes a collections tab, with sections highlighting stories “about learning to grow in ways that benefit society” and also stories “about hauling climate change scoundrels into court and suing their pants off.”

Speaking this past March at South by Southwest, Mr. Byrne explained why he avoided promoting certain stories. “There’s a billionaire giving money for a hospital—[that] did not count,” he said. “That’s kind of a [one-off] thing. I wanted things that could be copied, that could be an inspiration for us, and we’re not all billionaires that can give money to hospitals.”

When asked by an audience member if his “bleak” viewpoint from his early music career has shifted, Mr. Byrne offered what might be a satisfying thesis statement for his good news project.

“I would like to think that I’m finding something, some bits of hope, that all is not as... bad as it often seems,” he said. “We need these things to show us that we are not as bad as we are portrayed when we look at ourselves in the media mirror. We have possibility, we can do things.”

Show Comments ()
Comments are automatically closed two weeks after an article's initial publication. See our comments policy for more.
Provide feedback on this article
Join the conversation: Login or create an account
Before you can comment, you need to update your profile to include your first and last name, as required in our comments policy. Then reload this page and you'll be set up for commenting. Update your profile
Advertisement
More: Journalism / Music

Ryan Di Corpo is a Joseph A. O'Hare, S.J. Fellow at America.