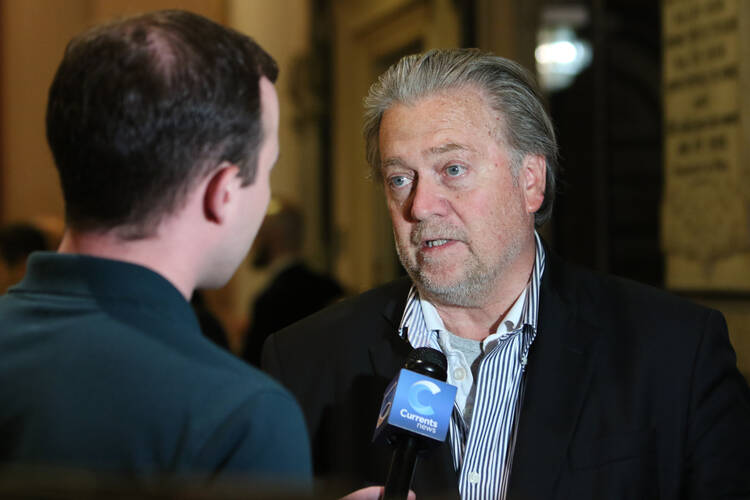 The filmmaker Errol Morris gives us several reasons to recoil from “American Dharma,” his controversial profile and interview with the former White House strategist and alt-right agitator Steve Bannon. One of them is Mr. Bannon’s physical self: Morris provides close-ups so intimate one can virtually peer into the pores on Bannon’s gin-blossomed face. It isn’t pretty. Neither is Bannon’s intellectual dishonesty, but that—fortunately or unfortunately—is the subject of the movie.

Morris is among the elder statesmen of American documentary and has always seemed able to make anything cinematic, even the deceptively simple face-to-face interview that he has made such a major element in his repertoire. This was evident in “The Fog of War” and “The Unknown Known,” which were also about accomplished liars in the highest levels of government (Robert McNamara and Donald Rumsfeld, respectively) and which might, with “Dharma,” comprise Morris’s Trilogy of Plutocratic Malfeasance. Like “Dharma,” they were movies for an intelligent, discerning and informed audience. Morris does not lead you by the hand. If the subject is lying, or delusional, as he often seems to be, Morris presumes the viewer will notice.

Morris does not lead you by the hand. If the subject is lying, or delusional, as he often seems to be, Morris presumes the viewer will notice.

If the viewer doesn’t, then Morris gets accused of giving a platform to a subject who doesn’t deserve it, which has happened with Bannon, the Catholic-school-educated Harvard Business graduate and Hollywood producer who took over Breitbart News after its founder’s death and is credited with helping make the current U.S. president the Trump he is today.

It does seem to this viewer that Bannon should be challenged more than he is by Morris, who is not shy about stating the obvious (“I think there’s an inherent contradiction in the views that you hold,” Morris says, in what may well be a laugh line). But the director is not interested in smearing his more volatile subjects. He wants them to bury themselves in a compost heap of their own cultivation.

The agriculture begins almost immediately. So does the conceit by which Morris probes the Bannon mind: Film clips. He begins with a few from “Twelve O’Clock High,” scenes from which are set in the same kind of Quonset hut in which the Bannon-Morris conversation takes place. (Other movies, chosen by Bannon, include “The Searchers,” “Paths of Glory,” “The Bridge on the River Kwai” and, most provocatively, “Chimes at Midnight,” Orson Welles’s adaptation of the Shakespeare “Henry” plays.) The Gregory Peck character in “Twelve O’Clock High” represents not the “touchy-feely” kind of leadership that Bannon evidently rejects but a no-nonsense martinet who will allow the men to fulfill their “dharma”—their “duty, fate, destiny” as Bannon puts it. (No one mentions that the Peck character suffers a mental collapse before the end of the movie.)

Bannon: “What you think is helping everybody is in fact not allowing them to fulfill their destiny.”

“Modernity is based on emotionalism,” Bannon says. “What you think is helping everybody is in fact not allowing them to fulfill their destiny—even if that fate and that destiny might be their own personal destruction”; or, if you’re a 5-year-old Guatemalan, spending some time in a cage at our southwest border.

By “modernity,” Bannon might as well be referring to Christianity, and one wishes Morris had challenged him on this point specifically: A lot of Christians have been seduced into the Trump camp, and how two such opposing philosophies can be reconciled to each other is something Stephen K. Bannon should be asked to explain. Likewise, Bannon’s championing of what he refers to as Trump’s “populist” approach, a definition he puts the lie to every other time he opens his mouth: Populism, if nothing else, is about catering to the have-nots. The kind of “tough-love” governance that Bannon endorses—and is only ever the choice of the haves—is exactly the opposite of populism, and this represents one of those inherent contradictions that Morris manages to find so perplexing. Or pretends to.

Everyone says they want the truth. But as both a filmmaker and a public intellectual, Morris has pursued it almost as an academic subject with himself as its clinician. In “Standard Operating Procedure,” for instance, he explored the supposed truth exposed by those infamous photos out of Abu Ghraib, which ostensibly showed U.S. military personnel humiliating prisoners but were also about so much more—including our interpretation of evidence and our perception of the seemingly obvious. There’s a kindred moment to this in “American Dharma”: Bannon and Morris are both watching the scene in “Chimes at Midnight” in which the newly crowned Henry V (Keith Baxter) rejects the dissipated Falstaff (Welles) as the former ascends to the throne. What Bannon sees in Falstaff is a man who has fulfilled his dharma by having been an instrument in the king’s misbehavior, education and ascent; Morris sees an old comrade, brutally abandoned. As much as it pains me, I think Bannon has a point as regarding Welles’ interpretation. But expecting viewers to see Bannon or Trump as Shakespearean seems like a long shot.

What a hit piece! I am not a fan of Bannon, but this is more about what type of person the author is then about Bannon.

I learned very little about Steve Bannon- who I am moderately interested in - and much more about John Anderson who I am not interested in at all. I agree just another politically motivated hit-piece

Steve Bannon is part of the detritus surrounding our contemptible president. If a movie maker can show that clearly, more power to him.

You know your going to have a trash bin worthy (or fish wrap, take your pick) article when the first paragraph is about the less than perfect skin condition of the target of the hit, (a fellow Catholic btw).

Amerika, not only have you no standards, no journalistic acumen, integrity, professionalism; now add to that list "no shame."

There are several long, in depth, earnest and forthright interviews on Youtube of Steve Bannon where the interviewer asked the pertinent questions and probed the answers.
From that, I gleaned that Bannon was a believing Christian who incidentally and without contradiction believed that the election of President Trump was an act of divine providence which gave USA an "imperfect instrument" to do a needed set of tasks.
He was crystal clear on the Mexican border being in some places like war-zone Afghanistan with the belligerents being drug cartel gangs and was utterly clear sighted about the mainland Chinese being mortal enemies of their own people and the rest of the world while making it clear that the Republican elite valued both for their own personal profit.

I will pass by the asinine appearance trophe without further comment but believe it is worth mentioning that Bannon used "populist" in the sense of the will of the ordinary population as distinct from the power elite and totally disagree with the SJW or is it Catholic Social Justice teaching that populism is catering for the have-nots.

Bannon has been challenged often enough, and by much smarter critics and wiped the floor with them politely and incisively.

This review derides Bannon as ugly and having a gin blossom face typical of alcoholics— which disease he fought to overcome. I'm not sure how this helps anyone.