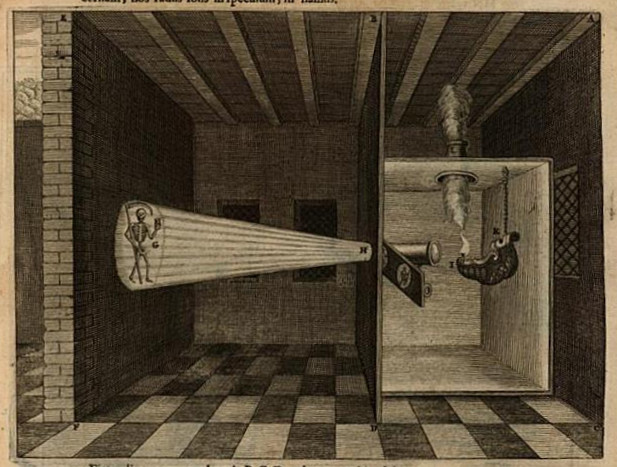 Growing up as a millenial in the Church of the Nazarene, I was restricted from watching horror films. Many evangelical denominations forbade their members from watching such movies. After all, what good could come from consuming media that put impressionable viewers face-to-face with the demonic? Christians ought not, as Ephesians tells us, “give the devil a foothold.” And yet, despite these warnings from some parents, film––especially genres that seek to evoke strong emotions, like horror––is indebted to the Christian religion that would later shun such genres.

The history of film is bound up in histories of devices that can transmit images over distance. While the development of writing and reproducible type is an element of that history, the more critical feature for the creation of cinema is the manipulation of light and darkness.

Horror films are indebted to the Christian religion that would later shun such genres.

The optical experiments made by ancient philosophers and scientists such as Mozi in China in the 5th century B.C. and Aristotle in the 4th Century B.C. (as well as scientists in the Middle East in the 9th century C.E.) revealed the phenomena of “natural projection” that would lead to a Renaissance device called the camera obscura. The camera obscura is a small chamber with a hole to let in light on one end, and it projects an image at the other end. But film as we know it did not begin until practitioners could craft lenses and reverse the formula to project an image.

While the story of cinema hinges on these and other developments, its history cannot be fully understood without paying special attention to the Society of Jesus and its mission of propagating the faith—in particular during the religious struggles of the Reformation and what is sometimes called the Catholic Reformation.

Fever dreams, Scripture and holy images were the background of Ignatius’s transformative experience.

St. Ignatius of Loyola converted his life after the Battle of Pamplona in 1521, in which he sustained a devastating injury to his leg. Fever dreams, Scripture and holy images were the background of Ignatius’s transformative experience. Out of these conditions, he wrote his Exercitia spiritualia, or Spiritual Exercises, a series of prayers and meditations that would take adherents on a 30-day journey through contemplation and imagination.

Instead of relying solely on memorizing and transcribing Bible verses, his exercises were about cultivating an intense meditative practice that would erupt into sensual experiences. Here is a brief excerpt from Ignatius’s meditation on hell, as translated by Louis Puhl, S.J.:

First Point. This will be to see in imagination the vast fires, and the souls enclosed, as it were, in bodies of fire.
Second Point. To hear the wailing, the howling, cries, and blasphemies against Christ our Lord and against His saints.
Third Point. With the sense of smell to perceive the smoke, the sulphur, the filth, and corruption.
Fourth Point. To taste the bitterness of tears, sadness, and remorse of conscience.
Fifth Point. With the sense of touch to feel the flames which envelop and burn the souls.

The exercises of Ignatius were about cultivating an intense meditative practice that would erupt into sensual experiences.

Each exercise asks participants to use their imagination to conjure up intense scenes. The goal of these exercises is to create a situation where someone might be able to grasp an abstract spiritual truth through the senses. You may understand hell as a concept, but meditating on what it might be like to see, hear, smell, taste and touch hell creates a visceral connection.

At first, Ignatius intended these exercises to be practiced by Jesuits and other religious. Later, he and the rest of the Jesuit order considered how to disseminate these practices broadly. His exercises could be difficult for those who didn’t have the same time, commitment or resources as those within the Jesuit order. These spiritual practices would eventually advance into more technological and narrative incarnations in Jesuit pedagogy in the form of elaborate theatrical performances aided by the most advanced technology of the day.

Meditating on what it might be like to see, hear, smell, taste and touch hell creates a visceral connection.

These plays aimed to create sensual displays that would do imaginative work similar to Ignatius’s exercises. The narratives themselves were always originals and would outline the life of a saint or a villain. Each play would end with the main character’s conversion, beatification or damnation.

The Jesuits would employ a variety of forms of cutting edge technology to appeal to the emotions and senses of the audience. One classic example is“Euripus,” a play by Franciscan Levinus Brechtus performed throughout Europe in the 16th century. It detailed a story in which Euripus, an everyman kind of character, puts his faith in God but turns back to earthly vices when he finds the road too difficult. The play ends with the depiction of Euripus being tormented in hell.

“Euripus” is a play that would have used elaborate costumes, settings and practical effects. These effects, as the media historian Siegfried Zielinski reports, would “cause the audience's hearts and souls to tremble …” Jesuit theaters used trap doors to make specters appear, operated cranes to make characters fly, produced wind as well as sounds of thunder and projected images to conjure ghosts, demons and angels.

Athanasius Kircher, a German Jesuit, scholar and polymath, became a key figure in the development of these practical effects in Jesuit theater at his post at the Collegium Romanum. His inventions achieved relevance beyond staged theater. It was Kircher’s update to the magic lantern that is perhaps the most important advancement in the history of cinema.

Kircher’s update, detailed in the 1671 edition of his book, Ars magna lucis et umbrae (The Art of Light and Darkness), shows a magic lantern, basically just a candle arranged with a lens, concealed within a box. The box he called a “catoptric theatre.” Kircher’s innovative addition of the magic lantern to the catoptric theatre would make the projecting device invisible and the projections significantly more immersive for the audience.

It was Kircher’s update to the magic lantern that is perhaps the most important advancement in the history of cinema.

Also, as Gasparr Schot, a Jesuit student of Kircher’s reported, Kircher’s magic lantern was significant because it included a rotating wheel with painted lenses arranged to tell a story. Kircher’s engravings of his magic lantern detailed the projection of a skeletal Grim Reaper alongside a figure in the flames of purgatory.

Martin Quigley’s classic text on film history, Magic Shadows, relates a story where Kircher is accused of practicing the “black arts” for the way he could make figures appear where they were not previously. For its times, it was incredible.

These stories demonstrate the goal of Jesuit media: awakening the senses and emotions of audiences. Jesuit theater is a clear continuation of Ignatius’s Spiritual Exercises to convict the senses rather than just the intellect of the masses.

The motivations behind the Jesuit innovation were not merely to spread the faith. Their priority, according to Kittler, was to win the media war against the Protestants.

This application of Ignatius’s spiritual practices did not happen in a political vacuum. The backdrop for the technical interpretation of Ignatius’s practices was the Protestant Reformation. Friedrich Kittler, an influential figure in German media studies, puts it this way: “The Jesuits’ task, to beat the Reformation’s letterpress monopoly with more effective media technologies, was necessarily aimed at the conversion of the lay public, who through time constraints were not expected to have performed spiritual exercises in the cloister.” The motivations behind the Jesuit innovation were not merely to spread the faith. Their priority, according to Kittler, was to win the media war against the Protestants.

Since the time of their dramas of the 16th and 17th centuries, many Jesuit ideas about storytelling have been absorbed into the cultural milieu of filmmaking. Protestants eventually tapped into this culture as well, especially evangelicals, and began to employ emotive techniques of storytelling. Films like “A Thief in the Night” (1972) or “Left Behind” (2014) used the tropes of horror and disaster films to visualize not hell, but the rapture.

Evangelical films are often oriented toward convincing audiences intellectually of their particular doctrine.

In this process of adaptation, however, evangelical films never seem to give themselves over to the same type of contemplation and emotion that the Society of Jesus did. Instead, these Christian films are often oriented toward convincing audiences intellectually of their particular doctrine. For example, the opening scenes of “A Thief in the Night” feature a lengthy and awkward exposition of what the rapture is and what one has to do to avoid being “left behind.” Before evangelical films can get their audiences to contemplate religious topics sensually, they attempt to convince them of their relevance through the intellect.

The dialectic between the printing press and projected image, first witnessed in the years after the Reformation, has clearly had a lasting impact on the modern media landscape. Beyond technical advancements, the Jesuit innovation of using images to shock, astound and ultimately teach the masses is still present in the way directors and producers think about film and media. While contemporary horror plots would not be found in 16th century Jesuit theaters, they bear some resemblance to the stories told by these innovative Jesuits—putting audiences face-to-face with evil and mortality.

While selling conservative, Christian parents on the contemplative value in horror may still be difficult, horror offers a contemplative intervention in the daily lives of ordinary people. Just like the early modern Jesuit theater, horror offers audiences a chance to think about evil, mortality and judgment. Even now, I can understand hell conceptually, but I only know it through the visualized meditations of horror films.

An excellent piece! Informative and quite fascinating about both Jesuit history and the development of film. It helps me understand why I love movies and why I keep reading America magazine. Thank you for this wonderful essay, Mr. Bernico.

Didn't work, did it?

The drawing seems to show a condensing lens and "slides" but no projecting lens. A person might be able to see a projection of an image so illuminated if they were dark adapted. If they were in a darkroom and the sun were used as an illuminant, it would work well as with the camera obscura. These devices were rather commercially popular in the 19th century so they must have worked well enough. The invention of the arc lamp in the Victorian Age was the real breakthrough for entertaining large audiences. 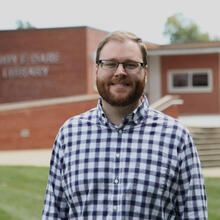 Matt Bernico is the chair of the Media Communication department at Greenville University.