‘Pain and Glory’ review: A rich and moving memory play from Pedro Almodóvar 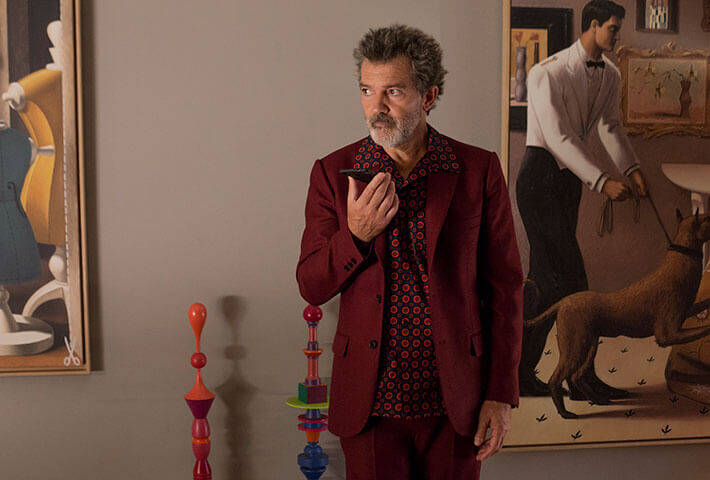 The plan for Pedro Almodóvar, when he was growing up in fascist Spain, was that the boy become a priest—something alluded to in the wonderfully rich and moving “Pain and Glory,” his highly, but not entirely, autobiographical memory play. The plan was not God’s. Instead he became one of the world’s great directors and perhaps the only living foreign filmmaker who is a single-name commodity in the United States market. “Pain and Glory” is, in fact, introduced in the credits as “a film by Almodóvar.”

But Almodóvar has had a vocation, and has certainly been a fisher of men—and women—through his virtuosic way with actors, a palette that pops with delightful precision and a way of dangling melodrama in front of his viewers before hooking them in the heart with emotional truth. It is a technique, of course, a strategy, one that might get tired of, at least for the angler. Which is the place where “Pain and Glory” enters the life of the film director Salvador Mallo.

Pedro Almodóvar has certainly been a fisher of men—and women—through his virtuosic way with actors.

Almodóvar is of sufficient stature that an article on one of his movies—like the one you are reading—would begin by focusing on the director rather than Antonio Banderas, who is the star of this film and has played in eight Almodóvar movies over four decades, beginning with “Labyrinth of Passion” in 1982 (and later “Women on the Verge of a Nervous Breakdown,” “Tie Me Up! Tie Me Down!” and, more recently, “I’m So Excited”). That Banderas is playing Almodóvar’s stand-in in “Pain and Glory” seems fitting; he has been the director’s avatar often enough. The casting calls to mind “8 1/2,” in which Federico Fellini’s muse, Marcello Mastroianni, played a film director ruminating over (and rueing) the scorched landscape of his romantic past, while desperately trying to find his mojo.

One of the bigger differences in these two retrospective views of a filmmaking life is that Salvador Mallo has given up looking for his mojo. He is hip deep in malaise, and Banderas, unceasingly charismatic, nevertheless delivers a very downbeat performance. The character is apparently very close to the real-life Almodóvar—Banderas wears the director’s clothes, the hair is an homage, and they use the filmmaker’s apartment as Salvador’s home. The “pain” of the title is very real, too. Salvador is not necessarily starved for creative ideas as much as he is worn out. He has arthritis, bursitis, tinnitus and, not surprisingly, depression. He has undergone spinal fusion, something Banderas’ portrayal will make viewers feel deeply, whether they have bad backs or not. Salvador also has tremendous headaches, which he takes to treating with heroin.

Everything, notably the interiors, are simply too beautiful to be anything but the work of an exalted imagination.

When he’s nodding out from the drugs—and even when he’s not—Salvador will close his eyes and travel back in time. He may have lost the will to work but not to create something, to fan a divine spark of creation even if it is only in his memories. We visit his school, where his singing voice freed him from classwork and, as a result, they “turned me into an ignoramus.” There are the white-washed catacombs where his needy family lived (“like the early Christians,” someone says). There is the idyllic riverfront, where his mother and other women wash their sheets and hang them on jasmine shrubs to dry. Everything, notably the interiors, are simply too beautiful to be anything but the work of an exalted imagination—and that includes his mother, Jacinta. Played by Penelope Cruz, she looks like no one’s mother except perhaps Salvador’s in an ecstatic fever dream. (As an older woman, she is played by Julieta Serrano.)

Salvador’s heroin use—is it a habit?—arises from his reunion with Alberto Crespo (Asier Exteandia), who acted for him in the ’80s and with whom he has enjoyed a 30-year falling-out. A screening of their old film is something of a debacle: Salvador and Alberto do the Q&A by phone, while smoking drugs. But the renewed interest in his work agitates Salvador’s creative juices and frees his innate honesty. During a bit of voiceover, Salvador admits that he believes in God when he needs him—something his physical decrepitude is making happen more often. Otherwise he is “an atheist,” though he says it in a way that suggests he hopes we know he is shamming: The “glory” of the title, after all, is about resurrection. And Salvador is too smart not to recognize the connections.