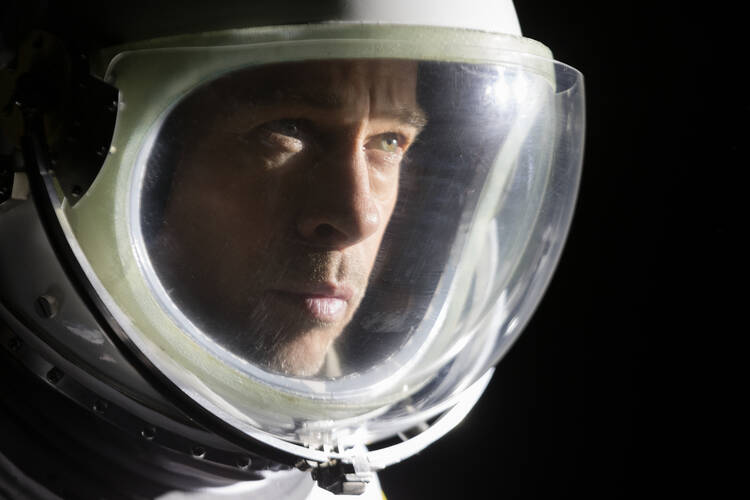 James Gray’s astronaut drama “Ad Astra” is not so much about space as it is about the importance of human contact. It is the tale of Roy McBride (Brad Pitt), who journeys into the harrowing depths of the solar system in search of his father, Clifford (Tommy Lee Jones). Many years before the start of the film, Clifford had embarked on an expedition to Neptune to search for extraterrestrial life. However, he has suffered an unknown tragedy and is presumed lost to space.

The absence of Roy’s father in his life turns him into a stoic and emotionally stunted individual whose inability to trust anyone leads to social isolation and, eventually, alienation from his wife. But when it appears there is hope that his father might be alive after all these years, he is forced to reckon with what his father’s fate has done to him. He begins to wonder whether he is really protecting himself by pushing away everyone and everything he holds dear.

James Gray’s new drama is not so much about space as it is about the importance of human contact.

The voyage he undertakes is indelibly spiritual. The cinematography of “Ad Astra” forces the viewer to confront the vastness and emptiness of space. It is a treacherous journey filled with countless dangers, not the least of which is Roy’s struggle to understand the meaning of his father’s disappearance. There is a fantastical quality that makes the entire film feel like a dream, and Roy’s gruff narration makes it seem as if the viewer has entered a deep part of his consciousness.

God (or at least the talk of God) is a surprising element in the film. While the topic of faith is never explicitly broached, some form of Christianity appears to be commonly practiced among the astronauts. When a tragedy befalls one of Roy’s fellow crew members, the other astronauts perform a funeral for him. They surround their fallen brother in a circle mournfully, and one prays, “May you meet your Redeemer face to face and enjoy the vision of God forever,” before his body is sent out into the vacuum.

God (or at least the talk of God) is a surprising element in the film.

Faith also seems to be a motivating factor for Clifford’s expedition to Neptune. In a message to Roy from years before, he claims to feel the presence of God during his decades-long voyage. It is “overwhelming,” he says, and claims that he feels closer to him there than anywhere else. Clifford’s search for extraterrestrial life seems a holy mission to him, and he even says that he feels as if he is doing God’s work out in space.

These musings are reminiscent of something that Pope Francis once said during a homily. He broached the topic of spreading the faith to aliens as an example of how the church should be open to serving everyone regardless of where they come from. “Who are we to close the doors?” he asked. “If—for example—tomorrow an expedition of Martians came, and some of them came to us, here…Martians, right? Green, with that long nose and big ears, just like children paint them… And one says, ‘But I want to be baptized!’ What would happen?” Pope Francis affirmed that any hypothetical aliens are as worthy of God’s love as any human being.

There is also something Ignatian about one aspect of Roy’s journey. He is required to do regular checks on his mental health, which include reporting on the things he experienced that day. Roy is forced to confront and deal with every trial and trauma he experiences by talking about it aloud. It brings to mind a space-age version of the Daily Examen, one of St. Ignatius’ spiritual exercises that helps one evaluate their actions. While the mandatory checks can seem largely superficial, they nevertheless give Roy an avenue to examine his own development.

Roy’s search for his father eventually leads him to discover some uncomfortable truths. Clifford, it becomes clear, has gone mad from isolation—a vision of what Roy himself might become if he keeps going on his lonely path. When Roy finally finds him, it turns out Clifford has killed his crew when they suggested that they should abandon the mission. However, Clifford had also discovered that, as far as they can tell, there is no such thing as extraterrestrial life in the wider universe. His inability to deal with this discovery only added to his growing mania, but Roy still wants to bring his father home.

Near the end of the film, speaking to his father, Roy addresses perhaps the movie’s most important theme: “At least we know now, we’re all we’ve got.” In a vast universe, the most important thing turns out to be family.

The final sequences of the movie return to Earth, where Roy, having come to an awakening after his spiritual journey through space, is determined to reconnect with his wife and open himself up to new possibilities. After all, who are we to close the doors?

Kevin Christopher Robles was an editorial intern at America in 2019.

Deeper than the Terror

The journey is unknowing
Falling, breaking free
Then let us quest like sailors
Upon a cosmic sea

I yearn to die a lover
And live unto the end
My heart aflame with
Traveller’s Tales
And Aliens my friends!!!

With respect, Mr. Robles, we definitely do not know, in this vast universe, that we’re all we’ve got.

Saw it last night. Few with me. I liked the emotional development, which showed the live and duty to the father and the catharsis. It turns out that the way to find God is living others. On the tech side, good imagining of how an ion drive ship would work, which is only in space, with standard propulsion for lift. Of course, stopping takes a lot more effort. Answering the ship of the apes distress call would have been impossible. Moon and Mars gravity effects were ignored, but are hard to simulate. A ship under constant propulsion would not be a microgravity environment.

Almost as bad as time dilation in Intersteller. Heavy gravity areas would make movement impossible and would make time pass more quickly on a subjective basis. Everything would seem to take forever while objective time progressed normally. The world would be younger than the crew if the crew even survived. The daughter would have been in college and the father would be ancient, even with the time dilation in transit.