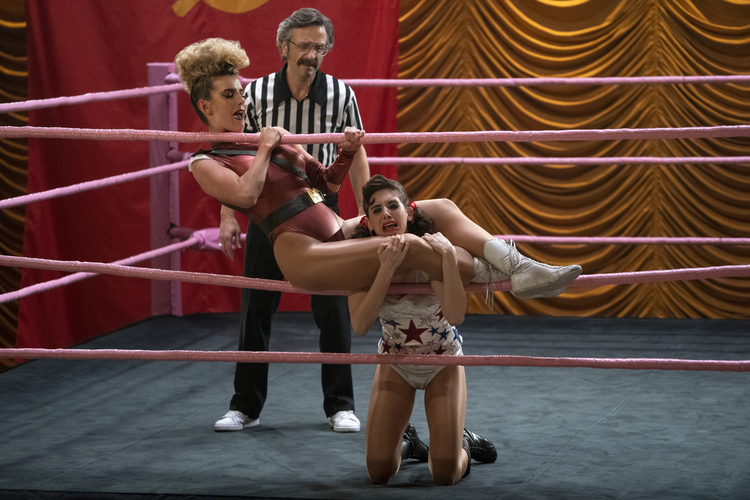 Now entering its third season, Netflix’s series “GLOW” at first seems heavy on plot—veering almost into soap opera-like complexity—as it sets up the off-beat situation in which it takes place. “GLOW” (the titular acronym for Gorgeous Ladies of Wrestling) follows a rag-tag band of Los Angeles fringe actors and misfits who find their way into trust-fund-baby-turned-producer Sebastian “Bash” Howard’s surprisingly wholesome passion project.

The protagonist of “GLOW” and the ringleader of the community of actors turned-wrestlers community is Ruth (Alison Brie), an actor without agent or insurance, who has been lucklessly trying to break into stardom for 10 straight years. How could it get worse? Then, Ruth commits the unforgivable sin of sleeping with her college best friend Debbie’s husband—not once, but twice. At callbacks for “GLOW,” Debbie (Betty Gilpin) bursts into the boxing gym and vents her cuckolded fury on Ruth. The director Sam Sylvia (Marc Maron) watches their catfight with gusto, and promptly casts the ex-best friends as wrestling rivals.

“GLOW” celebrates female strength: on the mat, in the producing studio and on the L.A. auditioning circuit.

“GLOW” has a grand old time diving back into its tempestuous and overblown era: 1980s Los Angeles. “GLOW” examines how even the exuberant burst of cultural equality that made television shows like “GLOW” possible still harbored the patriarchal power structure that kept these women as supporting actors in their own show. Ruth is invited to a hotel dinner with a head of the network for a meeting “about her career.” (It’s not.) Debbie negotiates her way onto the producing team of Sam and Bash, but can only convince the men to abide by her contractually-stipulated inclusion by inviting them to dinner.

This power structure, as Laura Mulvey writes in her seminal essay on “the male gaze,” is embedded not just in the stories of women who struggle against it and the men they must contend with, but in the camera that films their stories. A patriarchal society’s desire to consume the female body and images of it shapes the lens’ perspective before the camera even approaches its subject.

“GLOW” has a grand old time diving back into its tempestuous and overblown era: 1980s Los Angeles.

At first, “GLOW”seems to cater to this male gaze, as Sam and Bash create WWE-type, super-sexualized wrestling personae for the actors. Slowly but surely, the women of “GLOW” co-opt the objectified (and often racially offensive) roles handed to them. The women begin to make the show their own.

Over the first two seasons, as the women begin to see their work as their own, not as an avenue of their own objectification, the camera begins to see this, too. Their work becomes collaborative, empowering and meaningful. And their change of perspective changes ours.

Over the first two seasons, the women begin to see their work as their own, not as an avenue of their own objectification.

While “GLOW” mines the hypocrisy of the unevenly liberated 1980s for plenty of story lines, it finds its best work in exploring the tangled relationship of Debbie and Ruth. The film asks its best questions when it examines the conflict that kick-started the wrestling show and tension that fuels Debbie’s and Ruth’s clashes inside and outside the ring: how do you forgive the unforgivable?

“GLOW” looks at the mechanisms of competition and forgiveness within a relationship by pushing Debbie and Ruth’s friendship to the limits: sleeping with a friend’s husband is a paradigmatic symbol of trauma to the bonds of trust between two friends, an unmistakable breaking of a covenant of faithfulness.

Desperate to make up for shattering her friend’s life, Ruth makes tentative peace offerings. Debbie sometimes accepts, sometimes rejects. Debbie, now in the thick of a divorce, often lashes out at Ruth, the catalyst. Ruth suffers Debbie’s subtle and overt manipulations and abuses, taking them as “punishment for her offense.”

On the mat, in the ring, on the stage, Ruth and Debbie work together not just as consummate professionals, but as true teammates.

But sometimes we see the friends’ genuine affection shine through. Amid the toxic dance of danger and distrust between Ruth and Debbie, we see moments of real partnership. On the mat, in the ring, on the stage, Ruth and Debbie work together not just as consummate professionals, but as true teammates—listening, communicating, working with one another in the easy flow that comes from love and trust.

Debbie wrestles to reconcile her desire to forgive her best friend with the fact that Ruth has caused the collapse of her family.

Season 2 brings Ruth and Debbie’s fragile relationship to a breaking point, when Debbie fractures Ruth’s fibula in the ring. Ruth, her gluttony for punishment finally filled, confronts Debbie for her cruelty. The months of pain pours out of their opened wound. When Debbie storms out of the hospital room, it seems like their match has finally reached its conclusion.

But Debbie storms out of the hospital straight into Ruth’s motel room. She returns to the hospital with a change of clothes for Ruth, so her friend won’t have to exit the hospital in her wrestling leotard.

“GLOW” celebrates female strength: on the mat, in the producing studio, along the thankless gauntlet of the Los Angeles auditioning circuit. But the women of “GLOW” are at their strongest when they are caring for one another—even when knocking each other to the mat. “GLOW” ends its second season celebrating the tenacious strength of female friendship. As Bash, Sam and the women open the third season with a live show in Las Vegas, viewers can be sure that whatever new strains test this community of underdogs, the women of GLOW will find their remarkable strength not only within themselves, but within each other.

Betty Gilpin -- see the bio in Thursday's New York Times -- she grew-up in the area of South Street Seaport and attended Fordham!