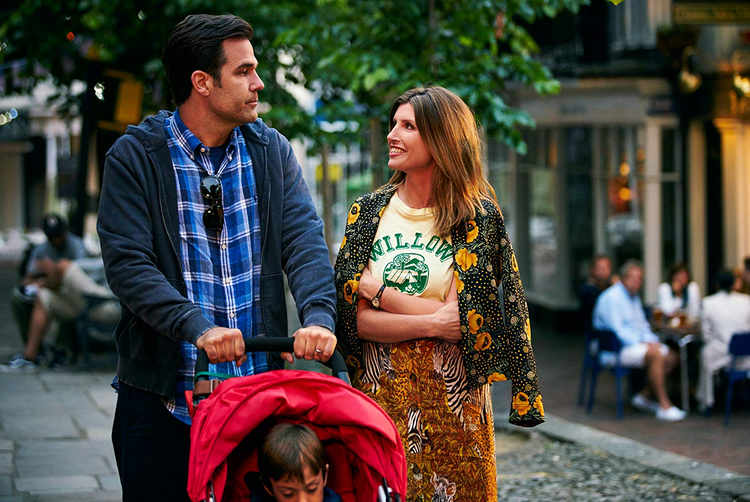 When “Six Feet Under” debuted on HBO in June 2001, as much as I loved the unusual premise about a family-run Los Angeles mortuary, the thing that most affected me was the honesty of the characters. People in the Fisher family sometimes said exactly what was on their minds, even if it was ugly or uncomfortable. And—this was the real shock for me—the world did not end. Feelings could get hurt, relationships sometimes broke. But for the most part, life just went on.

“Is that actually possible?” I used to ask myself. Can members of a family (or church for that matter) just put it all out there without the whole edifice of their lives crumbling as a result? Can we really just be unapologetically ourselves, even when that is awful or messy? I realized it was just a television show, but for me each episode was a glimpse of a reality that I deeply wanted to be possible.

‘Catastrophe’ asks: Can we really just be unapologetically ourselves, even when that is awful or messy?

For the last four years, Amazon’s hit show “Catastrophe”—whichAmerica’s Eloise Blondiau first reviewed in 2017—has played like a British spinoff of “Six Feet Under.” Sharon Hogan, the show’s Irish creator, and the American comedian Rob Delaney play a middle-aged London school teacher and American advertising executive. The two have a brief fling while he is in town on business and end up getting pregnant and having the baby together. It is the kind of story a typical American sitcom would tell by way of catch phrases, goofy neighbors and a laugh track—anything to simplify the problems that such a premise would engender in real life. But “Catastrophe” always leaned in to the discomfort, just allowing these two characters to be the selfish human beings that most of us are at least some of the time.

Half the delight of the show is witnessing the awful (and often crass) things they say and do, almost none of which can be printed in a Catholic magazine. (A very small taste: “When I see a happy pregnant woman on the street,” says the unhappily pregnant Sharon, “I want to punch her.”)

But the real wonder of “Catastrophe”has been its ongoing discovery: you can say out loud the very worst things you’re thinking without destroying everything. “Kids scream all the time,” Rob says at one point. “And then they’re happy the rest of the time. And adults, we try to keep everything stuffed in a box that explodes every once in a while and hurts people.”

Last week Amazon released the show’s final season. And—spoilers ahead—the last episode was as honest and brilliant as the show has ever been. Rob and Sharon fly to America to visit his sister and mother (played in previous seasons by the great, late Carrie Fisher), only to discover she had died while they were in the air. His mother’s death leaves Rob questioning what he is even doing with Sharon. Death, he says to Sharon, “would be a welcome relief. From the day I met you I’ve struggled to make you happy. And it never works….You’re mean, and you’re selfish, and nobody likes you. More importantly, I don’t like you.”

Half the delight of the show is witnessing the awful things they say and do, almost none of which can be printed in a Catholic magazine.

But at the very end, having discovered that Sharon is pregnant with their third child, the two of them sit on a beach and unexpectedly reconcile. “I threw up when I saw [the pregnancy test],” says Rob. “But then I thought, why not? I mean, it could be fun.”

Sharon decides to celebrate by taking a dip in the ocean; as she swims out Rob notices a sign warning about rip tides. Rather than calling to her, he swims after her. When he reaches her they kiss and play for a moment before turning toward the shore.

And then, in a final moment that ranks up there with the ending of “The Sopranos,” the camera slowly pulls up and away from them, until they are just little dots in the ocean who appear to be very far from shore. And as the credits roll we are left to wonder whether they will make it back.

For as raw as “Six Feet Under” could be, it ended on a note of absolute beauty, allowing the audience to witness each character’s eventual death while gradually becoming overwhelmed by gratitude and love for them all.

The hope offered by “Catastrophe” is more enigmatic. If you actually allow yourself to be in relationships, the show points out, they are terrifying, dangerous experiences. There is no guarantee of safety; in fact, the one certainty is that you will definitely and repeatedly both inflict and experience great pain. Your life will almost certainly be, at times, a total disaster. Looking at it from the outside, you would probably be better off alone.

But then again, why not give it a go? It could be fun.

I have applied for an Amazone subscription just only to watch Catastrophe this Show. I love to watch shows which contains Humanity and messiness. There were a lot of people of my age which used to do Working as a freelancer at https://cahomeworkhelp.com/pay-for-homework-in-canada/ these kind of Online sites and earned well. Even I had done this for few years in my free time but than I started watching those episodes. It makes my mind so relaxed. Thanks dear for sharing this topic with us,