In ‘Never Look Away,’ a German artist searches for the truth in trauma 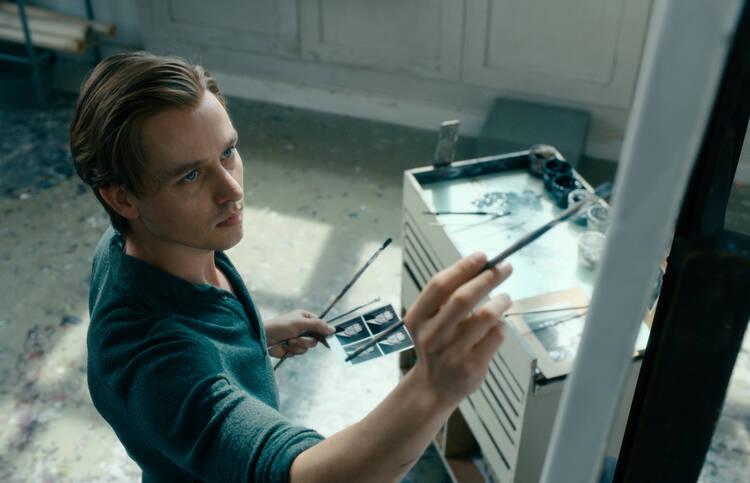 The Oscar-nominated foreign language film from Germany “Never Look Away” is a three-hour epic covering art, justice and love over three distinct periods in German history: the Nazi State, the aftermath of World War II and the ensuing emergence of the Soviet police state in the East.

The film opens with a young German boy, our protagonist Kurt Barnet (Tom Schilling), moving through a gallery space filled with modern art. His tour group is pushed along by a pompous docent who derides the modernist works on the wall. They are at the infamous “Entartete Kunst” (“Degenerate Art”) exhibition organized by the Nazi Party in 1937. “Look at this,” the docent says, gesturing at an abstract canvas, “even this child could have made it.” But Kurt’s wide eyes look at the work differently, exuding innocent, curious wonder. The kind of wonder that is unique to childhood. This kind of attention becomes the thesis of the film, his beloved Aunt Elisabeth tells him not to look away, “everything that is true is beautiful.”

Everything that is true is beautiful.

The director, Florian Henckel von Donnersmarck, forces us, the viewers, to look at the horrors of the war. We watch Elisabeth hand off a bouquet of flowers to Hitler in his motorcade, participating in a parade with a score of other giddy girls. Then we watch her suffer a mental break down, get hastily diagnosed with schizophrenia and sent off to a death camp. We watch her strip down and enter into the group shower. We look at the smile on the face of the woman with Down syndrome and watch as the nurses close the doors behind them. We watch the hand of the doctor who diagnosed her—Professor Carl Seeband—twist the valve of the gas tanks; we watch the lifeless bodies get dragged out of the room. Von Donnersmarck never lets us look away.

Sin is presented as systemic in “Never Look Away,” built into the structure of German society. Its shadow casts darkness over Kurt Barnet. In the aftermath of the war his father—personally skeptical of the Nazis, but publically a sympathizer out of what he sees as professional necessity—commits suicide after he is demoted from school principal to janitor when the Soviets take power.

While studying painting in Dresden, Kurt falls in love with a young woman, Ellie, who unbeknownst to him is the daughter of the doctor who killed his aunt. Upon learning Ellie is pregnant with Kurt’s child, Professor Seeband—a gynecologist and firm believer in eugenics—fears his genetic lineage will be tainted by the Barnet family’s history of mental illness. He successfully convinces his daughter to get an abortion by telling her that pregnancy will put her life at risk.

As the Soviet era unfolds, Kurt becomes a proficient painter in the socialist realist style. He gains popular acclaim and important commissions. His life and work are not bad, per se, just empty. There is no truth, no backbone or integrity to his art—he is just propagating the same moral bankruptcy of a new, different ideology.

As the Soviet police state ramps up, Kurt and Ellie flee to the West. He enters into the famous art school Kunstakademie in Düsseldorf, where painting is declared dead and the only thing of value is an “original” idea. In an almost comical sequence he searches for originality: he paints with his footprints, drops Pollockian drips and slashes canvases with a box cutter. His classmates get away with making potato pendulums and chairs covered in nails, but the absence of creative boundaries overwhelms him.

His professor advises him to make something true. Sitting in an empty studio bathed in light, Kurt struggles to understand what that means. A moment of realization happens when he turns to photorealism. The front page of the local paper becomes his subject matter; a photo of the captured Nazi doctor Mr. Heyde is enlarged on canvas and turned into a painting. He runs his dry brush through the wet paint, blurring the image and adding a sense of motion evoking memory. Here, he confronts his memory—the legacy of trauma in the German state—head on. He paints images based on photographs; images of his father-in-law, Professor Seeband, his aunt Elisabeth and war planes. He paints the truth.

In a moving moment that captures the intersection of our three themes—art, justice and love—Ellie learns that she has become pregnant once again. Ecstatically, the two celebrate. Kurt photographs Ellie descending a staircase in the nude. He captures a moment of pure joy. He turns the photograph into a painting; a painting that is somehow paradoxically both an unoriginal, derivative, appropriation of Duchamp and the most original, honest, beautiful painting Kurt has ever made.

The life and work of Kurt Barnett in “Never Look Away” are based on the influential German artist Gerhard Richter. “Richter was asked about the power of art,” von Donnersmarck hassaid. “The gist of what he said was that he believed this was the wrong word. For him art didn’t have any power; rather, it exists to give consolation.” In the Ignatian tradition, consolation points us toward goodness and truth: to God. When he confronts the structural sin of Nazism—in seeking truth over ideology—Richter’s early work does just that.

Where the film fails is in its inability to open up the Western ideology of free markets to critique and questioning. Today, the 86-year-old Richter is a darling of the art market. His paintings routinely fetch tens of millions of dollars when put up for auction. Where is this extreme concentration of capital coming from? Whose suffering makes this wealth possible? Is Richter to blame? No, but his complicity in this broken system is unmistakable. Von Donnersmarck chooses to look away from this reality. His near perfect film suffers as a result.

Saints (confirmed by the Church) are extraordinary. That's why they're saints (in the public sense of the word). They're known, at the time of their death to have lived according to the call of God, and to have subjugated their own egos(and will) toward that effort. Update Madalin Stunt Cars 2 full version.

The life and work of Kurt Barnett in “Never Look Away” are based on the influential German artist Gerhard Richter. “Richter was asked about the power of art,” von Donnersmarck hassaid. “The gist of what he said was that he believed this was the wrong word. For him art didn’t have any power; rather, it exists to give consolation.” In the Ignatian tradition, consolation points us toward goodness and truth: to God. AC Market is a good alternative to play store if you are tired of it.