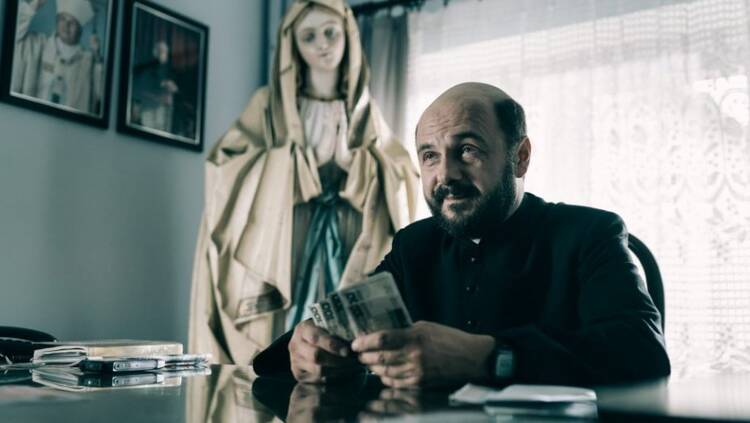 As a film that portrays priests as corrupt and willingly engaging in debauchery breaks box office records in Poland, most leaders of the country’s predominant Catholic Church have avoided comment on its salacious portrayal of the clergy.

“The film’s very popularity shows this is a free country, where artists can present their work without censorship or hindrance,” said Marcin Przeciszewski, president of the country’s Catholic Information Agency, or KAI.

“As the fictional vision of a director and his collaborators, it can’t be said to correspond with reality. But the church is content to leave its evaluation to the wisdom of its members,” he said.

“Tragic characters like these, who seem tangled in sin, are always a call to conversion,” said one Polish primate.

The film drawing Przeciszewski’s observations is “Kler” (“The Clergy”), directed by Wojciech Smarzowski. It attracted nearly 1 million viewers the weekend after its Sept. 28 release and has been seen by 5 million moviegoers since.

A senior Catholic presenter with Polish Radio said the film draws on recent sexual abuse scandals and feeds into an atmosphere of suspicion toward priests.

“If it had appeared before all this negative publicity, the church’s reaction could have been harsher,” Malgorzata Glabisz-Pniewska told Catholic News Service.

“But we know the church’s image is no longer one of pure, perfect people. The film draws on real events, and it’s clearly no coincidence that it’s been launched at this moment,” she said.

The three are encountered during a drunken evening, when they crash their car but are spared penalties by the local police chief.

While Father Leszek Lisowski, an archdiocesan staffer, hopes to be assigned to the Vatican, he is held back by his greedy superior, Archbishop Mordowicz, who is using political connections to build Poland’s largest Catholic sanctuary.

The film uses testimonies from clergy sex abuse victims and former priests and was largely shot in neighboring Czech Republic because Polish parishes refused use of their premises.

A leading priest, Father Tadeusz Isakowicz-Zaleski, denounced the film as “agitation by a militant atheist.”

Interviewed in September by the Gazeta Wyborcza daily, Smarzowski insisted his film was not anti-religious and aimed to criticize the institutional church rather than the “intimate sphere of faith.”

However, when it premiered, the film was condemned as a “caricature” by Piotr Glinski, Poland’s culture minister, and as a “shoddy provocation” by Jacek Kurski, director of the state broadcaster, TVP.

Poland’s Catholic Journalists’ Association urged a cinema boycott and a leading priest, Father Tadeusz Isakowicz-Zaleski, denounced the film as “agitation by a militant atheist” who parodied the Last Supper and ridiculed the sacraments.

Another priest, Msgr. Andrzej Luter, told the Catholic Wiez quarterly the “extremely one-dimensional” film could be compared unfavorably to the 2015 U.S. film, “Spotlight,” which chronicles The Boston Globe’s uncovering of the clergy sex abuse scandal in the Boston Archdiocese in 2002.

Meanwhile, the editor of Poland's Catholic Idziemy weekly, Father Henryk Zielinski, complained that the film’s producers had received funding from Poland’s Culture Ministry. He accused Smarzowski of “completely ignoring everything good in priestly activity and exaggerating everything bad” and fueling stereotypes as part of a “broader worldwide action” against the church.

Asked about the popularity of “Kler,” Father Pawel Rytel-Andrianik, spokesman for the Polish bishops’ conference, told CNS that church leaders would not collectively comment.

Yet some bishops have received it with cautious optimism, including Bishop Andrzej Czaja of Opole, who told Radio Doxa Oct. 2 “Kler” could shock and dishearten, but should also “make people think.”

Poland’s primate, Archbishop Wojciech Polak of Gniezno, said he feared the film would divide Poles, with some “loudly protesting it,” and others “using it to propagate anti-clericalism.”

“But such a film gives me an opportunity to reflect on my own circumstances and path,” Archbishop Polak told the Catholic Tygodnik Powszechny weekly in October.

“It summons us to work concretely on ourselves, to change our attitude and show greater sensitivity. Tragic characters like these, who seem tangled in sin, are always a call to conversion,” he said.

In the past, media attacks on the Catholic Church often have sparked private lawsuits under a Polish law criminalizing offense to religious feelings. For example, the 1994 British film “Priest,” which made no reference to Poland, provoked nationwide protests.

“It was previously assumed a priori that any film must be bad if it attacked the church. But this time, despite its negative content, people have waited to see it before reacting,” said Glabisz-Pniewska, the radio presenter.

“Times have changed, and the church has accepted it must get used to a free sphere of culture. While filmmakers have a right to express themselves, the church is wise not to give them greater publicity,” she said.

“All artists have their pet themes, and if some are fixated on portraying wickedness, then this is what we should expect if they turn on the church,” Przeciszewski said.

“But as a glimpse through the eyes of a single director, we shouldn't expect this film to have any great impact,” he added. “Huge numbers have gone to see it, because the church is so important here, but that doesn't mean they'll identify with the picture it presents. As the media has diversified here, most people have learned to keep their distance from it.”

Results of a November survey by the Warsaw-based Center for Public Opinion Research, 92 percent of Poles described themselves as religious believers, with more than half regularly practicing the faith; 58 percent viewed the church positively.

In 'The Innocents,' violence and motherhood transform a Polish convent
Raymond A. Schroth, S.J.

However, the survey said negative ratings of the church, especially among the young, had risen during the previous month and it linked the rise to the release of “Kler.”

Poles like iconoclastic films which debunk powerful people and institutions, but those with any experience of the church will see its portrait of clergy is one-sided, she said.

“The tragic image of the church presented here should be seen as a metaphor. that certain mechanisms of evil exist everywhere which enable such characters to arise,” she explained.

“However inaccurate and inadequate, a film like this can summon the church to make sensible improvements and reforms. If it highlights the hardships facing some priests, it could even have a positive, lasting impact.”