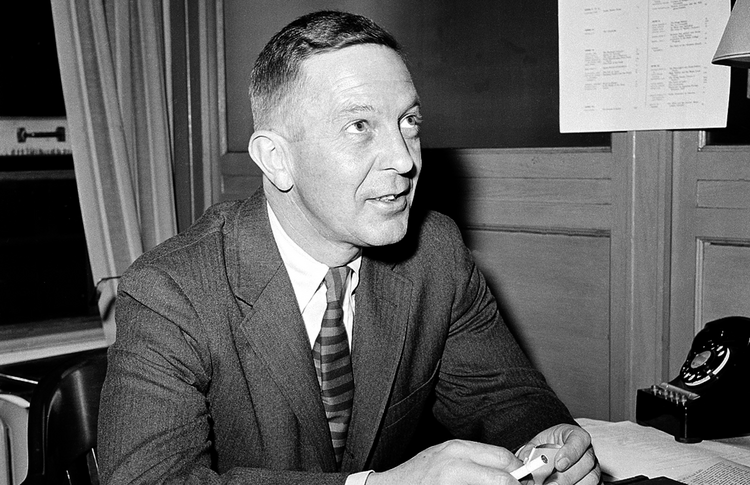 Photo of John Cheever from AP

The Dec. 24, 1949, issue of The New Yorker included a story by John Cheever, “Christmas is a Sad Season for the Poor.” While the dramatic, suffering-filled narratives that accompany Lent are perfect fodder for literature, Advent is comparably spare. The liturgical and spiritual season is, overall, one of joy: not always the best ingredient for storytelling. There is the classic Charles Dickens tale “A Christmas Carol” and even Ernest Hemingway’s Parisian essay “Christmas at the Roof of the World,” but most Christmas tales are Hallmark fare. Not John Cheever’s story.

By 1949, Cheever was prolific, appearing often in The New Yorker and other publications. Earlier that same month, his story “Vega” appeared in Harper’s, accompanied by drawings by an emerging 21-year-old artist named Andy Warhol. Although Cheever was a stylist of suburban languor—think his masterful “The Swimmer”—his city stories are equally slick.

The simultaneous pull of love and sadness is pure Cheever and permeates his Christmas story.

In a 1953 journal entry, Cheever wrote of taking his son Benjamin to the Central Park skating rink on Christmas Eve. The boy was “made timid by the strangeness of the place and hour” and repeated everything Cheever did and said. Cheever notes that he had never been out in the city on that particular night: “There were jocular groups on street corners, people going off to parties in evening dress, a young man with a package and a dozen roses hailed a cab—but, perhaps because of my own mood, whole neighborhoods seemed desolate and forsaken and I felt myself sad and alone.”

That simultaneous pull of love and sadness is pure Cheever and permeates his Christmas story. “Christmas is a Sad Season for the Poor” is about Charlie, an elevator operator in New York City, who wakes at six in the morning on Christmas Day. He is “practically the only one” awake in that “cold black.” He had spent the previous night in an “amorphous depression” that led him to one conclusion: “Christmas is a very sad day of the year.”

Unlike the “millions and millions [who] were sleeping” that holiday morning, Charlie leaves his room in a boarding house, eats breakfast and takes an elevated train uptown to Sutton Place, where he has been working as an elevator operator for the past six months—a job he has been doing in various buildings for a decade.

Elevators abound in Cheever’s fiction. They were a part of his daily life. It is literary lore that while living in an apartment building on that same Sutton Place, Cheever would put on a suit each morning and ride the elevator down to a storage room in the basement, where he wrote in his boxers. Elevators were for lifting and lowering; a place of transportation and transformation.

Charlie puts on his uniform, which includes a “false ascot,” and relieves the dozing night elevator man from his quiet shift. Charlie soon learns that the day doorman is sick, so he will need to work straight through Christmas lunch.

He cannot hold back his unhappiness. Mrs. Hewing, who wore “a long dress under her fur coat,” is the first to hear his lament. Charlie says Christmas “isn’t much of a holiday for me” because he lives alone and “I don’t have any family or anything.” Mrs. Hewing is the first of many people to claim empathy with Charlie, but those sentiments are empty. Charlie’s days are full of short, sharp interactions—moments where he guides others toward their destinations—but most of his time in the elevator is spent alone.

Charlie thinks of the thousands of miles that he has traveled in a “six-by-six elevator cage”—how he really has not gone anywhere over the years. He fantasizes about rising out of the building and riding the elevator car “through the mists above the Caribbean” and landing “on some coral beach in Bermuda.”

Those reveries are cut short by the monotony of his job and the refrain of his sadness. Charlie tells every passenger of his malaise, and although a fair number of them also seem lonely, they are not poor. Charlie frames the predicament through the experience of a child, who spends the Christmas season walking by store windows, hearing promises of gifts, “and then when it came Christmas morning, how could you explain it, how could you tell them that Santa Claus only visited the rich, that he didn’t know about the good?”

Charlie reaches his lowest point when he begins telling the elevator riders that he has children: four living, two deceased. “The majesty of his lie overwhelmed him.” As the day wears on, smells of “bacon and coffee” and “poultry and game” waft into the elevator shaft. Soon the residents begin bringing Charlie drinks, food and gifts. He cries in joy at the bounty: soup, creamed fish, goose and lamb chops. Pheasant, grouse, pigeon, trout, scallops, lobster—and then eggnog, mince pies and plum pudding. Not to mention the gifts: an alligator wallet, steak knives, shirts, a glass teapot and even gifts “for his imaginary children.”

Charlie feels guilty about those gifts, but he washes it away with drink: the employee locker room full of “the dregs of Martinis, Manhattans, Old-Fashioneds, champagne-and-raspberry-shrub.” Drunk, he forgets his problems and shoots up and down the building, the elevator at full speed. But when he picks up a woman during his victory jaunt, he takes his hand off the controls and yells “Strap on your safety belt, Mrs. Gadshill! We’re going to make a loop-the-loop!”

Horrified, she crumbles to the floor of the elevator car and then runs off upon landing. Cheever begins the next paragraph with a grim sentence: “The superintendent fired Charlie and took over the elevator himself.” Direct and final, the sentence carries the same gravity as the final paragraphs of “The Swimmer”: the sense that our lives can take sharp, dark turns in an instant or when our delusions are peeled away.

Charlie thinks of his landlady at the rooming house and “her three skinny children” sitting in the building’s basement. He stuffs the presents in a burlap sack, takes a taxi back to the Lower East Side and unloads them on the landlady’s floor. He watches the children open half of the presents and then goes “upstairs to look over the things he had been given himself.”

It is the last we see or hear of him in the story. The reader remains in that basement room with the landlady and her children. Once Charlie has left, she steps between them and the unopened presents. “A beatific light came into her face when she realized that she could give,” Cheever writes, “that she could bring cheer, that she could put a healing finger on a case needier than hers.” Love quickly turns to charity, which then becomes “a sense of power.” She hurries the children to gather the gifts, for “she knew that we are bound, one to another, in licentious benevolence for only a single day, and that day was nearly over.”

Cheever was a lifelong Episcopalian with a stern formality to his conception of faith—possibly an attempt to counter to the struggles of his life: alcoholism, his shame and guilt over his sexuality and his financial instability. He once wrote in his journal of arriving “unsober” to church, where “the priest has improvised a Mary chapel where there is a blaze of candles and someone keeps the vigil. I find all this offensive; say my prayers,” and then leaves.

His grand conception of God meant the real world—city or suburb—often felt inadequate. Perhaps Cheever felt the same melancholy as Charlie, moving up and down in that small, quiet box. What Charlie wanted more than food or frills was to be cared for; he wanted to find peace. Cheever’s story, however depressing, offers us a reminder about Advent: to give is better than to receive, but to love is best of all.

I was not yet a schoolboy in 1949. Christmas in festive New York have been very sad for single older men without families or a rich cultural and/or spiritual inner life. I remember the Christmases of the 50's in our relatively poor So Bronx immigrant neighborhood as rich and wonderful. I had no expectation of Christmas presents (except maybe socks or underwear wrapped festively) but that did not matter. It was family and neighbors (including Jewish people) and guests and breakfasts and feasting that mattered. We put up the tree Christmas eve because that;s when you could buy one for 50 cents, even if you had to tape branches to it to make it look full. My mother hosted an after Midnight Mass breakfast where neighbors trooped by until almost dawn. (bakery bread and rolls, no supermarket fare; and fresh butcher shop bacon and sausages and fresh eggs delivered to the doors from the truck farms in the north of the Bronx. and Westchester We kids stayed up to hear the stories and the poems and the songs, with Christmas music playing in the background when no one was singing or plating an instrument.. Often there was snow. Later we went to a better off relative's place where many gathered and there was a big turkey or two, a ham, and a roast beef. All sorts of vegetables and potatoes and onions and a variety of deserts and freshly brewed coffees and teas. It wasn't that we kids went without toys. A group of us bought all the things we wanted - tinker toys, erector sets, elaborate rubber armies, and tropical fish. We pooled our money year round and at various times, including Christmas, the adults slipped us a dollar which went into our collective toy fund. Christmas lasted with the visiting and feasting until Little Christmas on Jan 6. The Christmas window displays we saw were on our neighborhood's shopping street.

This article also appeared in print, under the headline “John Cheever's sad Christmas story,” in the December 10, 2018, issue.